It is ironic that comments in the on-going election campaign should be so slighting towards the Chinese, who did their part in WWI on behalf of New Zealand.

A recent article in the NZ Herald, as part of its memorial to WWI soldiers, recently printed a story about a Chinese NZ citizen who was recommended for a Distinguished Conduct Medal.

His name was Private Herbert Stanley Sing and was one of four brothers who, along with another possible 150 Kiwi/Chinese, also fought in World War I.  He was on the Western Front in July 1916 when enemy shells rained down, and although he had survived Gallipoli, he was not so lucky this time.  His brother Albert, who was in a nearby trench, said that the onslaught began at 10pm and they had to endure 4 hours of it before it ended.

Unfortunately, Herbert didn’t receive his Distinguished Conduct Medal as it had been omitted in his war records but his mother received  the Dead Man’s Penny instead – a little bronze memorial plaque. 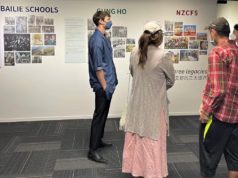