Christchurch and Gansu province in north west China have enjoyed a strong and active sister city relationship since 1984. The relationship came about at the direct request of Rewi Alley.

Since the opening up policy adopted in 1978, China has lifted over 700 million people out of poverty. Its central government has set out the goal of eradicating poverty in rural areas by the end of 2020. As one of the most poverty-stricken provinces, Gansu determined to send its government officials from provincial departments to the poorest villages to help.

Here is a heart-warming story of good deeds in Gansu. Since August 2017, the Gansu Foreign Affairs Office (GSFAO) has had an annual programme of helping two poor mountain villages in the Linxia Hui Autonomous Prefecture in southwest Gansu. These areas, 2200 metres above sea level, have one of the poorest economies in China, as well as a lack of education and industry, and see lots of early aged marriages. The young men usually go to Qinghai, Xinjiang or other provinces to earn a living. Each family grows potatoes, winter wheat, and cattle.

One of the villages is Yebuwan, home to 1088 people from 232 families. Over the past two years, the GSFAO has helped the village with two million Yuan of goods and money.

Some measures of support from the GSFAO are as follows:

In addition to the two million Yuan of goods and money given by the GSFAO over the last two years, funding to support these activities has also come from businessmen and foundations in Gansu, Hong Kong, Macao and other overseas Chinese, as well as foreign foundations.

Each GSFAO staff member links with two families, and visits the village every season, usually four times a year. Each time they spend about 7-8 hours on the road, and about 3 hours visiting families. They don’t live in the village, and pay their own lunch and dinner. The staff members work with the village committees and help with most jobs.
The staff are paid a stipend of meals and transport and mobile fees, in addition to their monthly office pay. They live in the town government building and go to work in the villages every workday. At the weekend they take the bus to Lanzhou if there is no temporary work. This is called grass root working experience that will benefit their work career in government.

Before August 2017, the GSFAO supported another two villages for a couple of years, where they did similar work. 2020 is the year the Chinese government has promised to get rid of absolute poverty and realize a well-off society in both rural and urban areas. The central government has made it clear it will not cease in its efforts to support poor rural families after 2020. As part of this, the GSFAO will continue to send staff and support the village to make them stronger and better. It is expected to continue for several years. 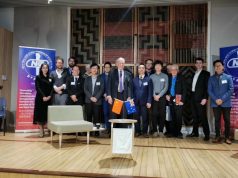 Report from Auckland Branch on Public Meeting held on 31 July 20...