An Introduction to Mahjong (or, an opportunity to build on your skills!)

Come along and learn the art of the game of Mahjong. We will have several sets available, and simple instructions on how to play, as well as a number of skilled players on hand to help you along. This is a traditional Chinese game and is lots of fun. 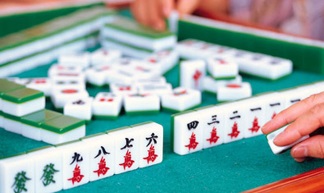 Upcoming Events (be sure to put these in you diary!)

28 April: An Introduction to Mahjong.

Let’s be honest, we all love dumplings! If you don’t know how to make your own, here’s your chance – and it’s free!! Come along for an afternoon of fun and learning. Details below: Anyone for Yum Cha

The Kumara Resident Trust had a stall at this 12 March event. The stall was used as a fund raiser and publicity event for the Kumara Chinese Miners Memorial Reserve project (see the story in our January 2016 newsletter). They sold ducks heads, necks, wings (in fact everything except the quack!!) and dumplings. They had three Chinese men from Christchurch helping out with the cooking and selling of the food. The main aim of the stall of course was to publicise and explain the plans for the reserve, designed by Erin Diao (in the bottom left photo) of Chris Glasson Landscape architects. Because the stall had the Chinese flag flying, they had a lot of people not only checking out the food but what they were fund raising for. They displayed the plan at the stall site, which drew a lot of attention and positive comment, including plenty of media articles and photos in the three local West Coast newspapers about the food items, lots of photos on Facebook as well as TV3 and TV2 news. And the icing on the cake occurred when they were runner-up in the best stall (50 stalls) competition! 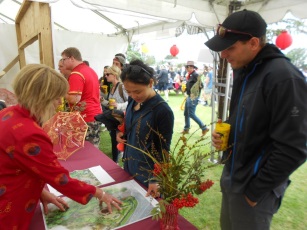 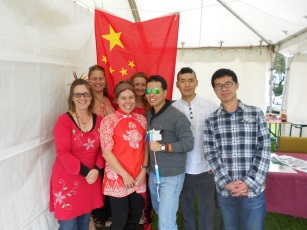 When I was in my home town of Invercargill recently, I was delighted to see in The Southland Times that a Chinese garden is to be built in Queens Park, to recognise Invercargill’s sister city relationship with Suqian, Jiangsu province, which was formalised two years ago. Chinese delegates will visit Invercargill in the next few months to choose a location for their garden in Queens Park. Concept plans are currently being developed by the council, but at the moment a completion date for the garden has not been confirmed.

Building on the new sister city relationship, the Southern Institute of Technology (SIT) has established a new international education scholarship, which has been matched by a similar scholarship from Suqian City. Both sides are also looking at doing three week exchanges, to introduce the students to SIT and the study options.

Bill Willmott has sent me these four links to very interesting stories about his birthplace of Chengdu; they are well worth the read.