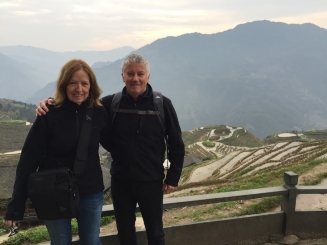 George has just returned from three weeks in China, visiting a wide range of locations and practising his beginner language skills.  He is going to share his experiences of the people and places including the buried army, Tiananmen Square, the Great Wall, the Summer Palace, the Temple of Heaven, minority groups, a kiwifruit co-op supported by the NZCFS, ancient villages and bullet trains, and more! He also has videos to watch and experiences to share. Come along and have an enjoyable night!

Our financial year ends 31 December, which means annual subscriptions are now due.
If you have not already done so, can you please pay your 2016 subscription within the
next two weeks.

You can also use the Membership Application form on our website:
https://nzchinasociety.org.nz/join-now/christchurch-branch-membership-application 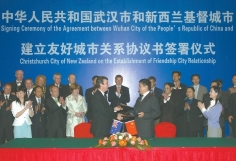 Time certainly goes fast! It’s hard to believe it is ten years since then Mayor Garry Moore travelled to Wuhan in 2006 to formally sign the sister city agreement between the cities.

To commemorate the anniversary, a delegation, led by Deputy Mayor Madam Liu Yingzi visited Christchurch in April. On the first evening, a welcome banquet was hosted by Mayor Lianne Dalziel, which was attended by previous mayors Garry Moore and Bob Parker, as well as Consul-General Jin Zhijian and prominent members of the local community, both Chinese and Kiwi. Mayor Lianne emphasised the success of the relationship to date, and thanked then mayor Garry Moore for having the foresight to establish it and previous mayor Bob Parker’s work in developing and strengthening it.

The following day the delegation attended the opening of the Chinese Art in Oceania, exhibition at the University of Canterbury, which was organised by the NZ Hubei Economy Trade Culture Association and was held as part of the celebrations. Hundreds of distinguished guests and visitors enjoyed the grand opening ceremony. Over a three day period, four renowned Chinese artists JIANG Changzhong, QIN Ling, FAN Feng and XIE Xiaohong brought their great artworks to Christchurch, as well as giving demonstrations of their talent. 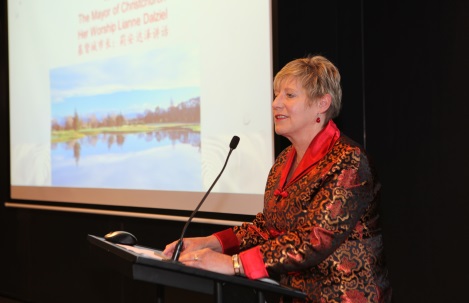 In addition to the speeches of the organizer, Christchurch mayor and Wuhan deputy mayor and others during the opening ceremony, there was a performance of a violin solo called Sarasate Zigunerweisen, by Anne Kiriaev, and group dancing. At the end of the opening ceremony, Pokarekare Ana was sung by Maori performers and all guests.

Over the next two days, the exhibition was visited by thousands, and given demonstrations of the artists at work.

With this programme, Lanzhou City University hopes it will deepen the already strong relationship it has with the Ara Institute (previously the CPIT) and our society. Applications are being called for at the moment, so if you know someone (perhaps yourself?) who could be interested in this exciting opportunity, please contact branch president Chris Goodwin 0274223142 [email protected] for further details.

Several of you will remember Karen, who works for The Chinese People’s Assn for Friendship with Foreign Countries (Youxie), where she works in the Dept of American & Oceanian Affairs. Karen has been to Christchurch many times over the last few years. She is currently the society’s Margot Cornwall scholar at Waikato University in Hamilton. During her term recess she travelled with her mother, Xiaoning, who is in New Zealand for four weeks. After spending a week travelling the length of the South Island in late April, which included their being generously hosted by our Nelson branch, they spent their final two days in Christchurch. This was Karen’s holiday time, so she asked if she could touch base with branch members she knew from tours etc. Carol and I had Karen and her lovely elegant mother to dinner on the Friday evening. 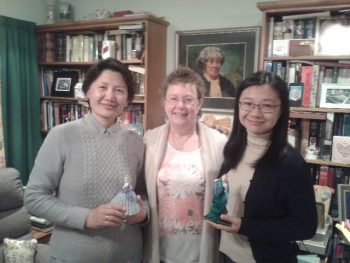 On the Saturday Bill Willmott and Di Madgin hosted them to afternoon tea. Eric and Judy Livingstone came along as well. Di’s garden was looking a real picture, so the visitors very much enjoyed it (especially picking the ripe raspberries!). And to add to the occasion, by a happy co-incidence Bill and Di had two Canadians visitors, Marion and Judith, who had grown up with Bill as children in Chengdu. What a treat it was for us to sit back and listen as Bill, Marion and Judith reminisced about their Chengdu days, complete with old black and white photos from those earlier times!

Our April meeting was an evening of mah-jong, and what great fun it was! Like a lot of games, I realised it is not difficult to quickly pick up the basics of it, but, the devil is in the detail!! About 12 of us had an evening of fun and laughter; we should do it again.

Have you registered yet for our annual conference, which this year will be held in beautiful Tauranga? The theme of the conference is Hǎo shì duō mó – 好事多磨 – “Good things take time” Registration is $140, so don’t; forget to register for this great conference!

Details of the conference programme are on our website.

Our branch’s 17 April dumpling afternoon was a huge success. The event was organised jointly with the Christchurch Educated International Student Association at the Rewi Alley Education & Cultural Centre.

40 students joined us. They were mainly from China, Singapore, Germany and one or two other countries. The students were taught how to make dumplings and played mah-jong afterwards (although with stomachs bulging with dumplings you have to wonder how good their concentration was!). Altogether, 500 dumplings with three different flavours were made, accompanied by much laughter and fun. Overall, it was a great success for our society and a very fun afternoon.

It was a happy, but also sad, crowd of well-wishers which gathered recently at the University of Canterbury to bid farewell to Professor Hong Hu, on her retirement as deputy director of the Confucius Institute since its inception six years ago (in fact she arrived in the city just a few months before the first big earthquake in September 2010!!). As Mayor Lianne Dalziel pointed out in her address, usually the appointment is only for two years, but that it was to Professor Hu’s credit, and a recognition of her ability that she was kept in the role for much longer. Consul-General Jin Zhijian paid tribute to what she had achieved. She is returning to Beijing for a well-earned retirement, although one suspects that given her work ethic during her time with us, she won’t be exactly resting on her laurels!!