Through cross-cultural experiences, her life has been like a Persian tapestry, full of vibrant colours and bold patterns. Born in mountainous Xinjiang; lived

Born in mountainous Xinjiang; lived in the glamorous city of Shanghai; refugee in Hong Kong; eight years in Paris; married to a Bavarian in Sydney; since 1970s settled in the Garden City of Christchurch with family.

Luba will tell us about the next stage of her very interesting life. Those of you who were at her April talk won’t want to miss the next exciting episode – those who weren’t there, should be!! 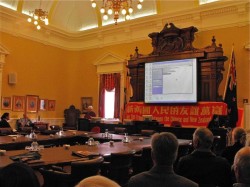 Where do I start? What a great conference! This was my first, although I did speak at the Christchurch conference several years ago. Because we have an excellent conference report in this newsletter from National President Eric, as well as one on the AGM from Deborah, I’m not going to go into detail, other than to say again what a great time it was. The branch representatives at the conference were myself and Deborah Rhode, and of course we also had Eric and Judy, Bill and Di and Ailsa Dodge; a great representation, which was commented on by several delegates.

The quality of the speakers was truly amazing, and the weekend was capped by Wang Lidan (Linda) giving us a talk on Sunday about her time here, and specifically what it was like to have her first lecture on her first day at University of Canterbury cut short by the February earthquake! Her humour, her sparkling personality and her use of the English language as she told us about her experiences that day had us all entranced! She even worked with the Student Volunteer Army! What a remarkable young woman! I hope you all come along to our 25 June farewell banquet for Linda; it’s going to be a great night!

Attending the National Conference and AGM was definitely the highlight (so far!) of my time as a member of NZCFS. For the first time I really came to understand the depth and breadth of the organization, the work of the other branches and the work that NZCFS carries out in China itself.

There will be reports from others on other aspects of the Conference – my brief is to report on the AGM itself.

Christchurch had the largest delegation – while Dave Adamson and myself represented the Christchurch Branch, Judy, Eric, Di and Bill were in attendance as members of the National Executive. Ailsa attended as an independent member

Eric chaired the AGM as National President, giving an opening welcome speech and later a President’s report. The Report on the Development and Earthquake projects was given by Sally Russell and Dave Bromwich reported on the Gansu Co-operatives. (A transcript of these reports is available on request).

The Branch Presidents reported on their activities for the year, which gave us all a good understanding of how other branches operate, how they interact in their respective communities, how they attract members and carry out fundraising.

Highlights included the Hamilton Branch’s interest in the migration of the Godwits as regular China-NZ travelers and the importance of preserving and maintaining their habitat at the Miranda Shore Bird Centre; the work of the Whanganui Branch to foster business links with local firms and China, and the recently reinstated Dunedin Branch venturing into local radio.

Two Remits were proposed, the first in regard to the appointment of a proxy to the AGM when a Branch President has been elected to National Executive. The second remit regarded changing the cut-off date for membership to the Society. Wellington Branch proposed that if a member was not financial by the end of the first quarter, they should be struck off the membership. Christchurch Branch felt that this did not give enough time at the beginning of the year for members to receive their renewal advice and act on it, so proposed an amendment for the date to be April 30. This was passed

The National President proposed his vision and goals for the Society for the next three years, for discussion; these will no doubt be covered more fully in Eric’s report. (A detailed copy is also available on request). Bill Willmott reported on the Prominent Persons and Leaders Delegation in September 2010, which was an extremely well received tour and much enjoyed by all who took part. Jenevere Foreman presented a report as Chair of the Languages Committee, and also discussed a new volunteer programme for teachers who were unable to obtain a work permit due to age. (Foreign teachers over age 60 are not able to obtain a work permit). The short-term programme is about to begin with a trial in Hong’an County, Hubei Province. The teaching commitment would be for four hours a day for two weeks, followed by a tour for one week. Three positions have been advertised for the October trial, with positive results.

An election for the National Executive positions was not necessary as one of the applicants withdrew his nomination at the start of the meeting. All the incumbent officers were re-elected.

In the 26 February issue of the New Zealand Listener there is a very interesting article about New Zealander David Mahon. He has lived in China since 1984, when he first went to Beijing to lay carpet in the Great Wall Hotel! He says “I had a very fundamental experience. Here, people lived by the most basic needs. There was no luxury and little personal freedom, but there was this tremendous energy”. He was hooked! He now runs an investment firm, and provides corporate advisory and independent research services to companies doing business in China. He produces a quarterly newsletter, China Watch. Go to http://www.mahonchina.com and click on China Watch; it’s a very interesting read.

The Year of the Rabbit

Like the houses of the zodiac in Western astrology, the animals of Chinese astrology are thought by many to dictate personality traits or, in the wider scope of things, even impact world events in any year they rule.

Characteristics of The Rabbit

The three words that best describe the rabbit? Calm and gentle, but persistent.

Quietly charismatic, thoughtful and calm, rabbits are admired for their tactful and considerate dealings with all who know them. As such, they are most often depended upon for their wise counsel, or as someone in which to put valued trust in a personal friendship or a business dealing.

One of the most cautious signs in the Chinese zodiac, they are the chess players who take their sweet time before making a move. Yet, they are also the ones most likely to win any intricate game of strategy!

The last surviving Chinese who paid the £100 poll tax has died. He came to NZ in 1920 at the age of 9 to work in his father’s shop in Invercargill, later moving to Timaru and finally to Christchurch, where he ran a market garden on Cashmere Road with his wife Alice and their nine children. His son Matthew built their distinctive four-storey house with the curved roofs. Percy was a champion cyclist and wrestler as well as horse trainer and pilot. His wife Alice died three months ago. Percy was in his 100th year, so already 100 by Chinese counting. Many people attended his funeral on June 3.