This month’s speaker will be Luba Roth. You will remember how popular she was when she spoke three times in 2011!! You could say she’s back by popular demand! Luba’s had a very interesting life, as those of us who have already heard her speak know. Come along and hear the next episode!!

Put it in your diary.… our 30 May speaker will be Royden Smith of the Nelson branch. In January he went to North Korea. He tells me that when he spoke on the visit at his branch’s March meeting, there was such a crowd they almost had to turn people away. We haven’t decided yet, but we may start the meeting at 7.00pm so that Royden has time to give us his full fascinating presentation on what is a very topical part of the world at the moment. Be sure to put it in your diary! More info in next month’s newsletter.

Be sure to register for this great conference! With no travel or accommodation costs it’s the cheapest conference you’ll ever attend! Documentation is on the following pages. Let’s make this the biggest one ever!! And please bear in mind we will be calling soon for a number of volunteers to pick up on various tasks during the conference; many hands make light work!

This very successful event was held at the Aurora Centre, Burnside High School over Easter. On Friday 29 March more than 700 people, including Chinese Consul-General Mme Tan Xiutian and her staff along with other VIPs attended the opening ceremony and concert, entitled “A Journal through the Decades”, a multi-media video presentation on the history of the early Chinese migration to the gold mines in Central Otago and the early NZCA Easter Tournament, from its start it 1948 to the present day. 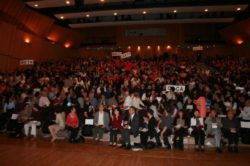 This was the beginning of an enjoyable and successful three and a half days of sporting, social and cultural events, held in various venues in Christchurch over the Easter weekend. The formal Tournament Ball and dinner was held at the Russley Golf Club on the Saturday evening, where the trophies were presented to the winning teams. The Canterbury Branch won three trophies. A mix of basketball, lawn bowls, golf, Chinese opera, line dancing, other dances and kung-fu combined with superb Easter weather all added up to a great weekend for all concerned. The tournament hosting rotates between the four main centres (Canterbury, Wellington, Dunedin, and Auckland) and will be held next year in Wellington.

With kids like this, now I see how they were able to build the Great [email protected]! Obviously there’s no OSH in China!! Maybe he’s working on one of those tower blocks they put up in 10 to 15 days!! http://static.video.qq.com/TPout.swf?auto=1&vid=r010673xh67