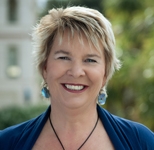 Nicky Wagner was elected to parliament in 2005. Earlier this year she travelled to China, and by all accounts had a great time there! In fact she had such a great time she wanted to come along and tell us all about it, so of course we’re going to let her do just that! Come along and hear what will undoubtedly be a very interesting talk on her perspective on China by a member of the government.

Congratulations to Janine Morrell-Gunn on being chosen as our branch’s prominent person on the leaders and prominent persons tour of China this September. We know she’s going to have a great experience.

Philippa’s father, Pip Alley, was Rewi Alley’s champion in New Zealand throughout the Cold War years. Philippa told me she remembered Pip sitting down to write to his brother in China every Sunday morning when her mother went to church. And, of course, she met her famous and infamous uncle during his rare trips to New Zealand.

So when she returned from England to live in Christchurch in the mid-1990s, she was keen to join the CCC’s Christchurch-Gansu Friendly Relations Committee. And when we were planning the celebrations of Rewi Alley’s centennial for 1997, Philippa volunteered to write a biography. The committee’s aim was a book for high school students with the assumption that it would suit the general public as well. Philippa wrote a highly readable biography, based on a considerable amount of research in various archives as well as interviews and her own memories. It is easily the most accessible of the three biographies and one autobiography and has been an important resource for the sister-city committee.

As an active member for two decades of both the Christchurch-Gansu Committee and the New Zealand China Friendship Society, Philippa contributed greatly to better relations between New Zealand and China. She went to China for the first time in 1997 on the Rewi Alley centennial tour, “In the Footsteps of Rewi Alley”, and she was going to go a final time this coming September on the NZCFS 60th anniversary tour. Alas, not to be.

Philippa’s wonderfully enquiring mind was interested in everything. And she had a truly attractive manner: quiet and modest but out-going and friendly. She was well loved in Christchurch and already sorely missed when she moved to Nelson. We are deeply sorry that her happy life there has been cut short.

at the moment the hunt is on for a suitable venue, which, not surprisingly with the number of suitable venues lost to earthquakes is proving to be a bit of a challenge. However, we expect to have the venue and dates confirmed within the next two weeks.

starts in Christchurch on August 9th and this year the programme includes three excellent films about China, Ai Weiwei: Never Sorry, 11 Flowers and The Red House.

You can read about these films on the website by clicking on the titles below:

International Drama at the Court Theatre

“A significant coup for New Zealand theatre,” is how Artistic Director of The Court Theatre Ross Gumbley describes upcoming production MAN IN A SUITCASE, which will be toured to Beijing after its world première season at The Court Theatre.

MAN IN A SUITCASE has been developed in collaboration between The Court Theatre and the Peking University Institute of World Theatre and Film in Beijing, with support from the international development wing of Creative New Zealand. Strengthening the international connection, three members of the cast and the set designer have travelled from China for the production.

Playwright Lynda Chanwai-Earle has created a “story of people who live out of suitcases – and die in them,” inspired in part by the true story of a Chinese student whose remains were found in a suitcase floating in the Waitemata harbour. While the play explores dark territory, Chanwai-Earle has laced the script with black humour and embraced the “horrific ridiculousness of the situation.” At its heart, however, Chanwai-Earle says MAN IN A SUITCASE is “about displacement, wanting to fit in and get on in New Zealand.”

American Director Joseph Graves, who has lived in China for the last decade as the head of the Institute, leapt at the challenge to develop and direct MAN IN A SUITCASE.

During the play dialogue is spoken in English, Cantonese and Mandarin, with subtitles projected onto the set. This has offered a challenge for a number of the actors and will give a unique experience to audiences.

Chanwai-Earle has incorporated the earthquakes into the finished piece, which is set in Christchurch, and “walked a tightrope to honestly reflect the events without it derailing the play.”

NOTE: the interesting thing is the playwright, Lynda Chanwai-Earle is the daughter of Mike Earle, husband of Hawke’s Bay president Sally Russell. 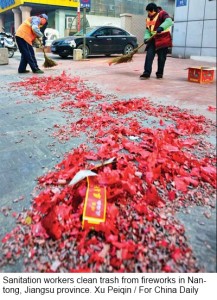 Sun Ruoran believes this year’s Spring Festival was quieter than most. The 13-year-old Beijing resident understands why, because she, too, has lost enthusiasm for the tradition of heralding the Lunar New Year’s arrival with fireworks. “Mom asked if I wanted some firecrackers, but I’m not as interested in them as I used to be,” she says. “They are dangerous and scary, despite moments of brightness.”

Her family lives in a 16-storey building near the Asian Sports Village on the northern Fourth Ring Road, where limited fireworks are allowed during the holiday but large rockets are forbidden. She recalls her neighbors drove to nearby counties to buy massive stocks of roman candles and bottle rockets in 2007. “Almost all our neighbors were out setting off, or at least watching, fireworks just before midnight that Lunar New Year’s Eve,” she says. “The whole yard was roaring with explosions and car alarms were bleating. It made the night fun.”

This year, Sun stayed at home and made e-cards online, while her mom and grandparents watched the Spring Festival TV gala. Her upstairs neighbor, who bought fireworks in 2007, did not set any off either, because the family now believes fireworks are “expensive, dangerous and heavily polluting”. “Kids grow up,” Sun’s mother says. “And they have various ways of celebrating the New Year.” The families aren’t alone in their diminishing zeal for pyrotechnic celebrations this Lunar New Year. The amount of trash from fireworks decreased by 16 percent compared to last year’s 5,500 tons, the Beijing-based Jinghua News reports.

Vendors also say sales are down. “Business is harder than ever,” says a 40-year-old vendor surnamed Ma, who has been selling firecrackers on the Third Ring Road since 2008. Sunday, the day before Lantern Festival, would usually be a time for business to boom. But at 9 pm, she and her partners were still waiting for customers. Two college students stopped by but left after asking about prices. “We feel like people don’t like fireworks anymore,” Ma says. “We may quit next year.” Ma says she and her partners stopped selling fireworks at 11 pm – two hours earlier than usual – this Lunar New Year’s Eve.

But the decrease in fireworks purchases isn’t confined to Beijing.

Zhang Fang, a 40-year-old who has been selling firecrackers in Anhui province’s capital Hefei since 2006, says she only sold 70 percent of her stock this year. “2006 and 2007 were the best for the fireworks business,” she says. “The maroons usually sell out on Lunar New Year’s Eve. I feel people weren’t willing to spend that much on fireworks this year.” Most of the unsold fireworks at Zhang’s store are priced at more than 70 yuan ($11). She says the 10-yuan maroons finally sold out on the sixth day of the Lunar New Year. Increasing air pollution concerns contribute to the decline in fireworks sales.

Chen Liwen says she didn’t set any off when she visited her hometown in Cangzhou, Hebei province, this year. “Fireworks were indispensable to the Spring Festival celebrations of my childhood,” the 29-year-old says. “My heart raced when they exploded. But now, I really hate the dust and trash, and the smell of the smoke that lingers for the entire festival.”

Lu Hai, a chief resident of Beijing Tongren Hospital, which is famous for advanced eye treatment, has for years been advocating that people refrain from setting off fireworks during the Lunar New Year. He is happy to know fewer fireworks have been set off this year.

Media often interview Lu around the annual holiday, and he takes the opportunity to advocate re-instating the fireworks ban. “Spring Festival should be a merry time of family reunions and thankfulness for the good things we have,” he says. “But every kind of firework is dangerous and polluting.” He vividly remembers a 26-year-old man surnamed Liu, whose left eye had received successful surgery in October, but returned to the hospital during the Lunar New Year with that eye blown apart by a bottle rocket.

“I sincerely hope to see the decline continue,” Lu says.

Love That Job – Hawke’s Bay people talk about their jobs

on Radio Kidnappers . . . Dave Bromwich and Sally Russell are members of the Hawke’s Bay branch (Sally is President). These talks are very interesting and well worth a listen.

Now that we have your attention, there are still a few tickets left in the society’s raffle, first prize of which is two return tickets to China!! Ask any committee member, or contact Dave Adamson (details on front of newsletter). $1 from each ticket sold goes to the branch; a very easy method of fundraising for us.

Although I write the newsletter, that doesn’t mean I have a monopoly on all items of likely interest for it. If you think you have information or a story that would be of interest to our members, please let me know; I’m always looking for good stories.