The first meeting of the year always includes the branch’s Annual General Meeting. Please give some thought between now and then as to whether you would like to stand for the committee. This is an opportunity to become more involved in our society’s activities. We are all committed to the NZCFS; here’s your chance to give your talents to achieve the aims of our organisation

A warm welcome to new branch member Henry Acland, who is based in Beijing and works for Xinhua News Agency’s TV arm: CNC World.

On the evening of Monday 9 December, we held our annual prize giving ceremony at the CPIT. This is always a very happy event, with proud parents, siblings, grandparents, teachers etc present. This year was no exception, with about 100 people coming along. Consul General Tan Xiutian presented the prizes. Entertainment was provided by Luke Bulger (song and guitar) and two lovely Lincoln Primary School girls, Holly Hance and Lauren Cooper. Luke was also the keynote speaker, with a very interesting talk on shortcuts to becoming bilingual. This annual ceremony is very important, and a matter of great pride for all those taking part. A big Thank You goes to the CPIT for providing the facilities each year.

This is always a great banquet; make up a table with friends and come along and have an evening of fun and food.

An Important Visit from our Sister City

In early December we had a visit from our sister city of Wuhan by Mr Yu Xi a well-known writer, painter, photographer, journalist, and international cultural exchange activist. He was accompanied by Mr Zhou of the Wuhan Foreign Affairs Office and Ms Xiong. Mr Yu Xi has already interviewed more than 40 heads of state and government leaders and more than 100 ambassadors to China. Over the years, he has become friends with many government leaders. Many heads of state have attended Yu Xi’s cultural exchange activities.

He was here for three days for a series of interviews and site visits, the outcome of which is going to be a book he will write on the Wuhan/Christchurch relationship. We were able to arrange interviews for him with Mayor Lianne Dalziel as well as previous mayors Bob Parker and Garry Moore. He even happened to meet previous mayor and now Deputy Mayor Vicki Buck as we entered the mayor’s lounge, so I was able to tell him later that in his short visit he met all four current and previous mayors! A visit to a dairy farm near Darfield was of huge interest to him, and this was topped off by a barbecue at the Darfield farm of our China sister cities chair Bernard Duncan. Add to that a visit to Lincoln University, the Confucius Institute, Canterbury Museum, Botanic Gardens (beautiful sunny day; don’t think there was flower or tree he didn’t photograph!) the Rewi Alley Memorial at Springfield, witnessing a kapa haka performance at a citizenship ceremony, Quake City tour and dinner with Consul General Tan Xiutian and it really was a whirlwind tour of experiences for him.

Our relationship with Wuhan is of huge importance to Christchurch, and I am very happy to report that he left us with his eyeballs spinning!

The following day, I and Bill Willmott met Ambassador Wang, his wife, son and several members of the consulate at the Rewi Alley Memorial in Springfield, at which time Bill was able to explain the history of the monument and memorial to Ambassador Wang. To add a nice touch to a very successful visit on a beautiful day, some children from Springfield Primary School happen to come along with a teacher, and the upshot of that was they took us into the school grounds and were shown around. One of the boys, Sam, knowledgably said that Rewi Alley’s father had been principal of the school many years ago, and someone had told him he was grumpy! The children were delightfully friendly, and proved to be great ambassadors for Springfield.

Ambassador Wang and his wife have only been in New Zealand a few weeks, but are already loving it here. He is a very nice man; good English, casual and friendly; it’s not difficult to see him quickly fitting in well in New Zealand. They are a delightful couple, and we assured them of the society’s help and support at all times.

The next NZCFS tour to China in the “Explore China” series will be late May-June 2014, visiting the North Eastern provinces of Liaoning, Jilin, and Heilongjiang, as well as Shandong Province. Further details are to come. However, a draft itinerary is now available, indicating the range of experiences to be offered …  Read More…

This is going to be a fabulous tour; give it your serious consideration and be sure to distribute it to anyone you feel could be interested. Our society tours are always exceptional value.

The Nelson branch, with funding from the Simon Deng Li Fund, has recently reprinted the Nelson Provincial Museum’s book on the fascinating story of New Zealand’s first Chinese immigrant, Wong Ah Poo Hoc Ting (Appo Hocton). He arrived in Nelson in 1842. This book is a great read, from his leaving home in Guangdong Province at the age of nine to become a cabin boy, through to his arrival in Nelson in his early 20s, being a farmer and property dealer, marrying twice (both times to European women) and living to be about 100 years old. Have a look at https://nzchinasociety.org.nz/14631/appo-hocton-new-zealands-first-chinese-immigrant/ The books costs $16; well worth it!! The sales form is on the NZCFS website, or contact Nelson president Christine Ward [email protected] or 03 538 0344.

It Certainly Makes You Think……

NZCFS Patron Hon Philip Burdon recently had a very interesting article printed in the NZ Herald. I think it should be necessary reading for all thinking (and for that matter, in particular non-thinking people). As you read it, put yourself in the shoes of the people he writes about.

Here is the link: https://nzchinasociety.org.nz/15201/born-a-kiwi-still-seen-as-a-foreigner/

China Daily – One merry old soul on a Beijing street

The 102-year-old Wang Zhenrong has become an unlikely Internet celebrity and boosted his business making shoe insoles on a Beijing street. His online profile was massively boosted when media reports detailed his work, provoking widespread sympathy and orders for his wares.

The Beijing News reported 300 pairs of insoles sold out for the first time in five years after the media exposure, as people bought up to 30 pairs.

The Beijing News reported 300 pairs of insoles sold out for the first time in five years after the media exposure, as people bought up to 30 pairs.

In 2007, Wang started to make and sell insoles for 3 yuan (48 cents) near Communication University of China. He made four or five pairs each day and sold them on a cart from about 5 pm, until 9:30 pm. His supper is typically just a cold steamed bun, without even a glass of water.

“If I drank water, I would have to find a restroom. But it’s inconvenient to leave my stand,” he told The Beijing News.

His most frequent customers are students who often buy more insoles than they actually need. Some take him out for hot meals and help him out.

“I sell insoles because I want to have something to do and I’m afraid of being lonely. I can also save some cash, so that I don’t have to use my three children’s money in the future,” says Wang, who’s in good health, though he has some difficulties hearing.

He lives with his family members, who are not keen on his small business but have learned to compromise. According to his family, he has sufficient retirement funds.

Students from Communication University of China opened a Sina Weibo micro blog account in March to help Wang promote his business and call on people to take care of him and other elderly people.

When student volunteers paid a visit to Wang’s home on Friday, Wang wrote a note saying: “Thank you for all your concern. I’m very fine.”

He and his family hope their lives won’t be disrupted by his sudden fame. Recently he hasn’t been going out because of the cold weather and all the attention.

“My secret to longevity is that I neither smoke nor drink, and often do something rather than being idle. I also eat a lot, but a little at a time,” he told The Beijing News. 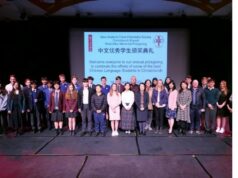