The Willmotts went to China as Canadian Methodist educational missionaries in 1921 and were among the last Protestant missionaries to leave China in March 1952. Those thirty years, from the founding of the Chinese Communist Party to the first land reforms, saw China in turmoil, the Japanese invasion and bombing, civil war and finally the victory of the communist-led forces in 1949.

Last April, Bill Willmott attended the Beijing and Chengdu launch of a book of photographs taken by the Canadian missionaries in Sichuan, including his parents. At our July meeting, he will describe his parents’ life and work in China and the importance of the book, a new Chinese assessment of the missionary effort.

March 2012 was the 20th anniversary of Laurie Gabb joining our branch. “I began reading books on China in my 20s,” Laurie said. He has lived many years at the Salvation Army hostel in Addington and comes by bus to all our meetings. Congratulations, Laurie!

Des Goode now lives with his brother near Albany, Western Australia, on the old family farm that originally belonged to his grandparents. He was also a faithful member, often walking from Phillipstown to our meetings in Riccarton. He sends his good wishes to the branch members. Di Madgin has his contact details.

Each year the society takes a Prominent Persons and Leaders Tour to China. Each branch can nominate a person in each category i.e. prominent person and leader (branch member). We are delighted to announce that Natasha Barnett has been chosen to be a leader on this year’s tour this September. Well done Natasha, you’re in for a great time and we know you’ll do us proud! Our nomination for Prominent Person is yet to be confirmed.

Not to be Missed!

The following two items have been posted on the NZCFS website: (www.nzchinasociety.org.nz) under Rewi Alley Resources, right sidebar on the Rewi Alley Page.

Both of these are superb programmes.

Check this out, unbelievable technology! Maybe we should get these guys to do the Christchurch rebuild!! https://www.youtube.com/embed/GVUsIlwWWM8?rel=0 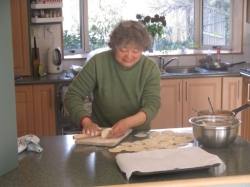 In June, Mme. Ma Baoru, one of our three honorary members in China, visited Christchurch after attending the NZCFS 60th anniversary conference in Auckland. She works for the Hebei Tourist Bureau in Baoding, and has many friends in New Zealand. She has been extremely helpful to New Zealanders wishing to visit Kathleen Hall country, starting with Tom Newnham’s first visit and including the KH Centennial Tour in 1996 and Rae McGregor’s visit that led to a second biography of Kathleen Hall. Recently Ma Baoru has monitored our He Mingqing Scholar Shen Qianqian through her nursing studies and kept in contact since her graduation.

Having visited Christchurch before, the first thing she wanted to do was to see our cathedral, so Diana Madgin took her on a tour. She was dee 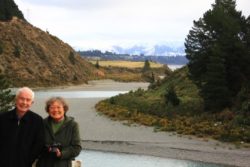 ply saddened by the destruction of so much of our central city and expressed her hope that the cathedral could be repaired. Vivien Qin took her to Avonhead Cemetery, where earthquake victims are buried. Vivien also reports that Mme. Ma is a great story teller, and that her stories about the research on Kathleen Hall which she was involved with are especially fascinating. She is also a good photographer, and told Vivien that one day she will have her own photo exhibition which will exhibit the photos on the people she has met through the NZCFS, the places she has been and/or simply on her everyday living. Who knows, we may see that here one day?

Judy Livingstone took her to the Rewi Alley Memorial Park to see the monument in Springfield, and the branch committee held a pot-luck lunch (at which, going by the attached photo she more than contributed her fair share!!) before she flew to Wellington. 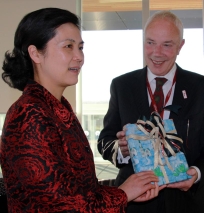 On 1 June we had a brief visit of a delegation of six people from Jiangxi Province, led by Ms. Xie Ru, Vice Governor of the Jiangxi Provincial Government. The visit included a lunch with national president Eric Livingstone and local branch members, followed by an official visit with Mayor Bob Parker. The delegation was here to pursue opportunities of sister city and school links, environmental and horticultural issues, English teachers and Chinese wedding tourists coming to NZ. Following discussions an MOU was signed by both parties.

Over 400 people joined a gala evening at Westburn School hall on the 23rd June to share Chinese traditional culture, Chinese and Maori performances and band together as a community after the earthquakes and to celebrate the 40th anniversary of the establishment of diplomatic relations between NZ and China. 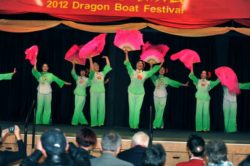 The gala kicked off with energetic Chinese martial arts performances by youngsters aged 4 to 14. Traditional Chinese song, dance and instruments were provided by entertainers aged from 4 to 65 years old. 11 year old Lixin Zhang who has won 15 prizes for various piano performances played “Marphia Blues” and “Hot Potato Rag”. The performance of a Maori Haka, song and dance emphasised the friendship between the two countries. The Maori performers invited some VIPs up to the stage singing New Zealand songs together which provided a real climax to a wonderful evening of fun and fellowship.

Free food, drink and traditional Chinese ZhongZi (rice dumpling) were provided before and after the event, along with spot prizes for lucky attendees. At the stage, prizes and flowers were given to local Chinese entrepreneurs and outstanding young students who won national medals and prizes. The hall was packed to capacity and all in all a great time was had by all.

Following is another delightful poem from Zhang Jichun (Jayson) at the consulate; the consulate’s Poet Laureate!

On the evening 16 June 2012, we were kindly invited by friends to the test match between the All Blacks and the Irish Team at AMI Stadium (Addington). As the first rugby match in Christchurch after the devastating earthquake of 22 February 2011, it attracted over 20,000 people and came out as a big thrill with NZ 22 – Ireland 19.The following poem is my record of the event as a layman in rugby. 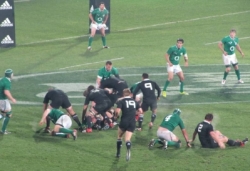 “All Blacks would surely win,

leading by at least eight tries or ten.”

But shortly after it started,

All Black fans were brokenhearted.

The Irish got in the first try

and many predictions proved to be wrong.

All Blacks fought back and forth.

The Irish persistently pushed them down.

The air was filled with anxiety.

The field was full of unpredictability.

What the hell went wrong?

Half time arrived with the Irish still leading

and in protest a nude girl jumped into the field

to where she didn’t belong.

All Black fans’ patience was about to run out

when Carter kicked a drop goal at long last.

So said my friends Jim and John.

and so will it be carried on!”