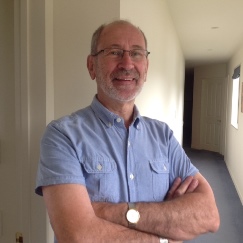 Our speaker this month is branch member Dave Adamson. He will give us a talk on the journey involved in taking the black & white English language soft cover publication of the biography of Rewi Alley by his niece Philippa Reynolds, produced in 1997 to celebrate the centenary of the great man, through to it being published this year in English and Chinese to commemorate the 120th anniversary of his birth. It is in hard cover, with many colour photos and the addition of many new and interesting features. It was quite a journey, and the exciting thing is the most interesting part of the journey is yet to come! In the meantime, have a look at https://nzchinasociety.org.nz/30218/rewi-alley-book-republished-for-the-next-generation-15-may-2017/.

PLEASE NOTE:  Our July meeting will be on the afternoon of Sunday 30th., when we will celebrate the 60th anniversary of our branch’s founding. Be sure to put it in your diary; further details will be advised as they come to hand.

A warm welcome to new members Sarah and Martin Stuart. Sarah’s father Buck Alley is Rewi’s nephew, and Sarah was on the recent Alley Rellies tour of China.

Around 70+ attendees enjoyed what proved to be a great conference. Early on in the planning, the venue booked for it was suddenly unavailable owing to it being closed for earthquake repairs, but fortunately we were able to get the NZ Chinese Association Hall, which proved to be very satisfactory – especially once we had comprehensively decorated it!

At the Friday evening opening, we had a warm welcome from branch president Chris Goodwin, followed with a performance by the junior pupils of the Rewi Alley School. This was followed by a speech by Consul General Jin Zhijian and the conference was then opened by Mayor Lianne Dalziel.

We then had more entertainment by the young people, in fact various entertainments proved to be a delightful ongoing feature of the conference. Drinks and nibbles followed and then it was off for dinner – a Chinese restaurant of course!

Next morning saw the conference proper get under way, with an opening address by our national president Dave Bromwich, followed by presentations from Counsellor Gu Guangzhou, representing the Chinese Embassy and Felix Hao of the Chinese People’s Association for Friendship with Foreign Countries (Youxie). He came to the conference with our good friends Linda and Karen. This was followed by an interesting talk by Eric Livingstone, “Rewi Alley – the Early Years”.

Before we stopped for morning tea, Associate Professor Maurice Alley spoke on Rewi’s educational philosophy in the digital age. This was followed by a talk from Professor Dov Bing on Rewi’s visit to the University of Waikato in the 1970s; very interesting and at times amusing. Tony Tian then gave us an overview of the new Life and Legacy of Rewi Alley website http://www.rewialley.kiwi.nz which is one of the projects the Rewi Alley 120th Anniversary Commemoration Committee Canterbury is working on. This website is now live, and to quote it “This website is designed to provide a quality resource of information about Rewi Alley, his life and achievements, for students, interested New Zealanders and visitors from overseas, specifically for the 120th anniversary of Rewi’s birth in 2017 and to promote commemorations in this year. In order that his life, works and achievements continue to be recognised and studied, material in this resource is presented in a manner that will engage future generations, ensuring his contribution and legacy to both his home country New Zealand and his adopted country China are not forgotten”. Have a look at it; it’s still a work in progress but is certainly going to prove to be a valuable tool in keeping this amazing man’s work and legacy alive and relevant.

After afternoon tea we had a very interesting talk from Elspeth Sandys, a member of the Alley family who was on the family 120th commemoration tour of China in April. A published author, Elspeth is going to write a book on the tour and her interesting relation; that will be a book to read; we will let you know when it becomes available.

Branch member Diana Madgin then gave us a talk on the He Ming Qing scholarship; the history of it, what it has achieved and the challenges it faces. The good news is these challenges are being overcome.

Our national president Dave Bromwich gave a very good presentation on “Rewi’s Spirit: recent, current and future directions”. The main message to be taken from his talk is the major role our society plays in continuing and building on the legacy of Rewi and the challenges that brings.

And of course interspersed throughout the conference was the brilliant playing of the guzheng by Chen Xi Yao of our Hamilton branch!

A copy of the book on Rewi, recently published jointly by the Christchurch China Sister Cities committee and the Rewi Alley 120th Anniversary Commemoration Committee Canterbury was presented to Maurice Alley.

Hon Philip Burdon, who has been our society’s Patron for many years, is resigning from the role this year. He gave us a good talk on his involvement with the society, and where he sees it going in the future. Following his speech, he was presented with a copy of the Rewi Alley book, and thanked warmly for his years of dedication to our society and its activities. That evening a banquet of fine food and fun was enjoyed by all those present.

After the Sunday morning AGM, it was time for a group photo of those present and then it was the end of what had been a very interesting and enjoyable conference.

April 2018, Handicraft Tour: South Island VP Dave Adamson intends leading a craft group tour to China which will involve meeting with many ethnic communities, taking part in craft activities as well as sightseeing too of course. Details out soon.

2018 September/October: The Centre – This allows us to visit areas of China that have been missed out of the last 5 years of the Explore China series. May include Nanjing, Henan (Kaifeng, Luoyang, Shaolin monastery); Anhui (Huangshan or similar mountain reserve); Chongqing-Hubei: three gorges; Hunan (Zhangjiajie, Fenghuang); Guizhou .

2019: The South East – (Fujian, Jiangxi, Zhejiang), possible inclusion of Taiwan, to be determined.

Greater Tibet – a chance to get beyond the normal tourist route – could include Qinghai, and SE of Gansu on the Yellow River, or Sichuan, Chongqing and Yangtze River cruise.

2021: The South West, scope here to explore new areas, but include 2016 tour highlights.

Kumara’s Chinese Miners Memorial Reserve is progressing well with the design planning also completed and the granting of the resource consent. It is envisaged that the tender process, contract/s will be awarded and stage one construction work on site will commence after the spring rains.

The Wellington event has raised the profile of the project, it is definitely of national interest, not just local.  It is acknowledged within the Chinese community as being a very special and significant project.

NZCHCA has hosted three fundraising events for our two projects and it is proposed the next fundraiser will be held in Christchurch in the Spring.

With the assistance of Erin Diao and Steven Ma, both Ross & Kumara projects are currently finalising the order of the key features from China.  This has been a major piece of work.

Work has begun at Ross, with the site contoured and Rock Mountain Features installed and pathways prepared for construction.

We are currently awaiting the Garden Features to be shipped from China. These will be installed on arrival. Trees, plantings and Rock Wall will then be installed, along with the Donors Panel and an Information History Panel within the Gardens. The support from the numerous Chinese Community Groups, the Consulate and donors, has been outstanding. 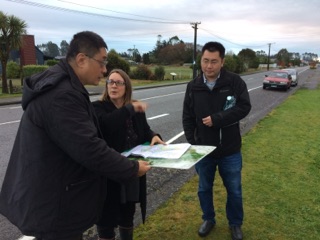 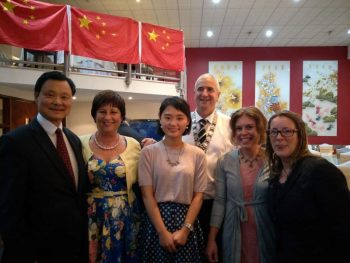 We have wonderful support from Westland Region Environment Network Incorporated Society, Internal Affairs, Westland District Council, Department of Conservation, Department of Corrections and the Ross community, to ensure the success of the Memorial Gardens.

Biddy Manera has met with Deputy Consul General, Mr Chunsen Gong at the Ross site during his travel to the West Coast in May, and they spoke about the Chinese Gold Miners history of Ross and an update on the construction of the Gardens.

The Deputy Consul General has expressed particular interest in that part of New Zealand history. The exchanges between China and New Zealand, especially the South Island dates back to more than one hundred years ago, and the Chinese Gold miners are important contributors to the construction and development of New Zealand at that time. 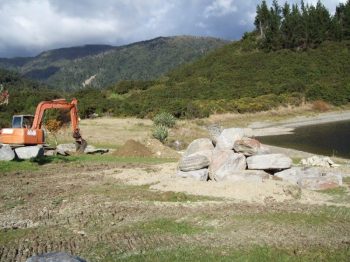 Kirk McDowell, a member of Wellington NZCFS branch, is presently in China studying at a university in Xiamen.  He has been writing about his background and experiences in a blog (abbreviation of weblog).  Find it at https://adventuresinchina23.wordpress.com/ It’s a great read!

We gratefully acknowledge the support of our conference of the following donors: