May speaker: Details of our May speaker will be emailed to you soon.

PLEASE NOTE: the earlybird registration of $110 is extended to 16 May!

It’s not too late to register for this great conference! With no travel or accommodation costs it’s the cheapest one you’ll ever attend! This conference will be a really special one – 2017 is the 120th anniversary of the birth of Rewi Alley, the 90th anniversary of his arrival in China and the 30th anniversary of his death. Let’s make this the biggest one ever!! Come along, enjoy yourself and support your society. Conference information is on the following pages.

The book on his life by his niece Philippa Reynolds, published in 1997 (now republished in Chinese as well as English, with many colour photos) will be on sale at a special Conference Only price of $40; it is normally $45 plus $8 postage; this book will be a Must Have!

Raffle: We will have a raffle at the Saturday evening banquet, so if you have any goodies you would like to donate to use as prizes, please contact Ailsa Dodge 376 4422 or [email protected]

Last year, I went to Beijing in May, an excellent time to go before the heat of summer and the crowds of the tourist season. (I will tell you about that another time).  This year, I decided it was about time to visit China during their New Year celebrations. 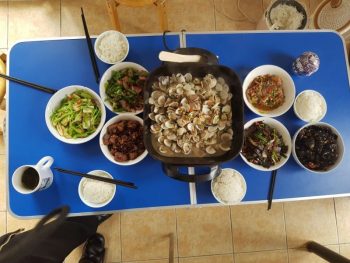 Everyone I spoke to said “Oh, how exciting!” to which my standard reply was “No, no really”. Then I would have to explain that many cities empty out for New Year. Many small shops close up as the workers and others head ‘home’, wherever that might be.

But for all that, there is still a lot going on and many small shops and restaurants still open. And the true reason for my going at New Year, was in the hope of experiencing a real Chinese New Year, which I did!

This year, Chinese New Year fell on Saturday, January 28. I arrived late on Thursday 26th in time for dinner. Home cooked and quite delicious, but not as good as the lunch next day (after sleeping in and missing breakfast). This was after a trip to the supermarket, where I was pleased to notice even in this second tier city (well south of Beijing), that they had Anchor brand milk products stacked on the shelf.

Friends came round, so there were six small dishes on offer, plus a large electric frying pan which had been used to cook some small shellfish. A real feast!

The pork was a local speciality called Làròu, a kind of smoked cured pork, and very delicious! Each dish nicely complemented the others. 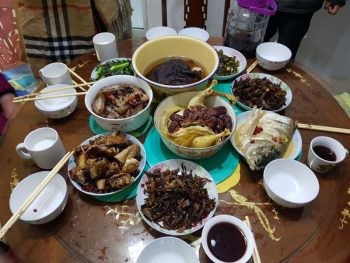 We had dinner that evening with Aunt and Uncle, after visiting Māma. This time eight dishes! Including of course Làròu, but prepared differently, fresh fish head, dry salted fish, vegetables and more. And everything was quite different from food we get here. I felt honoured and spoilt.

About 11:30pm the fireworks started. This is not the big organised displays we think of. Some of you will know that fireworks are readily available in China at any time of the year, and shops specialising in fireworks are easily found. People buy them to set off to announce the opening of a new business, birth of a baby, departure of a deceased soul or for that matter, almost any reason you can think of.

So it comes as no surprise that even in this small village, many people had bought fireworks to set off on New Year’s eve, and they couldn’t wait until midnight! We went downstairs and piled into the car, drove out onto the expressway and stopped at the point where it forked into two roads. Yes, that’s right, we stopped in the middle of the raised expressway! But this being New Year there were very few cars out, and it made an excellent vantage point. The noise and displays are continuous until after midnight and beyond.

The next day we visited a small country shrine where prayers were given for the ancestors. We later visited the family grave where it was cleaned and offerings made, then I was left to have lunch with Māma and Mèimei （younger sister – in Chinese there is no simple word for brother or sister. There are instead two words to represent old o 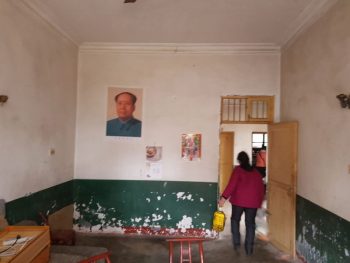 Mama’s house was a good example of early Maoist architecture. Two storey, with an entrance hall (obligatory picture of Mao himself on the wall, near the now equally obligatory Buddhist picture – this one of Guan Yin, the Goddess of mercy). Bedrooms either side, one continues on into the living/dining area with kitchen beyond, and a central open courtyard to the left. At the end of the courtyard was the toilet – so you didn’t have to go outside, but did have to go out to get to it! There were also several store cum workshop rooms no longer in use. I never went upstairs, but figured there were three or four small bedrooms (no longer in use – Mama lives here all on her own!). Bigger than many houses I have seen, and an example to remind us that even in Maoist days, not everyone was seen as equal, so it would seem. There was a brown stripe at the bottom of the walls. Someone told me this was to hide any marks made by muddy boots. The things we learn!

Later the whole family assembled for dinner. This was the 团圆/tuányuán or reunion dinner. 12 dishes to choose from!

Now, another quick word of explanation. I am told that if anyone is missing, it is a New Year dinner. It is only tuányuán if the whole family is present. That is why in China it is so important for everyone to try to get home for new year, or it will spoil the reunion. Confucian philosophy, so prevalent in China still to this day, demands that as filial children, or good parents, we obey the family needs, and this is one of them. To reunite on New Year’s day for a feast to celebrate the year ju 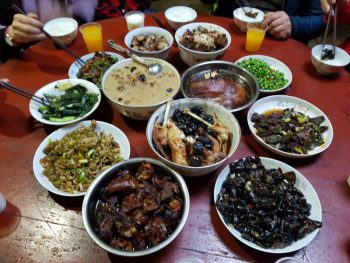 st passed, and hope for the year to come.

One dish very important is the fish. As you may have been told, the word for fish is 鱼yú but the word for surplus is 余 yú . The character is different, but the spoken word is the same! A sort of pun, the fish represents the surplus from last year to carry forward to the new year, and a hope for a surplus in the year to come. Some families will not eat the ‘surplus’ if they have their feast on the New Year’s eve, saving it for the next day’s lunch, but as we had ours on the New Year’s day, there was no such worry!

Oh, and another culture point – if you get a whole fish at a Chinese meal, don’t go turning it over to get the meat on the other side! You wouldn’t want to turn your surplus (profit) into a debit (loss)! You either dig underneath, or wait until the ribs are visible and remove the spine by the tail, shaking the meat off as you go. And please, do eat some of the meat around the head. Your Chinese friends will be amazed and tell you how impressed they are. Some will tell you the head is the best bit of the fish. I don’t know if that’s true, but there is certainly nothing wrong with it!

Sunday was a rest day before we headed off on a three day road trip which was the highlight of this visit for reasons you will find in the next instalment.