We are honoured to have Mme Tan Xiutian, who has been the Consul-General of the Consulate-General of the People’s Republic of China in Christchurch since 2011 as our speaker this month. Prior to her time here, she was Consul-General at the Chinese Consulate-General in Edinburgh for five Years. She has had a varied and interesting diplomatic career, including several postings in China as well as the USA, Australia and the United Kingdom.

In the short time she has been here, she has made a large and

very favourable impression on us all with her sunny and outgoing personality. She will talk to us on her diplomatic career, the New Zealand/China relationship and China’s development. This talk is going to be a highlight for us, so be sure to invite anyone you think could be interested in hearing her talk. We will have a special supper to follow!

We can now confirm that the 2013 national conference being held in Christchurch will be at the University of Canterbury during 24 – 26 May 2013. We are very grateful to the Confucius Insitute for providing at no cost all the venue facilities we require. This is very generous of them, and means we will be able to keep the registration cost as low as possible, so be sure to get it in your diary now! 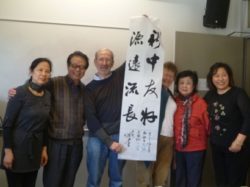 On 2 October, a special guest visited the Chinese Tea House at CIUC and conducted a very impressive demonstration of Chinese calligraphy to the CI Tea House participants. Mr Zhang Defang is a well known calligrapher in China and a member of the Chinese Calligraphers Association (CCA), advisor of the CCA Huangshi Branch and vice president of Huangshi Senior Calligraphy and Painting Institute. He is an expert at various traditional handwriting styles; Kai Shu (regular script), Xing Shu (semi cursive script), and Cao Shu (cursive script). Many of his works have been on exhibition in various galleries in China.

Mr Zhang Defang and his wife were invited to visit New Zealand by the NZCFS Nelson Branch when a Nelson delegation was in Huangshi, a sister city to Nelson, and a neighbouring city to Wuhan, which is a sister city to Christchurch.

During the CI Tea House hour, Mr Zhang Defang wrote two pieces of work after making a brief introduction to Chinese traditional calligraphy. The one for the CIUC is taken from Confucius’ The Analects: “In the application of rites, harmony is to be prized” (礼之用，和为贵). The one for NZAFS has an emphasis on the friendship between New Zealand and China, saying that “the friendship between New Zealand and China has a long history and will last forever” (新中友谊，源远流长). Professor Hong Hu of the CI has kindly offered to take the work for the society to China when she goes in a month or two and have it produced as a scroll, which we will be able to use at functions.

Mr and Mrs Zhang were deeply impressed by the beauty of Christchurch as well as the effect left by the earthquakes. Grateful thanks go to Professor Hong Hu and Ms Jian Chen for hosting them during their brief visit to the city.

This is well worth looking at!!

Go into the NZCFS website www.nzchinasociety.org.nz and have a look at this video clip: http://youtu.be/PW1pOJANHIQ

It was produced by Sylvia Wang of the Auckland branch in 2011 and is in memory of Philippa Reynolds, who died recently.

It is only 11 minutes long and makes fascinating viewing. 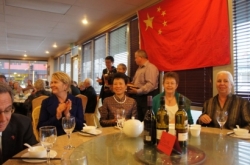 Well, what a wonderful time we had! 123 members and friends sat down to a lovely meal and great fellowship on Sunday 30 September, to celebrate China’s National Day and the Moon Festival. The evening started with musical items by Annelise Posthuma, Luke Bulger and Song Shanshan of the Confucius Institute. Mme Tan Xiutian honoured us with her presence, as did Member of Parliament for Christchurch Central Nicky Wagner and Councillor Glenn Livingstone. As in previous years, the National Day banquet was used as a way of raising money for the He Mingqing Scholarship, and the good news is we raised about $900 for it; well done everyone!

Christchurch has had a strong and ongoing sister city relationship with Gansu Province since 1984. In either January or February 2013, the Gansu Foreign Affairs Office is going to send a young official to the Christchurch Polytechnic Institute of Technology (CPIT) for a period of about six to eight months, with the aim of improving the official’s English and giving him or her the opportunity to get to know us better. This is being done under the auspices of the Christchurch China Sister Cities committee. The committee is looking for kind people willing to home host the young person. Each home hosting period would probably be for a period of about four to eight weeks. A payment to help defray expenses will be made. If you would like to help give this young person a wonderful experience, contact Dave Adamson on 389 1376 or [email protected]

We have two reports on this; Judy Livingstone’s and Natasha Barnett’s. They give different insights, so we decided to include both of them.

Judy Livingstone: The NZ delegation was made up of three delegations – 11 Leaders and Prominent Persons, three Sister City and three Maori Friendship Society; 17 in all. Most of us travelled together to China and& we were able to meet in Auckland before taking off. One of our delegation members, Fay Hobgood from Auckland, had to cancel due to becoming very ill the day before we left and was bitterly disappointed. The NZ’ers all got along well and formed one big group and were respected by all.

Changchun (300 attendees) The Friendship Forum went well with speeches from Eric our leader and Pat Tauroa of the Maori delegation. Eric spoke on Trade and Pat gave a very spirited speech on protecting minorities, finishing with a waiata. Eric was asked to give the vote of thanks for all overseas guests and Pat, Danny and Daniel helped us all give another waiata of thanks. Our Society signed a Memorandum of Understanding with the Jilin Province for Friendship and co-operation. The evening banquet was a great success with the kiwis asked to start the singing to help keep the governor present, and an action song and a haka were taught to all present; the Chinese volunteers responded with Chinese songs.

While in the Jilin Province we visited a huge Halal Muslim meat works; the meat is marketed within China and overseas. We visited a large Mall, kilometres in size, a trade show and a sculpture garden, which has works from all around the world, including three from NZ.

Chengdu (600-700 attendees) The Sister City Forum. Here Bernard Duncan, chair of the Christchurch China Sister Cities committee gave an excellent speech on disasters. Most others who gave speeches on this subject had no idea what a disaster really was like. There were some very good speeches but others that only gave facts about their cities. Hastings & Masterton received their awards for their work with Sister Cities in China.

We visited the Panda Breeders’ Sanctuary and Mt Emei which was covered with mist so there was very little to see through the cloud except a Buddhist temple.

Here the delegation split – most to travel home through Hong Kong. Eric and I and Bernard Duncan flew to Lanzhou. Bernard had a meeting with the Gansu Foreign Affairs Office. Eric and I were there to attend the 70th celebrations of the Bailie Oil School at the Lanzhou City University. We attended this on Friday 21st with many others from NZ; Maurice & Dorothy Alley (Manawatu), Ferry & Aujke van Mansum ( Nelson), Roger Davies and Adam Wei were among the guests, plus Bernard of course. In the afternoon there was a Symposium on the thoughts of Rewi Alley “Hands & Minds Together”

Eric and I also travelled to Shandan by train and back, spending two nights there including one day looking at the developments around the school. Unfortunately we were unable to attend their 70th celebrations held earlier but Ailsa Dodge was there for these. We also visited some co-ops involved in grape and potato growing with Liu Guozhong, our honorary member.

We travelled to Beijing, visiting Youxie for discussions and had a meal with Linda (Wang Lidan) and her husband, a lovely man as you can imagine. We also visited Baoding, Kathleen Hall’s village & Bethune’s Museum, well hosted by our honorary member Ma Baoru, who you will remember from her recent visit to Christchurch. A very busy and informative tour. 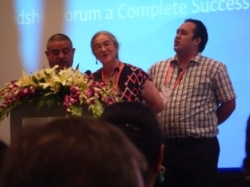 Natasha Barnett: What a wonderful tour it was with our lovely diverse group of people being hosted in an amazing country. I felt so lucky to be with such a wonderful bunch of kiwis, all of whom had different reasons for being on the tour but all embraced the people and culture with great enthusiasm. Eric Livingstone did a sterling job as tour leader. He was relaxed, willing to listen and always had a speech up his sleeve when prompted, sometimes very short notice.

The first city we visited for the Friendship Forum was Changchun, in Jilin Province. The forum itself was well represented by the kiwi delegation by both Erik Livingstone and Pat Tauroa both giving considered heartfelt speeches and a lovely waiata was sung by the Maori delegation (see photo below).

At the end of the forum our Society signed a Memorandum of Understanding with Jilin Province for Friendship & Co-operation.

While in Changchun we visited a Halal meat works, The 8th North East Asia Trade and investment Expo, the Eurasia Shopping Mall and the Changchun World Sculpture Park. The sculpture park was really interesting. According to their brochure they have “439 sculptures made by 395 well-known sculptors from 212 countries around the world”. One of the sculptures on display was called Hinaki (woven eel pot)] which was created artist Samuel Hammera Ludden from Masterton.

From Changchun, Jilin we flew to Chengdu in Sichuan Province, for the two day 2012 China International Friendship Cities Conference. The event attracted 700 representatives from 185 cities around the globe. At the Sister City Conference Bernard Duncan from Christchurch gave an excellent speech on disaster relief in cities, using the recent Christchurch earthquakes as his example. This of course was a very relevant topic given that we were in Sichuan and of course there were more other seismic events in Southern China within that week.

While in Sichuan we were very fortunate to be given a tour to several very well known and important local sites. These were Emei Shan (Mount Emei) Leshan Dafo (The Big Buddha of Leshan) and of course the Chengdu Panda Breeding Sanctuary.

We stopped at Leshan Dafo on our way to Mount Emei and got a boat to cruise in front of the giant statue. The statue is carved into a cliff face and was built in the Tang Period (618 – 907 AD). This is the largest Buddha in the world at 71 metres tall.