There will be no monthly meeting in September as we will have our China National Day Banquet (details below) on Sunday 1 October! Our next monthly branch meeting will be Thursday 26 October.

As usual, proceeds from the banquet will go toward the He Ming Qing Nursing Scholarship programme in China, which for several years has supported a number of nursing students from rural areas in China to complete their nursing training. Many of these students are already making great contributions to rural Chinese communities’ healthcare.

We will once again run our raffle. If you have anything you feel could be used as a prize, please contact Ailsa Dodge 376 4422  [email protected]   Please see the banquet booking details below. Make up a group, come along and have a wonderful evening of food and friendship! Seats are available at $35 Members/Students & tables of 10.

All payments must be made by Friday 29th September.

This exhibition of pictures and photos with captions, displays the development of Shanghai from a small sea-port/fishing village through a major colonial hub and to its present day vibrant multicultural existence. With its history, crafts and culture being covered, there will be something to interest everyone. The opening will include the showing of a 10 minute video on Shanghai. This exhibition has already been seen in Madrid and Brussels.

Our branch is a co-sponsor of this exhibition. Please come along (bring your family and friends) and enjoy what is sure to be a very interesting exhibition.

The event will be presented in the form of a story. It is about a lark, flying from the ancient land of the East, along the one belt one road international route on his discovery tour. When he is flying over the world, he sees the various nationalities using songs, dance, instrumental music ensemble and symphony and other forms, to show the local customs and national characteristics, and finally soars to the other side of the ocean – New Zealand.

The concert combines elements from eastern and western classic and contemporary music. It will be presented by the Christchurch Symphony Orchestra, the Canterbury Conservatory of Music, China Orchestra Chinese traditional music groups and other different national art troupe. What a great evening this is going to be – and it’s free!

I know some of our members have tried to learn Chinese language before and found it too hard, but recently on asking a few questions, I was surprised at just how little people realised they already knew.

For example, when I asked, people would tell me they knew ‘ni hao’ meant hello, but had no idea that it really translates as ‘you good’

No wonder they found the language hard to understand!

But once armed with a little useful information, we can easily build on what we already know.

‘ma’ is a verbal question mark, which converts a statement into a question. This simple technique gets used quite a lot.

With our banquet in mind, I give you the word ‘chi’ (sounds a bit like chur, as in ‘chur, bro’, but without the ‘r’). Chi means to eat. So your neighbour at the table might turn to you and ask “Hao chi ma?” (Do you like it/Is it tasty? But literally “Good eat?”) If you want to sound REALLY authentic, raise the pitch of your voice for the ‘chi’ (not rising, just high and held there for a second)

Practice it at home, and use it at the next banquet/yum cha! 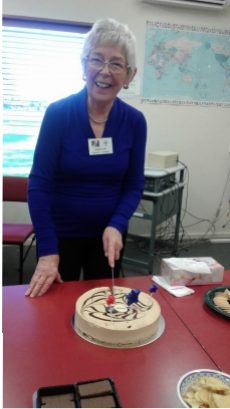 30 July was the 60th anniversary of the founding of our branch. About 40 of us celebrated by having yum cha at Red Bowl, then we went back to the meeting room where we were given a very interesting talk by Helen Bain, one of our earliest members, on the early days of branch activities (and amusing tales about some of the colourful characters of that time!).

This was followed by the ceremonial cutting of the birthday cake by Helen.

Many thanks to Anna Chen for making our birthday cake!! Students gathered at the Rewi Alley Chinese School on a warm Sunday afternoon in August for the annual Dumplings and Spring Rolls Making event. The event was sponsored by our society, as part of a youth project. 43 students who are studying in Christchurch and the wider Canterbury region attended, the majority of them being from China and currently here at high school or tertiary institutions. “Good communication is the key thing to manage the work well with other ambassadors in our team. We started planning this event three weeks ago to make sure everything was well prepared without missing any important messages. Everyone in our team had a task to organize this event, be it managing volunteers, allocating budgets, communicating with registered students etc. It all worked well in the end, everyone is new to this, but these all made the events go through very well, that’s the key!” says Joanne Lee, Christchurch Educated International Student Ambassador. The event consisted of two parts. Students were taught to make dumplings and spring rolls as part of the cultural learning and after that, CEISA organized a game session aimed at connecting the students with each other.

“It’s a very healthy activity for students to involve. Students could have hands on experience to make dumplings, which is a Chinese traditional food. Students from different ethnicity also get to work together. This is a great fellowship for students. Through this event, students could strengthen their friendship, develop a deeper appreciation towards multiculturalism and a deeper appreciation towards food!” says a student parent. At the end of part two, I left you at the ‘wind and rain’ bridges on the river at Tōngdào 通道. Lit up at night they make a truly impressive sight, reflected in the water. We crossed one to find it being used by a group of dancers, as normally happens in parks in China. I resisted the temptation to join in. The next day dawned bright and clear as we headed out to find 坪坦村 Píng tǎn village.

Not being too sure of the way, we stopped to ask at several places. At one, the newly rebuilt wind and rain bridge took us over to a small village where I was fascinated by their tower. Mr Zhong pointed out that the first levels of the roof were four sided, but above that was octagonal. How, you might ask, did they support the extra four corners? Well, the extra four vertical posts are suspended in mid air! (Off the horizontal beams). Absolutely amazing! No nails here – its all wooden mortise and tenon joints like we learnt in woodwork at school. A real feat given the weight it must support. Further into the village, we came across some locals keeping warm in the smoke house while the làròu (see part 1) cured above our heads. Mr Zhong invited himself in, so we all joined them for a while to chat and warm up before heading on, having been told the village we were looking for was further up the road. More fireworks deafened me as we headed back to the car.

Next we came to a larger village with a very ancient wind and rain bridge. We stopped for a quick look and walked part of the bridge. This time, I found two small chapels with gods, one of which I am sure was Taoist in nature. The other I am not sure. Maybe a local deity? Anyway, I made a small donation before we headed out again, just to be safe! After a brief detour (we lost our way!), we arrived at Píng tǎn, a village of ancient wooden two and three storey buildings. Now this was day 3 of the (Chinese) New Year, but it seems celebrations continue for the best part of a week, and of course, they try to make a little money out of it as well, so there was a good mix of locals and ‘tourists’. Well, when I say tourists, it’s not on the main tourist trail, so these were all Hunan people, down from the city, like us, for a few days in the country. No one spoke English!

While they were getting ready, the sound system was blaring out music. Much of it seemed patriotic in nature, with songs about how great was Chairman Mao etc. Entry seemed to be free, but no doubt Mr Zhong had waved his television crew pass at the entrance!

After a while, all was ready. The local god was brought in on a covered sedan chair, and offerings were made by the High Priest, brightly dressed with pheasant feathers in his cap, and cigarette hanging out his mouth! So incongruous.

Then it was paraded around the village to the sounds of instruments (drums and 芦笙 /lú shēng /reed pipes) and more deafening fireworks. Following that there was much singing and dancing, followed by a village banquet, which we were allowed to join in with for a small fee. Food aplenty with variety unbounded.

Quite a few people out of curiosity, asked me where I was from, probably expecting me to say America. On telling them I came from Xīnxīlán New Zealand), their faces would suddenly brighten up and they would praise our lovely country, with thumbs up for emphasis. It seems we are known everywhere.

Towards the end were two special highlights for me. One was a visit to a local house. Mr Zhong had made friends with a local the night before when back in Tōngdào, and we were invited to visit. It was one of those wooden structures, large yet somehow cosy. I could not help but think they must be extremely cold on those winter nights, with nothing lining the timber plank walls.

The other highlight was on return, finding the tourists all gone, but the locals were sitting round drinking rice wine and celebrating a good day. Needless to say, we joined in and, as is common in such situations, toasts were given and received aplenty. Yours truly of course toasted the Friendship and Cooperation between New Zealand and China (in Chinese, of course) to everyone’s delight! I could not have asked for a better result. There was still time left, so we headed out to another village for a show, which I shall tell you about next time.