Monthly meetings of the NZCFS Christchurch Branch are held on the last Thursday of the Month (except January, September, November and December): 7.30 pm at the Rewi Alley Education and Cultural Centre (Wharenui School), 32 Matipo Street, Riccarton.

October speaker: At this stage, speaker details have not been confirmed. We will advise details as soon as possible.

Important notice: As is our usual custom, we will not have a November meeting as this will be replaced by the annual prize giving ceremony on Friday, 25 November, which will be held at St Margaret’s College, 12 Winchester Street, Merivale (further details to come). This is a very important ceremony for these young people, and of course also for their proud parents, siblings, grandparents, teachers etc. Please come along and show your support for these young people at their very special occasion. 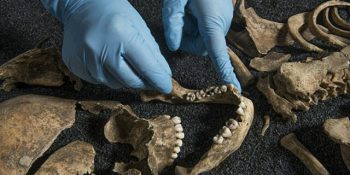 Well, we’ve long since realised the early Chinese seemed to be everywhere, and here’s another fascinating piece of evidence.

A collection of seemingly unremarkable bones discovered in a Roman cemetery in London has provided new insights into the links between the Roman Empire and Imperial China. Analysis has revealed that two skeletons dating from between the 2nd and 4th Century AD unearthed at the site in the city’s Southwark area may have been Chinese.

The findings promise to rewrite the history of the Romans as it suggests these two great empires had far greater connections than previously believed. Have a look at http://nzh.tw/11716170 for further information. Although there were only about 20 items on display, they were enough to have us all quickly fascinated by this window into the life of an amazing man. His diary was there for 1929, and I was able to read of how a man had been killed the day before in a Shanghai factory by a piece of dangerous machinery (Rewi was a factory inspector at the time). After he had discussed it at some length with the factory manager, the manager finally agreed to put a safety device on the machine – but only because he knew it would keep Rewi happy; no thought given to the saving of future lives! That entry was followed by several exclamation marks!

There were three photos albums on display from a collection of over 50. Some had belonged to Rewi, some to his sister Gwen and others from various family members; all fascinating. Other items on display were letters, a school text book and report (??!), a book of poems and various sketches.

Rewi’s presence was with us; you could sense him there, watching us with a bemused look on his face; ‘what’s all the fuss for?”. I think one day we need to make another appointment to revisit our old friend; maybe they will extend the invitation further next time? A week in the life of our President in China

National president Dave Bromwich is in China at the moment. You can read about his varied activities in the full article. At the unveiling in Shandan (Gansu province) of a statue, the first stage in the building of a new Bailie International Vocational College, which will be a provincial level institution, Dave had the honour and privilege of giving a five minute speech.

From there he took the train to Dunhuang, to attend the Silk Road expo. This was a huge and important event, with around 1700 delegates. They were broken up into focus groups. At the one he was in, President Dave spoke on ancient Chinese philosophy and linked it with the philosophy and teaching methods of Rewi Alley. Manawatu branch president Maurice Alley also attended the expo, and spoke on technology innovation and Bailie education.

Bernard Duncan, chair of the Christchurch China Sister Cities committee, was present, and declared President Dave’s speech the best of all those present. It is very gratifying to know our national president is making such an impact and obviously has such mana in China.  Be sure to read the full website article to get the whole story on what he’s been up to on our behalf.

Once again, we had a great night at Red Bowl restaurant in early October for our National Day banquet, with about 110 diners. We were honoured with the presence of Consul-General Mr Jin Zhijian and his lovely wife Madame He Linyun, as well as Christchurch Mayor Lianne Dalziel, Hurunui Mayor Winton Dalley, Councillor Jimmy Chen and Wigram MP Megan Woods.

Diana Madgin gave us a very interesting talk about Kathleen Hall (He MingQing). No matter how many times we hear the story, we always learn something new about this amazing woman. As in other years, the profit from it, over $1100, will go towards the very worthy He MingQing Scholarship. 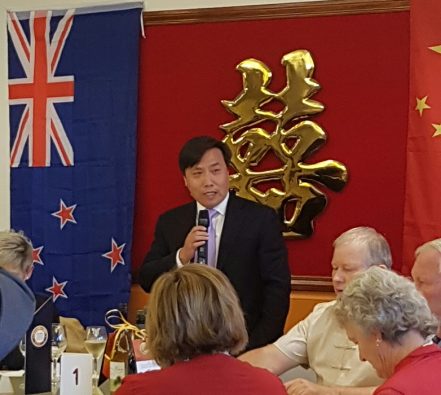 Over ten young branch members recently went along to Cowles Stadium to see the Chinese young women’s basketball team play the NZ young Tall Ferns. Branch member Ross Cao said the games were very intense, and the audiences showed their great support to both teams. In the end, China U19 won both games over NZ Junior Tall Ferns. I think Ross was being tactful when he said he couldn’t remember the score…. He also didn’t actually say which team he was supporting, but it sounds as though it was a great night out for all concerned. Some of you may remember the Rewi Alley Raodshow, which was performed during 1997 as part of the centennial celebrations of the birth of Rewi Alley. Local musician Andy Thompson wrote and performed the music for the roadshow, which told the story of Rewi’s journey from Springfield to China. As part of BECA Heritage Week Christchurch, Andy is giving a concert on Tuesday 18 October, 7.00pm., St Marys Church, Addington (entry off Church Square). One of the numbers he will perform will be From Springfield, which was the major song of the roadshow, and tells the story of Rewi Alley. Entry is by koha, and there will be supper to follow. Be sure to go along and enjoy this talented musician in this lovely old historic church.