As is our usual custom, we will not have a November meeting as this will be replaced by the annual prize giving ceremony on Friday, 28 November, which this year will be held at St Margaret’s College, 12 Winchester Street, Merivale (further details below). This is a very important ceremony for these young people, and of course also for their proud parents, siblings, grandparents, teachers etc. Please come along and show your support for these young people at their very special occasion.

(entry from either Winchester Street or Papanui Road)

Each year our branch presents prizes and certificates to the best students of Chinese in primary, intermediate and high schools, the Polytechnic, community schools and the university.  Students from about 25 schools will be receiving awards this year. This is a joyous event, with students, parents, teachers, and others joining together to honour the students.  It is our society’s way of encouraging the study of Chinese language in Christchurch, so come along and enjoy an exhilarating evening and show your support for these wonderful young people. The Chinese Consulate will be represented by Vice Consul-General Dr CHU Yanli.

Our next branch meeting will be 26 February 2015, which also be our branch Annual General Meeting. More on that in our December newsletter.

Leita Joy. Kevin is principal of Amberley Primary School and went on this year’s prominent

persons and leaders China tour. When the tour finished he linked up with national president

Dave Bromwich and they went to Fengxian, where a sister school MOU was signed with

Shuangshipu Primary School. Rewi Alley founded a Bailie school in Shuangshipu, where he

lived in his famous cave house. He relocated the school to Shandan in 1944 because of the

conscription of young men. Given that Rewi Alley’s father was principal at Amberley, this

For over 66 years the Christchurch Santa Parade has brought joy to the children of Christchurch and its environs. It has a history filled with fun, excitement and fantasy. This year will be no exception. Celebrities, spectacular floats, fantasy, popular characters, clowns, animals, marching girls, thrills, music, music, music and of course Santa will feature in the Parade. It has something for everyone!

This year, our branch will participate together with the Chinese Culture Association. We have organised a truck for this. Friends and family are welcome to participate. Please RSVP to Vivien Qin on e-mail [email protected] or on phone 021500429.

Following is the information which was obtained from the Santa Parade website: http://www.christchurchsantaparade.co.nz/index.html

If the parade is postponed it will be held the following Sunday December 14.  A decision to postpone will not be made before NOON.

In 1957 NZCFS filmmakers Rudall and Ramai Hayward were among the first Westerners to travel widely in the People’s Republic. Their documentary exploring the new China soon after liberation includes a remarkable sequence when Ramai Hayward presents a Maori cloak to Chairman Mao.

With the aid of funding from the Simon Deng Li Fund, National Vice President North Island George Andrews has had the film digitised, adding the story of the cloak’s return to New Zealand and an interview with previous ambassador John McKinnon.

This DVD of a fascinating and historical story will be shown next year at a branch meeting; be sure to watch newsletters for further details.

Suitable for amateur and professional photographers.

To register your interest or for more information please complete the form below.

with Diana Madgin and Bill Willmott

Anyone for Yum Cha?

Activities in the Deep South

Late last year I held a public meeting in Invercargill to sound out the level of interest in forming a Southland branch of our society.  From that has come a small nucleus of people enthusiastic to bring that to reality.  As a further step, over 35 people recently had a great evening of dumpling making in Invercargill. Southern Institute of Technology tutors taught them how to make four different flavours; pork, beef, chicken and vege. It sounds as though everyone had a great time, with lots of fun and laughter. They even got a writeup in the local paper. The outcome from that is a group of about 15 people who plan on having regular activities so that they can get to know each other well, with the longer term aim of forming a branch. Go Southland! 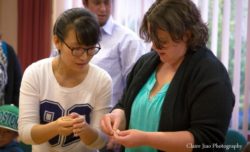 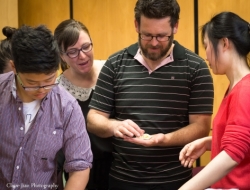 Beijing – China’s largest train maker, CSR Corp Ltd, launched over the weekend its first test train that can reach speeds of up to 500 km an hour.

The six-carriage train with a tapered head is the newest member of the CRH series. It has a maximum drawing power of 22,800 kilowatts, compared with 9,600 kilowatts for the CRH380 trains now in service on the Beijing-Shanghai High-Speed Railway, which hold the world speed record of 300 km per hour.

The gray train, which has testing and data processing equipment on board, was designed and produced by CSR’s Sifang Locomotive & Rolling Stock Co, a subsidiary based in the coastal city of Qingdao in Shandong province.

Ding Sansan, the company’s chief technician, said the concept of the super-speed train design was inspired by the ancient Chinese sword. The bodywork uses plastic material reinforced with carbon fiber.

The Ministry of Railways and the Ministry of Science and Technology approved the overall plan of the high-speed test train in January after it was reviewed by a team organized by the two ministries.

The test train is based on revisions to the CRH 380A – regarding the shape of the front, body, engine and brake systems – intended to increase the speed, promote the engine power and decrease the drag force.

The streamlined shape of the test train’s front and the special design of its rear were expected to decrease drag.

Many high-tech materials, including carbon fiber, magnesium alloy and sound insulation materials, have been used in the train.

Shen Zhiyun, a locomotive expert and academician with both the Chinese academies of sciences and engineering, said the testing of the train will provide useful reference for current high-speed railway operations.