A reception was held on December 19th at Alexandra Park Racecourse, Auckland, to bid farewell to Madame Liao Juhua, the Chinese Consul General, after four years in New Zealand.

Many guests from diverse sectors of the Auckland were invited and many (see list below) spoke of their sadness at Mme. Liao’s departure after a very productive time in New Zealand, where she was responsible for connecting many people together in societies and companies from both New Zealand and China for their mutual benefit.  Whether it was to encourage trade, government relations or youth education opportunities or opportunities for cultural exchanges, she was tireless in her endeavours.

George Andrews, President of NZCFS in Auckland thanked her personally for her help in promoting China/New Zealand relationships, and Mike Lee of the Auckland Council, as well as other key figures in the community, spoke of her help, both official and personal, and others of her help in promoting contacts between the Chinese community in Auckland and China.  They emphasised that she had been extremely busy especially following the signing of the Free Trade Agreement between NZ and China completed during her watch.  It was pointed out that she would often go to two banquets in one day and this was illustrated by a number of rolling images of events that she had attended during her stay.

Many people in both Chinese and Western Auckland circles will sorely miss her.

Click HERE for the text of Mme Liao’s address. 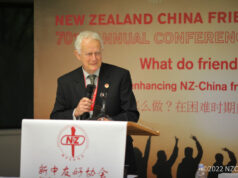 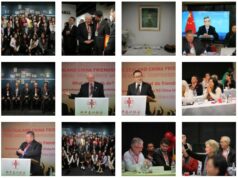 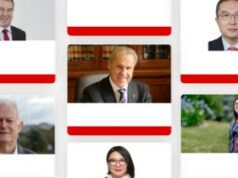