Opening and Demonstration by James Lin

Where: Havelock North Function Centre, Te Mata Road, next to the library 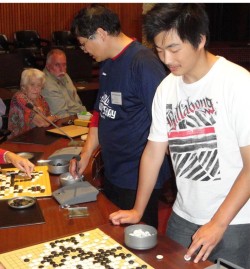 China too strong for NZ in women’s hockey

The first Hawke’s Bay Festival of Hockey was held from 5 to 13 April. At the new Hastings venue the six women’s teams were Argentina (current FIH World ranking 2nd), Australia (4th), NZ Black Sticks (5th), China (7th), Korea (8th) and Japan (9th). Our executive member John Chen was the key volunteer liaison person for the Chinese team and it was a busy week for him. The Chinese team very much appreciated his assistance.

‘New Zealand finished fourth at the six-nation women’s hockey tournament in Hastings, falling 3-2 to China in the bronze medal match on Sunday. Argentina, unbeaten throughout the tournament, won the final against Australia 3-0. The Black Sticks knocked in first-half goals to Petrea Webster and Rose Keddell, but couldn’t hold out the quick and skilful Chinese, who scored in the first minute to put the Kiwis under pressure. Goal scorers for China: Liang Meiyu, Xi Xiayun, Ting Huang.’ (NZ Newswire April 13, 2014, 7:20 pm)

Excerpts from The five reasons why China works

Zhang Weiwei is Director of the Centre for China Development Model Research, Fudan University in Shanghai.   Read the full article at Five Reasons

Is China’s extraordinary rise a model of economic reform without political reform? Is China’s Achilles’ heel its political system? These are questions in many Western minds whenever China is mentioned. But one’s understanding of China could be vastly different if a Chinese perspective were adopted. China’s political governance, adapting itself constantly to new challenges through many minor reforms, has proven crucial for China’s economic success. The following five aspects of China’s political governance merit special attention:
First, one-party governance. In fact, there is nothing new about one-party governance in China: in most of the past two millennia since its first unification in 221 BC, China almost always practiced a kind of one-party rule, or rule by a unified Confucian ruling elite selected through public exams (the Ke ju). In most of the one-party-rule era, China was arguably a better governed country and a more prosperous economy than Europe of the same epoch.

The Communist Party of China has to a great extent followed this tradition and built an impressive system of selecting its leaders based on merit and performance. Key independent surveys over the past decade, show a consistent pattern in which the Chinese central authorities command a high degree of respect and support (above 75 percent) within the country. Depicting China’s polity as being on the verge of collapse, as appears so often in the Western media, is out of touch with China’s reality.
Second, neo-democratic centralism. China’s success is inseparable from its much reformed decision-making process. The old Soviet-style decision-making process was indeed more about centralism than democracy, but China has improved on it and institutionalized a procedural accountability for its democratic centralism. Under such a system, a typical major decision like the nation’s five-year plan for development takes well over a year of extensive and interactive consultations at various levels of the Chinese state and the society, with several cycles of “from the people to the people, and to the people from the people”. As a result, the final decision reflects the broad consensus of Chinese society on many issues such as public health reform, adjustment of the one child policy, deferred retirement age, banking sector reform, education reform and the end of the “reform through labor” system.

Third, demand creation. Cycles of institutionalized consultations and policy debates in major decision-making processes tend to generate, at regular intervals, a lot of public expectations, usually more positive than negative, for economic development. “The fact that China has been able to sustain an annual GDP growth rate of over 9 percent for over three decades is inseparable from these regular and predictable cycles of expectation and demand creation. ”
Fourth, development administration. China has created its own model of development. Chinese universities may eventually offer degrees in development administration just as degrees in public administration are common everywhere.

Fifth, minyi versus minxin. Behind all the above is the Chinese philosophy of governance, including two distinctive concepts: minyi and minxin, the former referring to “public opinion”, and the latter to “the hearts and minds of the people” (approximate English translation), which was first put forward by Mencius (372 – 289 BC). Minyi or public opinion can be fleeting and change overnight, while minxin or “hearts and minds of the people” tends to be stable and lasting, reflecting the whole and long-term interest of a nation. Over the past three decades, even under the occasionally populist pressure of minyi, the Chinese state has still generally practiced “rule by minxin“. This allows China to plan for medium to long terms and even for the next generation, rather than for next 100 days or next election as in many Western countries.

China is still faced with many daunting challenges, but is indeed better off than at any time in its modern history. There is a every reason to believe that China, with a continuously adaptive political system, will become the world’s largest economy in a decade’s time—with all the implications for China itself and for the world at large.

A Year in Tibet is a five part BBC documentary following a year in the life of Gyantse, Tibet’s third largest town. The book of the same name by Chinese filmmaker Sun Shuyun provides a deeper look behind the documentary and includes extra material that is not in the TV series.

Sun became interested in Tibet in the 1980’s but her family put her off going there. She later studied Tibetan at Oxford and began travelling there regularly from 2000 and grabbed the opportunity to stay longer directing the documentary.

The TV series focuses on a number of people in and around the town and explores their different lives, challenges and experiences. They include a hotel owner, a young novice monk, a communist party worker, a poor bicycle rickshaw driver, a village shaman, and their families and colleagues. Increasing development intersects with traditional life and customs; modern life provides the young monk with plenty of distractions while the abbot and his deputy struggle with preparations for a very important visit and then a theft at the monastery; the village Shaman’s role survives but one lucrative aspect is lost to technology, a bride isn’t told of her impending marriage until the last minute, and the taxi driver heads north with his brother and girlfriend seeking construction work with mixed success.

The BBC series was criticised by some for failing to address the issue of Chinese rule in Tibet. The book is more revealing in this regard. It is not ‘the book of the film’, but a deeper look at the lives of the people in the documentary, with the Chinese author providing an insight into the revival of traditional beliefs and ways of life alongside the challenges of modernisation, bureaucracy, poverty, ill health and lack of education, and the tensions between Tibetans and increasing numbers of Chinese migrants.

The TV series, and the book even more so, offer a valuable glimpse into the everyday lives of local people in central Tibet, and both are well worth the time spent.

I recommend watching the TV series first to meet the characters and follow the events in their lives, then reading the book to fill in some of the gaps and deepen your understanding of life in Tibet.

[Matthew Griffiths is a long time member of the NZ China Friendship Society. He loves Chinese food, has visited China many times, and studied Mandarin. He and his Chinese-born wife Deborah have two bi-lingual children. They lived in China from 2008 to 2010. Matthew travelled to central Tibet, including Gyantse, in 2010, and the eastern Tibetan regions of Amdo and Kham (in Qinghai, Gansu, Sichuan and Yunnan provinces) in 2013.]