Go is known as weiqi in Chinese and baduk in Korean, and these two countries dominate the world.

Go is known as Weiqi in China and Baduk in Korea and these two countries are the world leaders.  Come and see  Kim Hyumwoo demonstrate, and learn the basics of the game. 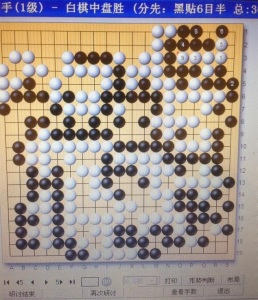 Go is an ancient board game for two players that originated in China more than 2,000 years ago. It is rich in strategy despite relatively simple rules and is played by two players, who alternately place black and white stones on the vacant intersections of a grid of 19×19 lines. The object of the game is to use one’s stones to surround a larger portion of the board than the opponent. Once placed on the board, stones can only be moved if they are captured. When a game concludes, the controlled points (territory) are counted along with captured stones to determine who has more points. By the 3rd Century BC it was already a popular pastime, with a reference to the game in the ‘Analects of Confucius’.

June 7 – Come to our Chinese ‘steamboat’ mid-Winter dinner and see how it is done.

For those of us who have been to Yangshuo, 70 kms south–east of Guilin on the Li Jiang river, the DVD, Yangshuo, the Global Village of China, brought back memories.  Peter and Joyce Marychurch taught in Guilin in from 1995 to 1997 and remember Yangshuo as being far less of a Western tourist mecca than it is now.

Our Branch member Pam Yan grew up in Guilin and told us that her grandparents lived in Yangshuo and her memories are of family gatherings and few foreigners. When she was a child, she recalls that there was no bridge over the river and they had to catch a ferry to get to the other side.

Sally and Mike are just back from a South East China Tour to Guangdong, Fujian and Jiangxi provinces and Shanghai, then Guilin. 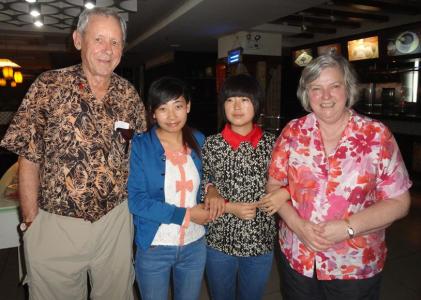 In Nanchang we met the two He Ming Qing scholars from Shandan Bailie School, Wang Xuejun and Zhu Caixia, both 20, who have nearly finished their first year of nursing training.

Sally Russell, in her eleventh year as our Branch President, outlined the activities and achievements for 2010.

The Executive for 2013 is: President: Sally Russell

The selection of promising young woman novelist Huo Yan from Beijing, as the first writer to take up a fellowship at the Michael King Writers’ Centre, has been widely publicized in English language publications in China. This is a great promotion for NZCFS and our most recent initiative to promote mutual cultural understanding.

Our website has nine links to Chinese media reports on this creative new fellowship that NZCFS has funded through the Rewi Alley Friendship and Exchange Fund (RAFE). Go to: https://nzchinasociety.org.nz/13155/huo-yan-selected-as-first-writers-fellow/

NATURE, CULTURE AND HISTORY TOUR:  Another exciting new tour in the highly recommended “Projects” series, led by Dave Bromwich, is being offered this October. It combines a visit to a NZCFS project, where you will meet our project partners and visit rural communities, with a comprehensive itinerary traversing diverse natural, cultural and historical sites. Suitable for reasonably fit people looking for a total China travel experience not normally available, this tour traverses from Yanan, Shaanxi Province, in the North, to Guilin, Guangxi Zhuang Autonomous Region, in the South.

Many books have been written about Tibet, but it is not common for a thriller to be set there. The award winning novel The Skull Mantra is the first in a series that does exactly that.

As well as the unusual location, author Eliot Pattison has created an intriguing central character in the Chinese Inspector Shan Tao Yun. Formerly a fraud investigator in the Ministry of Economy in Beijing, he has been imprisoned in a forced labour camp on the Tibetan plateau for three years where he has befriended his Tibetan fellow captives, many of whom are monks.

The murder of a local Chinese official disturbs the harsh life in the camp.  Shan is asked by the Chinese authorities to conduct an investigation and find the murderer. The tale involves a complex mixture of Chinese officials, Tibetan monks and an American mining company and the intrepid Inspector Shan has to stay true to his conscience and circumvent the Chinese attempts to pressure him into implicating an innocent Tibetan monk in the crime.

The book is more than just a thriller. In the novel Tibet itself is a major character and integral to the novel. The unique landscapes, people, spiritual customs and way of life are woven through the story providing insights into traditional Tibetan culture and aspects of the situation in contemporary Tibet. The author’s own trips to China and extensive research give the novel a rich, detailed and authentic feel. Grappling with unfamiliar Tibetan words I wished there was a glossary to help me and this is something that has been addressed in the later books in the series.

The author notes on his website that he sides with the Tibetan people and the monks in their opposition to the Chinese authorities and this view comes through in the novel. However, he also states his respect for the Chinese people, if not the government, and the book is not all one-sided. The story explores the effects of the situation on the Chinese involved and their various reactions and motivations. Shan’s own story is slowly revealed, including his exile from the system and his appreciation of Tibetan culture as he learns from the monks in the work camp.

The Skull Mantra and others in the series are available from the Hastings and Napier Public Libraries (note that the cover may be different due to different editions). Pattison has also written several other novels with different settings.

[Note: Matthew Griffiths is a long-time member of the New Zealand China Friendship Society. He loves Chinese food, has visited China many times, studied Mandarin, and attempted to learn Tai chi. He and his Chinese-born wife Deborah have two bilingual children and they lived in China from 2008 to 2010 and he still can’t get enough. Editor]