Dr Les Molloy, from Wellington, is a natural heritage consultant with a background in research (DSIR) and in national park and protected area 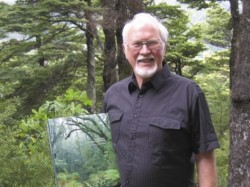 For the past 20 years Les has travelled widely in the mountains, forests and deserts of East and Central Asia.  Much of this travel has been on behalf of UNESCO and the International Union for the Conservation of Nature (IUCN), to evaluate natural areas nominated for World Heritage status.

Murali Kumar, Manager, Community Relations, Ministry of Social Development, Wellington, spoke about the action and commitment required when people have a dream, and commended Hawke’s Bay for all the activities and events undertaken by our Asian communities.

The Hawke’s Bay Branch, NZCFS, received the inaugural award for Best Asian Community Event for organizing the International Cultures Day. This event began in 1999 as an Asian Festival and later changed the focus to all communities. The main supporters continue to be the different Asian community groups and it is a pleasure to work with them.

Nova Lowe Bequest helps bring students from Guilin. A monetary bequest administered by the Hastings District Council, has helped to bring two students from Zhongshan Middle School in Guilin, a sister school to Hastings Girls’ High School, to study at local high schools.  Nova Lowe left $28,380 in her will to ‘assist in the education in New Zealand of students from Guilin.’ Yuting Huang and Kelin Li are the first to arrive in Hastings and their travel costs have been covered by the bequest.

Yuting Huang is spending six weeks at Hastings Girls’ High School and Kelin Li is attending Havelock North High School. Both students are being hosted by families with sons or daughters at the local schools.  Mrs Geraldine Travers, Principal of Hastings Girls’ High, says, ‘We are proud to be able to host a student from Guilin. This is an amazing opportunity for Yuting to immerse herself for a short time in the culture of Girls’ High. We hope that this opportunity makes a real difference as she embarks on the next steps of her life.’

Director of International Students at Havelock High School Jamie Kitchin says, ‘The students will benefit in many different ways from their visit. They will not only learn to live in a society that is very different from the one they experience every day in Guilin but they will also have the opportunity to improve their grasp of the English language.’

Hastings and Guilin have had a Sister—City relationship since 1981, the first and oldest between China and New Zealand.  Mrs Travers visited Guilin and Zhongshan Middle School in October 2012 to finalise the exchange agreement.

Nova Elizabeth Lowe was a member of the Hawkes’ Bay Branch of the New Zealand China Friendship Society and died on 6 January 2005.  She visited China on a trip organised by former Branch President Fred Chu in 1995.  It is anticipated that Yuting Huang and Kelin Li will be the first of a number of students to travel from Guilin to experience the New Zealand education system in their sister city.  Two students from Hastings are to travel to Guilin later in the year to complete the exchange. ork in the booming coastal cities. In the novel, teenage girl Xiaohong leaves her village in rural Hunan and travels to Shenzhen to escape family problems and the restrictions of village life, and to seek her fortune accompanied by her friend Sijiang. The book follows their story as they become ‘northern girls’, meaning those who come from anywhere north of Guangdong province.

Initially setting out to be hair salon shampoo girls, Xiaohong and Sijiang try their hand at a range of jobs as circumstances and opportunities arise. The adventures, difficulties and dangers of the big city become apparent from the outset and only compound over time. Help and friendship from other young women like themselves, and occasional strangers, makes life more bearable. The problems of obtaining temporary permits, being a second class citizen and even language differences, along with conflicts about where one’s home really is, make the journey a struggle, through which they show great determination and strength.  Education is seen as a way to improve one’s position in life but luck also seems to have a major role.

Northern Girls is a little disjointed in parts as one dramatic episode flips into the next, sometimes without any link. Perhaps life as migrant seems a little like that, with best laid plans being suddenly upturned and events pushing the participants on new and unexpected paths. Sheng introduces a diverse range of characters as the story progresses, while at times the plot becomes almost surreal.

The sexual content of the novel is a strong theme that carries through from start to finish. Given that such matters rarely reach the pages of the China Daily or other mainstream media, except in official scandals, it is perhaps the role of a novel to expose and explore an aspect of life that otherwise stays behind closed doors.  Xiaohong’s exploits, and those she encounters along the way, examine issues of sexual freedom, the position of women in society, love, power, money, crime and corruption, and the Chinese family planning system.

The struggles and challenges of migrant workers in China is a story only beginning to be told.  Northern Girls adds to that. Sheng Keyi based the novel on real stories and people as well as her own experience. As an insight into an aspect of life in modern China, the book is a valuable and entertaining contribution.

Northern Girls is available from the Hastings and Napier Public Libraries.

[Matthew Griffiths is a long time member of the NZ China Friendship Society.  He loves Chinese food, has visited China many times, studied Mandarin, and attempted to learn Tai chi.  He and his Chinese-born wife Deborah have two bilingual children. They lived in China from 2008 to 2010 and Matthew finds modern Chinese fiction an interesting insight into life in China.]