(Please note that the date is 6th September, as there is no Branch monthly meeting in August)

Dr Les Molloy, from Wellington, is a natural heritage consultant with a background in research (DSIR) and in national park and protected area identification and management (DOC).

For the past 20 years Les has travelled widely in the mountains, forests and deserts of East and Central Asia.  Much of this travel has been on behalf of UNESCO and the International Union for the Conservation of Nature (IUCN), to evaluate natural areas nominated for World Heritage status.

Two complementary documentaries were enjoyed by our members at the June Branch meeting.  Inside Red China, made in 1957 by NZCFS members and filmakers Rudall and Ramai Hayward, showed a society eager to reform after years of war and upheaval. Rudall and Ramai were the first English speaking filmakers allowed into new China and they showed many aspects of Chinese life at that time.  The film ends with the question: ‘What will China be like in 50 years time?”

After some discussion we screened New China in Her First 60 years (2009) to provide answers to that question.  Interestingly both films explored similar topics such as religion, industrialization and construction.  In 1957 a major achievement was a bridge over the Yangtze at Wuhan and in 2009, sending Chinese astronauts into space.

Hawke’s Bay Branch will hold the 2014 NZCFS National Conference and AGM. Planning has started and a major focus will be on youth involvement. Already the Hawke’s Bay Youth Orchestra has agreed to play both Chinese and Western music for us.  We will need all of our members to help make this another great conference. Support the Multicultural Association and book your tickets for the awards dinner.

Peter Chin, a former mayor of Dunedin, spoke at a Confucius Institute Forum at the University of Canterbury on “The Importance of Sister Cities in China for New Zealand: Dunedin-Shanghai Sister – Cityhood as an Example”, in the afternoon before the NZCFS conference started. He spoke about the following: 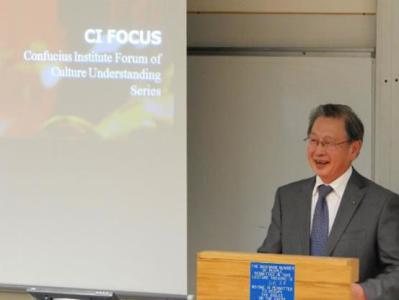 ‘Guanxi is not an easy concept for New Zealanders to understand and develop. My Googled simple explanation is – “Guanxi is a general Chinese term used to describe relationships that may result in exchanges of favours or connections that are beneficial for the parties involved – a networking with an element of personal and mutual trust. It is a personal connection between two people in which one is able to prevail upon another to perform a favour or service or be prevailed upon.  Reciprocity is an essential element.

I suppose the European phenomenon, transplanted to NZ, which is somewhat akin to but far less complex than guanxi is – the old boy network. I’ve spent all my life living in Dunedin. I went to school there – at Otago Boys’ High School, one of those conventional, single sex schools devoted to the four Rs – reading writing arithmetic and – rugby!

After modest success at the first three and none whatsoever at the fourth, I went to NZ’s oldest University, Otago, to study law before beginning a 50 year career in legal practice and in later years dabbling in local politics on the side’

‘Over that time there would not have been a person of influence in the city with whom I hadn’t rubbed shoulders somewhere along the line. If I didn’t know who to call when I needed help and advice there was always somebody I went to school or university with or whom I knew who would, and boy does that make life easier. This was the Dunedin equivalent of the Old Boy Network sometimes called the “Tartan Mafia”.

Well – doing business in China is very much like that – only more so!  It’s not what you know that will help forge useful business ties but who that will get you to the front of the queue.’

What is the Benefit of Having a Sister City Relationship with China?

‘There is a high level of trust on both sides and this mutual friendship is poised to translate into an expansion of trade, economic and cultural links across the board.” Mayor Yang said “that of all Shanghai’s Sister—City relationships, Dunedin is one of those with a special place in Shanghai’s affections.”  Significantly he went on to accept an invitation by (current) Mayor Cull to visit Dunedin during his five year term of office.

If this visit eventuates it will indeed be a very high level occasion in which New Zealand Government would also have a significant role to play as the office of the Mayor of Shanghai has often been the stepping stone for the incumbent to attain even higher office’.

‘But at the end of the day I’m left wondering if there is any meaningful system for assessing the value of our sister city relationship and who gets to decide what those boxes represent and who decides what gets a tick and what does not. Let’s face it – when was the last time any of us carried out a cost benefit analysis on our sister – or any other member of the family for that matter!

Can, or should, any friendship be the subject of such impersonal financial scrutiny. Do any of us look at our friends or relations and ask ‘Am I getting value for money out of him or her?’ I acknowledge that using ratepayer’s money changes the nature of our relationships – but I’m uncomfortable that this should be the yardstick by which such agreements are progressed.’

For the full speech by Peter Chin go to:

News from the Internet

The Women’s Forum operates a publication series in conjunction with Routledge.  The Women in Asia series aims to explore the central role women play in creating the new Asia and re-creating Asian womanhood. It seeks to encourage a productive conversation between scholars in women’s studies and Asian studies. The contributions of women to the social, political and economic transformations occurring in the Asian region are legion. Women have served as leaders of nations, communities, workplaces, activist groups and families. Asian women have joined with others to participate in fomenting change at the micro and macro levels. They have been both agents and targets of national and international interventions in social policy at the level of the household and family. In the performance of these myriad roles women have forged new and modern gendered identities that are recognisably global and local. Their life experiences are rich, diverse and instructive. 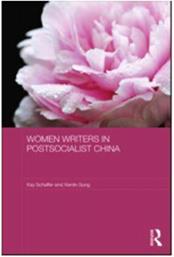 By Kay Schaffer and Xianlin Song.

In recent years there has been phenomenal growth in women’s writing in China. This book examines how that growth has transformed women’s lives.  The book focuses on four genres of women’s writing—life narratives and autobiographical fiction, popular literature, historical biographies and oral narratives—emerging out of the flow of ideas between Western and indigenous Chinese feminisms. This critical study of selected genres and writers highlights the shifts in feminist perspectives within the contemporary local and global cultural landscape.