Come and play and learn more about Go

The game of Go or Weiqi is an ancient board game for two players that originated in China 3,000 years ago. It is rich in strategy despite relatively simple rules and is played by two players, who alternately place black and white stones on the vacant intersections of a grid of 19×19 lines. The object of the game is to use one’s stones to surround a larger portion of the board than the opponent.

An excellent 20 min DVD The Game of Go looks at traditional refined culture where guqin, go, calligraphy and painting embody the essence of traditional philosophy and art.

Come prepared and look at this Go website to learn more about the game. 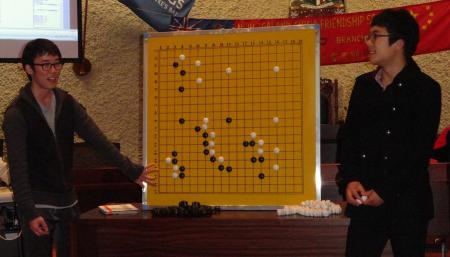 The theme is  “Voices for Youth”.  Xi Yao, a young traditional Gu-Zheng musician with the Traditional Chinese Music School in Hamilton, has composed a musical work to be transcribed by the Hawke’s Bay Youth Orchestra for western instruments and performed as a feature of our Conference concert.

A number of young people will speak about their thoughts and experiences including Hawke’s Bay high school exchange students recently returned from Hastings’ Sister-City schools in Guilin and other young adults from various Branches.

The meeting began with the Branch AGM and then an excellent DVD The Yellow River Civilization, which introduced the rich history and culture of the region.

Several years ago NZCFS member Nova Lowe gave a bequest to the Hastings District Council to bring Guilin high school students to Hastingsto study. The first two students came last winter and over the January period Kevin Gee from Havelock North High School and Hannah Kupa-Elliot from Hastings Girls High School made a return exchange. They attended school in Guilin, lived with the family of the students who came here and enjoyed Spring Festival.  Kevin spoke of his  exchange and was open and thoughtful about his experiences.

Sally Russell, in her twelfth year as our Branch President, outlined the activities and achievements for 2010.  Please look at her report via HB President’s Report 2013

Horse of the Year (HOY)

Exclusive to Te Papa, Throne of Emperors and Shi Lu: A revolution in paint immerse you in the ancient and recent history of China. In these two stunning exhibitions from the National Museum of China, see imperial treasures from two millennia of Chinese civilisation and the revolutionary art of a modern master from China’s turbulent 20th century.

Throne of Emperors:  Imperial China lasted over 2,000 years – far longer than the Roman or British empires. Over that period, many powerful emperors reigned: some visionary, some militaristic, some harsh, and some refined. Throne of Emperors explores the lives of seven of the most important who, through their unique personalities and talents, left their mark on China and the world.

From the reign of Qin, First Emperor, (250–210BCE) to the overthrow of the last emperor in 1911, these leaders held sway over China’s vast, growing, and multi-ethnic society. They ruled over cycles of change – political, religious and social – and over dramatic periods of unification, exploration, trade and innovation. These Sons of Heaven – as the emperors were called – were major shapers of history, well aware of the social responsibility they carried. Through a selection of artefacts rarely seen outside the National Museum of China, Throne of Emperors traces these cycles of unity and in-fighting, stability and change, harmony and rebellion of the empire.

First Emperor Qin was one of many leaders whose rule was marked by military might. The emperors of the Tang dynasty oversaw the movement of trade, people and ideas between the east and the west, along the bustling Silk Road, where camels carried the goods of Chinese and foreign traders alike.

Genghis Khan and his descendants from Mongolia conquered first China, then vast territories of Asia and Eastern Europe, in a series of brilliant but brutal military campaigns. China became the largest land empire ever to exist.

The cultured Qianlong Emperor (1711–1799) was a great military strategist and patron of the arts. But corruption and conflict in the later years of his rule sowed the seeds that would result in the end of imperial China.

The last Chinese emperor abdicated in 1911, leading to a period of change.

China’s story continues in the associated art exhibition Shi Lu: A revolution in paint, where the chosen names of artist Shi (tradition) Lu (modernity) capture China’s challenge of reconciling its past and present.

Shi Lu (1919–82) was a modern master of Chinese painting and calligraphy, who maintained his unique artistic vision during a time of political and cultural revolution. ‘One of my hands stretches into tradition,’ he wrote, ‘the other stretches into life.’

The next NZCFS tour to China in the “Explore China” series is scheduled to take part from May 28 to June 20 2014. It visits selected sites in the North Eastern provinces of Liaoning, Jilin, and Heilongjiang, as well as Shandong province.

For the itinerary go to: Explore-China-the-Northeast-2014

I am now retired from my academic job in the Pharmacy School of the University of Otago and am currently the President of the Dunedin Branch of the NZCFS. I have had a long association with things Chinese through being married to a Kiwi Chinese for the last 42 years and, more importantly, have visited China’s North East on numerous occasions since 2000 through working with a colleague and friend at Jilin University in Changchun.   (visit Changchun on this tour)