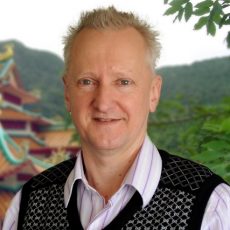 Heiko Lade first became introduced to the NZCFS when he saw their stall at the International Cultural Day in Hawkes Bay which the local branch has been organizing for over 10 years. He then went onto become a member and has spoken at branch meetings on acupuncture and his visits to China. After joining the Hawkes Bay executive in 2010, he was then appointed to be the National Secretary of the NZCFS at the May 2011 AGM which he held until May 2016. His interest in China stems back to his childhood when he first became intrigued about Sydney’s Chinatown.

He practiced kung fu and tai chi in Sydney’s Chinatown and then went onto study acupuncture when he left school. In 1984 he lived in Hangzhou, where he worked as an intern at the Red Cross Traditional Chinese Medicine Hospital. This was quite pivotal for the time as Heiko was a member of one the first foreign student groups ever allowed into China to study acupuncture in a Chinese teaching institution after the founding of the People’s Republic of China. His travels to China have included Hong Kong, Shenzhen, Guangzhou, Hangzhou, Guilin and Shanghai. In 2011 he was also part of the New Zealand Prominent Persons and Leaders Delegation that travelled to Beijing, Shandong and Fujian at the invitation of the Chinese government.

Heiko has a master’s degree in Traditional Chinese Medicine from the University of Technology, Sydney and been in private practice for over 30 years. In New Zealand he has lectured in acupuncture and Chinese herbs and has also acted as an assessor for the New Zealand Qualifications Authority. He has assessed many of the Chinese trained practitioners who have now become accredited ACC acupuncture treatment providers.

Heiko is also past president of the New Zealand Register of Acupuncturists Inc and currently practices from The Acupuncture Clinic in Hastings. Heiko is married to Irene who comes from Guangzhou and they have a 15-year-old daughter Nesta, who is learning Mandarin via correspondence while attending Havelock North High School.

In 2014 Heiko instigated the inaugural fund raising concert for the Hawke’s Bay Youth Orchestra as part of the NZCFS annual conference. This culminated with 26 members of the youth orchestra aged between 11 and 17 to visit and perform in Guilin and Shanghai in April 2016. It was the largest delegation ever to visit Guilin. Heiko is currently a National Executive member and is on a number of their sub committees.