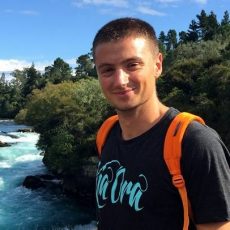 Kirk McDowall first joined the NZCFS in 2014 after spending six months volunteering in Guangzhou and Shanghai. It was during this time he strengthen his passion to learn Mandarin, and upon returning to New Zealand, began learning Mandarin part-time and became actively involved in the NZCFS Wellington Branch. He has been responsible for coordinating youth events, editing the branch newsletter and became the local Treasurer in 2016. He was also appointed to the National Executive in 2016, and is one of the National Youth Coordinators for the Society.

Kirk has a passion in international development and environmental issues, and graduated with a Masters in Development Studies in 2014. He has a strong interest in Asia, having travelled extensively throughout the region, living in Singapore and spending time volunteering in Indonesia for a HIV/AIDS community organisation. His volunteer work in Mainland China involved giving environmental focused presentations to local high schools, with an emphasis on practicing English with students.

He currently works at the Environmental Protection Authority in Wellington, and is on the Leaders Network of the Asia New Zealand Foundation.