The letter is in two versions, English and Chinese.

The text of each is below:

I was deeply saddened at the passing of David Feickert.  Words fail to express the sorrow we share.  On behalf of the State Administration of Work Safety, P.R. China and in my own name, I would like to express my heartfelt condolences to the family and friends of David Feickert.

David Feickert is an old friend of ours.  He was a man with a noble spirit.  He loves China, regarding China as his second homeland.  David Feickert used to contribute to China’s work safety efforts by giving valuable advice to the international co-operation between China and other countries and promoting the understanding of China’s safety policies by introducing it to international communities.  He was considered as a warrior waving China’s national flag in the EU.

He had visited China for numerous times, visiting enterprises, attending conferences, seminars and training classes.  During which, he introduced advanced concepts, experience and techniques from abroad to China.  In 2009, Dave Feickert was conferred with “Friendship Award” by the Chinese government in recognition of his efforts and contribution to China’s work safety improvement.

May he rest in peace! 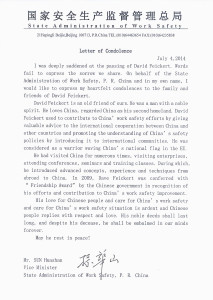 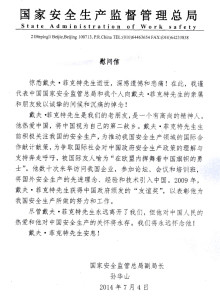