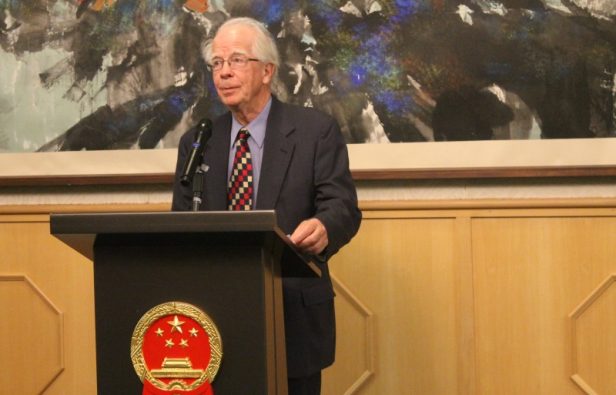 I would like to thank you for inviting the NZ China Friendship Society, whom I’m representing this evening, to participate.

I will start by quoting the words of two Presidents of China.

A little more than a quarter century ago, I presented my credentials as New Zealand Ambassador to China to the then President, General Yang Shangkun. At the outset I made a little speech (approved by Wellington, of course). Then President Yang Shangkun spoke. His opening comment, indeed the subject he wanted to dwell on, was his personal friendship with and respect for Rewi Alley. Clearly when he thought about New Zealand what came into his mind was his affection for Rewi Alley.

If we fast forward a little more than a quarter of a century to earlier this month, President Xi Jinping is reported talking to the China Gong He International Committee in Beijing. He praised Rewi Alley as a distinguished New Zealand friend of China. He said that he hoped everyone would take inspiration from Rewi’s mantra of working hard and working together.

Today we are all aware of the economic relationship between New Zealand and China. Of course it is critically, irreplaceably, valuable to New Zealand.  And we believe it is valuable to China, too.

But no matter how valuable it is, no economic relationship can stand alone.

People speak about the importance of shared values to successful relationships. New Zealanders and Chinese do share many human values. Equally important, New Zealand as a nation is based on reconciliation, accommodation and respect between two peoples from very different backgrounds. I agree strongly with those who suggest this should be a driving force in our international relationships, particularly in the Asia Pacfic.

A Chinese saying says: “If people are of one heart, even the yellow earth can become gold.” (三人一条心,黄土变成金)

New Zealand has demonstrated that it can be a good friend – the list of “firsts” in the relationship is getting longer. A recent addition to the list has been cooperation together on development in the Pacific region: a clear signal that New Zealand welcomes China’s involvement.

Of course, good friends don’t always agree with each other. New Zealand values strongly its sense of independence. But a friendship built on strong foundations will support a robust economic and wider relationship.

Rewi Alley’s legacy, especially, and the respect and affection accorded it by both China and NZ are at the root of the friendship our two countries have developed.