As the year comes to an end, it is time to reflect on what has been achieved, and what opportunities lie ahead. Firstly I would like to thank Eric Livingstone for his leadership of five years to the AGM in May this year. He has consolidated the foundation of our Society for the coming years.

With increasing engagement between New Zealand and China across all sectors, we need to consider our position in this relationship and the role we can play in the future.  Our new project funds have given us exciting opportunities for significant activity, and I extend our ongoing and deep-felt gratitude to our funders, China Youxie, and Honorary Patron Simon Deng Li.

The project funds serve multiple purposes, not the least in achieving NZCFS’s role of promoting understanding between NZ and China.  In the past year, these funds have allowed the publication of two books of historical interest; the initiation of a writer’s fellowship with the publication in China of a novella by Huo Yan, our first Michael King Writers Centre (MKWC) fellow; and the travel to China of a delegation of New Zealand journalists. The MKWC fellowship is leading to future exchanges between the MKWC, NZCFS and the Shanghai Writers’ Association. The media delegation gave high profile journalists open access to China, acknowledging  NZCFS’ role , and increasing our public profile.  All branches are encouraged to apply to the two funds for their projects.

In our project work, three applications are continuing our programme of rural development – two extend  the  development of  cooperatives, and an exciting new project targets an enhanced opportunity for rural children through better access to English language learning.

Perhaps our most important focus for the future is to engage youth. The Youth Friendship Internship and Ambassador’s projects and the Footsteps of Rewi Alley Youth Delegation are playing a significant role in increasing NZCFS’ exposure to young New Zealanders. The future success of attracting young people requires that NZCFS continues to facilitate specific activity for youth.  Our theme for next year’s National Conference in May is “Voices for Youth” and the Prominent Persons’ and Leaders’ delegation will have a youth focus.

NZCFS’ objectives continue to fit well into the rapidly expanding New Zealand-China relationship, and we have a significant role to play, working in harmony with other organisations and institutions.  At the latest National Executive meeting on November 23rd, the Executive established a  Strategic Initiatives Group under the chairmanship of Michael Powles, to look more deeply at  NZCFS’ future  role.

Our next tour “Explore China – the North East” will take place in late May/early June 2014 Keep your eye on the website for further updates.

I would like to thank all those who have contributed their time to continue our proud record of being a most active conduit to promote friendship and understanding between the people of New Zealand and China.  May you all have an enjoyable and restful break, and feel refreshed and positive for NZCFS’ 62nd year ahead. 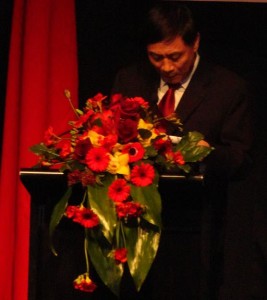 Ambassador Xu Jianguo completed a successful term in New Zealand in October this year. The main focus of his work was to consolidate the benefits of the FTA agreement between New Zealand and China.  During his time, the level of trade increased  significantly and the NZ-China relationship continued to develop.  The number of Chinese tourists visiting New Zealand is now expanding exponentially, and there are many young Chinese coming to New Zealand under the working visa scheme.

Ambassador Xu was a supportive friend of NZCFS, with occasions of social engagement and meetings with our executive members. Wellington and Hawke’s Bay Branch Presidents, Michael Powles and Sally Russell, represented NZCFS at his farewell function on 26 September.  Best wishes to Mr Xu and his wife, Madam Ni Li. 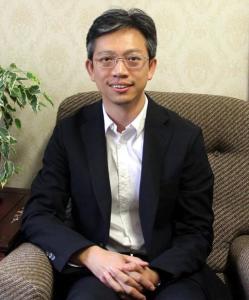 Ambassador Wang Lutong, born in September 1969, comes to New Zealand from a distinguished career in the Chinese Ministry of Foreign Affairs.  He held the position of Counsel, Office of Foreign Affairs Leading Group, CPC Central Committee, Beijing, from 2011 until his current appointment.  Previously he served as a Third Secretary for the Chinese Embassy in the United Kingdom from 1996-2000.  For Ambassador Wang’s CV please visit http://www.chinaembassy.org.nz/eng/sgxx/t1092017.htm

A Reception was held for Ambassador Wang at the Embassy in mid- November, one month after assuming his role as Ambassador.  It was attended by a number of politicians,  community and business leaders, and NZCFS representatives Dave Bromwich, Michael Powles, Bernie Richmond and Christine Strickland.

He noted the directives coming from the recent Conference on the Diplomatic Work with Neighboring Countries that, China needs to develop closer ties, more friendly political relations, stronger economic bonds, deeper security cooperation and closer people-to-people contacts with neighboring countries and to enable them to benefit more from China’s development and prosperity.

After my arrival, I realized I had come at an interesting and important time, as the relationship is at its best ever and still has great potential. I am deeply impressed by your enthusiasm and commitment, which are the sound foundation of our relations and which inspire me to think smarter and bigger.

I’m here to listen what you have in mind, to offer what I can possibly give, and to meet what you are in need. I myself and Chinese Embassy are more than willing to serve as a window and a bridge, through which, to promote further understanding, exchanges and cooperation and provide my humble service to the growing Chinese community.

NZCFS welcomes Ambassador Wang, and we look forward to working closely with him and the Embassy to contribute to the challenge given to think smarter and bigger.

Nelson Branch, with the assistance of the Simon Deng Fund, has reprintedNelson Provincial Museum’s publication of the story of Appo Hocton –Wong Ah Poo Hoc Ting by Karen Stade, and distributed it nationwide.   Appo Hocton, arrived in Nelson in 1842, within months of its settlement The books are available for purchase by for $16 each. Go to the story of Appo Hocton.

The next NZCFS tour is in the ‘Explore China’ series, this time the Northeast, and is planned for late May and early June 2014.  Shandong is famous for Mount Taishan, one of the five Sacred Mountains, Qufu is the hometown of Confucius and Jinan, the capital is known for its natural fresh water springs.  The trip will then visit all of the three provinces of the Northeast: Liaoning, Jilin, and Heilongjiang.

A new area for NZCFS tours, this will be a journey of discovery and understanding of the relationship of the North East to China’s history and economy. It is a region of severe climate and strong history and culture, with  important social impact on China today.

For further information and updates, go to the tour’s page 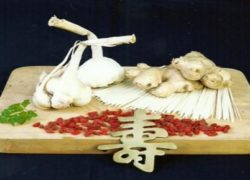 This book contains over 140 recipes and 15 Chinese women’s life stories. Home cooking through the generations since Chinese Women Settled in New Zealand over the last 100 years.

Kuan Meng Goh (ONZM, JP, PhD, FRSNZ), Emeritus Professor, Lincoln University; Canterbury Branch President and Past National President, New Zealand Chinese Association  “It is widely known that few other cultures are as food oriented as the Chinese. Traditionally, in Chinese culture, there is always an important relationship between food and health. This book adds a new dimension to the relationship by linking the experiences of Chinese grandmothers to their recipes. The recipes as presented are not only home-proven to succeed but are also authentic and achievable. Most people enjoy Chinese food and the recipes provide the opportunity to cook these delicious dishes.”

“This is a beautiful, well presented and illustrated Chinese cook book which is informative combined with family stories. It brings back fond memories of childhood days and the foods that our mothers and grandmothers cooked for us.”