a celebration of the NZCFS Photography Tour

with June and Bryce Wild

The full pdf of this newsletter is available at: NZCFSNelsonJuly2012.pdf 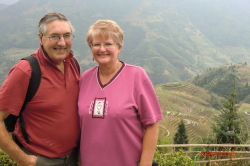 This year, for the first time, NZCFS organised a tour especially for photographers. Fortunately for Nelson Branch, June and Bryce Wild joined this tour in April and they have made an exciting selection from their large collection of photographs for a ‘show and tell’ at our July meeting.

The photos here were obviously taken by other members of the tour party, but they indicate how the Wilds enjoyed their ‘wanderings’, including cycling, hiking, and the odd unexpected adventure which they will enthusiastically share with us. 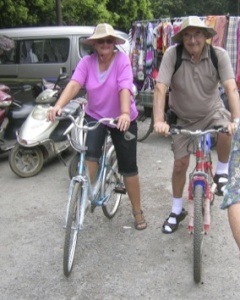 As usual, we will begin with a brief general meeting at 5.30 p.m. and then enjoy our meal from the Golden Bell, including vegetarian options, at 6 p.m., costing $12. Our speakers will begin about 7 p.m.

Friends and visitors are most welcome but please notify June when you ring so that we have accurate numbers for the meal.

June will be taking the phone messages this time as Barbara will be away for a few days – emails can still happily go to Barbara.

in June, and was our guest speaker on the Friday evening, supported by her impressive photographic display. Members were generous with their hosting activities, helping to make this a highly successful event. 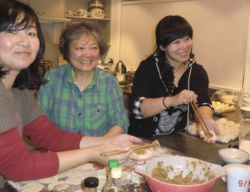 After the airport welcome on Thursday afternoon, and an orientation drive with Royden and Kathy, the first gathering was an afternoon tea at the Brudvik Lindner’s, followed by dinner at the Oriental Restaurant.

Special thanks go to Kathy and Michael Beatson for once again offering their homestay, taking their guest for a tour on Sunday, and hosting the Saturday night party.

Barbara Markland, along with June Clark and June Wild, took Baoru exploring on Friday with one highlight being a visit to Colin and Marilyn Gibbs at Lone Oak Farm with the dogs, the sheep and the cattle receiving a lot of photographic attention. Many thanks to Barbara for arranging this and to Colin and Marilyn and the animals! 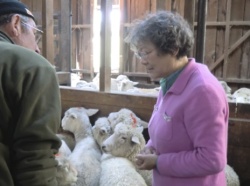 Jifang Black met Baoru in the Chinese Garden on Saturday and the two quickly set up a sisterly relationship which culminated in a frenzy of dumpling making at the Beatsons’ house for the evening party. On Monday, Bruce and Christine Ward drove Ma Baoru to Christchurch, with many a photographic stop for snowy mountains, autumn foliage, animals of all descriptions and sea views down the Kaikoura Coast. 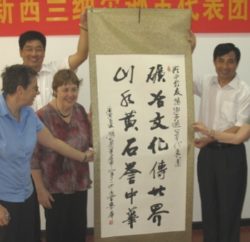 Markland, and President Christine Ward spoke at the Nelson College for Girlsassembly about its sister school in Huangshi. Our photo shows the scroll which was painted by the Principal of Huangshi Number 3 High School for the Nelson delegation to present to the NCG. It is hoped that the sister school relationship will be revived and lead to exchanges of staff and students once again.

It is likely that the Sister City Garden will be visited by a calligrapher from Huangshi in a month or two. Here in Nelson with his wife, he will make some suggestions about suitable words to be inscribed on a stone and placed in the garden as part of the original concept. 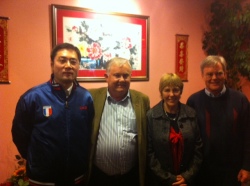 At the recent Nelson Economic Summit, our Society’s friendly connections with Huangshi were recognised as part of the on-going development of business ties with our sister city. Cheng Lei, Political Counsellor at the Chinese Embassy in Wellington, was a keynote speaker at this significant meeting that was organised by Bill Findlater of the Economic Development Agency. The evening before the meeting, Kevin Symns hosted a most enjoyable dinner in honour of the Embassy staff at the New Asia Restaurant.

NZCFS TOURS and DELEGATIONS: Nelson members have been mainstays of our NZCFS China trips over recent years, and 2012 is no exception. Adding to the Wild’s adventures in April, September journeys will include no less than 6 Nelsonians.

Prominent Persons and Society Leaders Delegation: We are delighted to announce that our Nelson Branch nominees, Marilyn Gibbs and Lillian Li, have been selected for this delegation which will be hosted by Youxie for 10 days during September. Congratulations go to these two worthy recipients of this honour which goes to a maximum of 10 New Zealanders each year. The purpose of the delegation’s visit is to build relationships and friendships between our two peoples, to visit some unique parts of China, and to attend the Fifth Friendship Forum at Changchun and the third International Friendship Cities Conference in Chengdu. This delegation will be led by National President Eric Livingstone.

60th Anniversary Tour: Under the leadership of Dave Bromwich, 4 Nelson Branch members will join this tour for four weeks in September. Philippa Reynolds, Chris Mouter and Bruce and Christine Ward will explore some fascinating sites along the Chinese Silk Road, visit project cooperatives that continue the legacy of Rewi Alley, participate in the 70th Anniversary of the Shandan Bailie School, and also celebrate 40 years of NZ-China diplomatic relations in Beijing.

A special highlight will be a visit to Kathleen Hall’s village at Sonjiazhuang where they will be able to present our gift to the village.

REWI ALLEY DOCUMENTARIES: Our website contains a lot of useful and fascinating information and is updated regularly. The links to some excellent documentaries on Rewi Alley have been posted recently under the Rewi Alley Resources sidebar on the right of this page: nzchinasociety.org.nz/rewi-alley/

• an English subtitled version of the 5-part Rewi Alley series produced for Chinese television (CNTV) in 2010.

The first episode, on Rewi’s early years, includes scenes from New Zealand and one of the interviewees is our Nelson Branch member and Rewi’s niece, Philippa Reynolds.

MEMBER NEWS: We congratulate Super (Lang Chou) Zhang on receiving her New Zealand residency and hope she stays in Nelson for a long, long time.

Unfortunately, Daphne Crampton has suffered a broken hip from a fall and we wish her a speedy recovery.

Those of you who know National Executive member and Hawkes Bay Branch President, Sally Russell, will have heard that she was hospitalised after a nasty car accident when another car crossed the road on a bridge and hit the car she was in head on. We are pleased to report that she is now home, feeling very positive and making real progress towards full mobility. We wish her all the very best.

NZCFS INTERN: As part of her French business school studies, Inès Roth le Gentil, must do an internship abroad and NZCFS is very

fortunate to have been offered her expertise for two months. Passionate about helping develop an understanding of Chinese culture among young people, she has been tasked with helping us with encouraging more young people to join the Society. While she will be based in Auckland, she will travel to several North Island branches. The NZCFS will assist her with a small grant during her stay here and we look forward to seeing the results of her work with us.  More at:

RAFFLE TICKETS: These are selling very well, with just 45 of the original 200 left. Special thanks go to those who have taken a book to promote among their wider friends and family. We will have these available at our July and August meetings unless they are all sold out. Remember that the draw will be on 1 October, 2012 and the Branch keeps $1 for each ticket sold.

NEXT MEETING: Our next meeting is on Friday 31 August – look out for the newsletter around the 22nd.

LIFE ON CAMPUS – by Ferry van Mansum and Aukje Both

The pdf is available at: Life on Campus

It is half past seven on a hot Sunday evening, the last day of a three day holiday weekend to celebrate “Dragon Boat Festival”, and we just 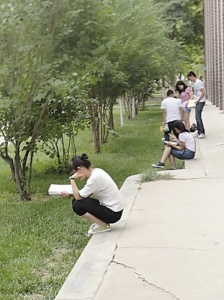 went into one of the teaching buildings to pick up some books from the English library. It is quiet in the building, but some of the classroom doors are open, and when we looked in, they were all full of students, doing some individual study. Outside the building, students are pacing the gardens, or crouching in the shade, bent over books. They can’t be in the classrooms, because they are reciting, trying to memorise whole passages of text and that would disturb the quiet ones inside. In Winter when it is too cold and too dark to go outside, reciting happens in the corridors. Students are spaced out at regular intervals taking turns stamping their feet on the concrete floor to turn on the lights. In corridors and passage ways, the lights are activated by sound, but to us it looks more like an act of frustration when those heels kick the ground. 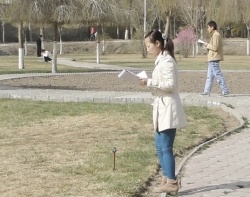 Last week a couple of English major students showed us their textbook with Abraham Lincoln’s famous speech “The Gettysburg Address” that they had to commit to memory. Now this was only a two minute speech, but I can imagine Lincoln used notes. These students had to do it without cue cards. To make matters worse, an excerpt of a two hour speech held on the same day by Edward Everett, where he compared the Civil War soldiers to Greek gods, was added to their homework. It is a near impossible task to memorise more than a page of long sentences full of sub-clauses and obscure vocabulary, but Chinese students just do it, even though they may not understand most of the content nor see the benefit of memorising large pieces of text. This is the Chinese way.

Earlier this month there was an important audit, a bit like ERO visits in New Zealand schools, and this created a lot of activity and I imagine piles of extra paperwork. One of the most visible things was that preparations were made to make campus look its best. All through the year classes are scheduled to have their turn to do a “labour week”, where students are allocated all sorts of jobs, from being messenger, gardener, grounds sweeper, classroom cleaner or, most loathed of all, toilet cleaner.

But in the days leading up to the audit, all the students were busy making everything spick andspan. Even the windows of the classrooms and dorms had to be see-through. However, I don’t think OSH (Occupational Safety & Health) would have approved of students hanging out of sixth floor dorm windows, or the creative ways steps, bricks, and a table and chair were used to create some extra height.

When the experts came, campus was cleaner than ever, the newly planted trees well watered and even the fountain near the main gate was spouting water for the first time since we are here. The students were well prepared to meet the experts, having learnt by heart the text from a booklet about life on campus at Hexi University, especially created and distributed to all students for the occasion.

Now the students are busy memorising for their end of year exams. These are revision weeks, with no new material to teach. With our peer assessments and evaluations done and grades passed on to the Chinese teachers we are watching the New Zealand film “Whale Rider” the last lessons this week, looking back at an enjoyable first semester here and looking forward to exploring more of China, a bit further afield, in our summer holiday.