“A Duo of Nelson Artists”

with Jifang Black and Rosalina McCarthy

The full pdf of this newsletter is available at: NZCFSNelsonApril2015.pdf

At our April meeting, two of our members will exhibit some recent works and share the Chinese influences which shape their artistic lives. 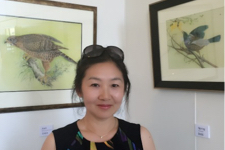 Jifang Black graduated with a degree in Art and Art History and a Diploma of Fine Arts in her home province of Shandong, before becoming curator of a large gallery in Jinan. She worked with classical paintings from the Ming and Qing Dynasties through to contemporary artwork.

Jifang has been in Nelson for 21 years and has continued to study and produce work in a range of styles. Her water colours of New Zealand native birds have proved popular and have connected Jifang’s Chinese artistic traditions with her Nelson environment.

Rosalina McCarthy is a post-graduate in Museum Studies. Her artistic journey from professional photographer to water-colourist began at Shanghai Museum where she was impressed by the colours, shapes and minimalistic approach of Chinese brush and ink work.

Rosalina has done residencies with Robert Sinclair, a Canadian water colourist. She has continued to study and work with the medium, exploring a variety of oriental themes while developing her own unique style.

As usual, we will begin at 5.30 p.m. and then enjoy our buffet meal (cost $12), at 6 o’clock. Our speakers’ presentation will begin about 7 o’clock. Friends and visitors are most welcome but please notify Barbara when you contact her so that we have accurate numbers for the meal.

LAST MEETING: President Christine gave us a fascinating  insight into how her seminars for Chinese educators on brain-friendly teaching and learning, that have been held in Christchurch and, more recently, Nelson, have initiated an education reform movement in many parts of China. Not many of our branch members will have known that Christine, as well as writing books for parents and students, is the co-author of an educational classic called “Learning to Learn” that has sold over 100,000 copies since it was published. Christine can be rightly proud of the influence she has had on teaching practice in many Chinese classrooms, especially in the Beijing and Nanjing areas. For more information, see www.brainward.com.

2015 SUBSCRIPTIONS: Thanks very much to those who have already paid their subscription for 2015 – prompt payment is always appreciated. If it has slipped your mind, payment can be made either by cheque or cash at our next meeting, by a cheque in the mail, or via internet banking. Details are on the subscription form. Please make sure you let us know if any of your details have changed by completing the subscription form, so that we can keep our records up to date.

CONFERENCE HELP NEEDED:     Your committee is doing sterling service in planning the weekend of 22-24 May, when we are hoping for more than 60 visitors to the NZCFS National Conference and AGM.

You will have received the registration information and updates that are circulating nationwide. Nelson members are encouraged to register for the whole weekend, or you might like to pop in for an hour or two to help with some specific jobs, which cannot always be covered by the committee.

We are very keen to have offers for the following jobs:

2015 MANDARIN LANGUAGE ASSISTANT (MLA): Qianlan Zhou (Gina) has arrived in Nelson, and is living at Nikau Apartments in Nile Street. She hails from Hunan Province, and is here for the school year, teaching Chinese Language and Culture under the auspices of the Confucius Institute.

She will be teaching two night classes at NMIT, four classes at Nelson Central School, two at Tahunanui School, one at St Joseph’s School, and three at Nelson Intermediate School. There is room for recruiting more schools as, at this stage, the classes are once a week only.

We are inviting Gina to be an honorary member of our branch, and be involved in our activities when she is able.

On returning to China at the end of the year, Gina will  continue with post-graduate study, majoring in Teaching Chinese as a Second Language.

HUANGSHI CELEBRATIONS: As you read this,  Bill Findlater, Barbara Markland and Gail Collingwood are on their way to Huangshi, as part of a Nelson Mayoral delegation, where they will reconfirm the sister city agreement.

Negotiations began in 1994 when the then Mayor of Nelson, Philip Woollaston, visited Huangshi with a delegation that included Robin and Beverley Brown and Isabelle Jones. The official sister city agreement was signed in Nelson 20 years ago when the Mayor of Huangshi made a reciprocal visit to Nelson.

At our March meeting, members had the opportunity to see Isabelle Jones’s photographic record of these historic occasions, and watched a video of the sights and sounds of Huangshi, produced for the city’s 60th birthday in 2010.

Philip Woollaston has sent this letter of greeting to be read at the celebrations in Huangshi:

To the Mayor and people of Huangshi

It is now 21 years since my wife and I travelled to Huangshi with Robin and Beverly Brown, Isabelle Jones and other members of the New Zealand China Friendship Society to discuss establishing a sister-city relationship. I still remember the warm and friendly welcome we were given and the wonderful hospitality we received.

A year later a delegation from Huangshi came to Nelson and I was delighted to sign, on Nelson’s behalf, the sister-city agreement linking our two cities and their people in friendship. Much has happened in the last 20 years and after many visits, exchanges and other cooperative activities, the bonds are stronger than ever.

I am delighted that the relationship is being reaffirmed on its 20th anniversary, and I am sorry that I am unable to be there in person.

If I was, I would raise a glass and say:

Hiromi Morris, President of Sister Cities New Zealand, recently visited Nelson to discuss arrangements for next year’s national sister cities’ conference. I picked her up from the airport, did some brief sightseeing, and then attended a morning tea at the NCC. Also there were Eric Davy and Pete Rainey, both city councillors, Gail Collingwood, Chair of the Sister City Coordinating Committee, Pat Jones, Lyndal McMeeking, President of the Miyazu Nelson Sister City Association, and Chris Ward from the NCC. Hiromi was to visit the Miyazu and Huangshi Gardens and also visit some possible conference venues.

The purpose of the trip is primarily to further business links but, as it is the 20th anniversary of the signing of the sister city agreement with Huangshi, there will be a re-signing and celebration. My role on the delegation is to represent the branch at that re-signing and I will only visit Huangshi. Gail will go to Huangshi and Yangjiang, which has a signed friendly city agreement with Nelson. The others in the delegation will also go to Beijing, Yantai, and Shanghai.

In Huangshi we will visit the Hubei Polytechnic University and the Donper Group (Huangshi Dongbei Mechanical & Electrical Group) whose CEO, Mr Yang Baichang, visited Nelson in December. Charles Eason has asked to meet the appropriate people to discuss environmental protection, particularly the  remediation of freshwater courses. I am going to Huangshi a day before the delegation so I will have the opportunity to meet with Appo Hocton Scholar, Sucy Sun.

China Week Nelson 2015: On Wednesday 18 March, the NZCFS was one of the participants in a discussion about the possibility of organising a “China Week”, a wonderful initiative from the Nelson City Council. Also present were representatives from the Nelson Branch of the New Zealand Chinese Association, The Refinery, various business associations, and several council departments such as festivals, sister city relationships, art, promotions, etc.

As she was going to be away at the time the meeting was to be held, President Christine had compiled a list of many possible activities for the week. Even more ideas were promulgated by those present, which just showed how much enthusiasm there was for the idea.

It was really encouraging to hear from all sides: “No problem, that is possible!”

At the end, it was decided that an event manager will be appointed by the Nelson City Council and that it would be most appropriate if the Nelson “China Week” was timed to coincide with the inaugural national Chinese Language Week that is being held from 8-13 September.

There will be activities for the business community, the Nelson public and for the local Chinese community. For this initial week, it was felt that quality is more important than quantity and that we shouldn’t plan too many activities – in the coming years China Week can gradually grow to an even bigger event.

Shandan Bailie School teacher required: The NZCFS seeks suitably qualified people to fill this position each year. Nelsonian Jane Furkert is there until July, and a new teacher is sought to start the new school year in late August, 2015.

Shandan Bailie School has a unique nature through its legacy with Rewi Alley, and the educational approach of ‘hands and mind together’ – combining academic and vocational training. NZCFS has had a long term relationship with this school, and teachers living and working here can enjoy the benefits this brings. For further information about this position, contact Dave Bromwich at [email protected].