‘What on earth are you going to do in Hong Kong for 18 days?’ This was the usual response from friends before the Wilds and Marklands set off. The answer was ’18 days may not be long enough’.

You will not hear about Nathan Road, The Peak, Temple Street Night market, Ladies Market, Bird Market, but rather the hidden side of Hong Kong. The side you have to live there, or at least spend a lot of time there, to find: heritage trails; walking trails; boat trips; fishing villages; ruined villages; country parks; beaches; islands.

Many people visit Hong Kong only on a short stopover to somewhere else, and don’t enjoy it. This will show you there is much about Hong Kong to make it a worthy destination in itself. 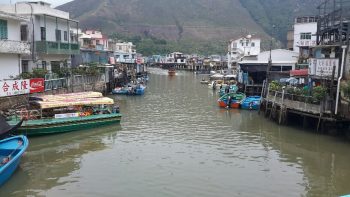 The meeting will be at Hearing House, 354 Trafalgar Square (next to Synagogue Lane). It will be preceded by a short business meeting and a shared meal costing $12 from the Nelson Oriental Restaurant. Visitors are welcome. 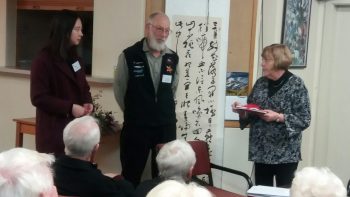 July branch meeting – We had the pleasure of welcoming new members, two new MLAs, and our new Appo Hocton Scholar. Hayley Tang introduced Xiaochen Zhu (Julie) and Xin Gao (Amy) who are joining Hayley, teaching Mandarin in 7 schools, at NMIT, and in the Mandarin Language Cluster based at Nayland College. Julie and Amy received a package of books from the branch. Alvin Schroder, as a great-grandson of Appo Hocton, welcomed Yuan Meng (Kristin) who has been awarded the NMIT/NZCFS study scholarship for this year. Kristin also received a gift package of books and the NZCFS ‘red envelope’ contribution to her scholarship.

IPP Christine, chairing the meeting, read a Rewi Alley poem ‘Roses and Potters’ written in Nelson on February 14, 1972. It made reference to events involving two of our members who were at the meeting: Gladwyn McIntyre (Rewi’s relative) and Margaret Miller (Rewi’s friend). What a coincidence!

After the meal, Jifang Black, having returned from China 24 hours previously, presented her report on the Prominent Persons and Leaders Tour and the 2016 Friendship Forum in Anhui province. Jifang showed her photographs and phone-videos of associated events. Some highlights for her were: representing New Zealand in her home country, meeting delegates from the Pacific Islands and climbing Langya Mountain. Nelson’s other delegate, Rachel Boyack, was unable to attend, but her report on the trip is published below.

On Friday 1st July I departed Nelson for what will hopefully be the first of many visits to China. I travelled directly to Shanghai with our other Nelson Delegate, Jifang Black, and we arrived in the hot, humid rainy season in Shanghai early Saturday morning.

After exploring Shanghai for two days, we left on Monday morning for Hefei, the capital of Anhui Province, for the Friendship Forum. We sped through the countryside on a bullet train and I was impressed and surprised at how lush and green the landscape in China is! On our arrival in Hefei we met with the rest of the New Zealand Delegation – NZCFS President Dave Bromwich and Jacob Daniels and Mike Queree – both teachers in China. The next day we visited parts of Hefei, including the museum and a local company Iflytech, which is competing with the likes of Google for international communications contracts. We were very impressed with their voice recognition self-drive car!

Later that day we travelled through to Chuzhou for the Forum. Present were delegations from Tonga, Fiji, Australia, USA, Micronesia, Barbados, Bahamas, Vanuatu, French Polynesia and a Maori Delegation also from NZ. During the official forum, I was privileged to give a presentation to the delegates on Christine Ward’s award-winning Art Exchange project – my thanks to Christine and Jifang for assisting with this. The presentation was very well received by delegates and Jifang received many questions about the artworks.

The following day we explored the Chuzhou area, beginning with a visit to some housing developments. I was impressed with the Affordable Housing projects that have been put in place for local farmers.

We had a beautiful lunch at the foot of the Langya Mountain, and then visited the historic sites and temple that were nestled further up the Mountain. It was quite a hike in the heat but absolutely worth it.

I left China recognising that while I’ve been exposed to the incredible history, culture and hospitality of China, I still have much more to explore and learn about this wonderful and fascinating country.

My sincere thanks to the Nelson Branch for nominating me to attend this forum.

NMIT Moon Festival – There will be a celebration event of the Moon (or Mid-Autumn) festival at NMIT on September 15. The date is set by the traditional Chinese calendar and essentially celebrates the autumn full-moon. This event promises to deliver a uniquely Nelson flavour of Chinese art & entertainment and NZCFS members are welcome to bring pot-luck food to the celebrations which will formally start at 5 p.m.

New members – We are pleased to welcome Nigel Hucklesby who is learning Mandarin at NMIT, and Roger Clark, who was introduced by James Dyer.

Kathy Beatson leaves Nelson Executive – After 10 years valuable service on our committee, Kathy is resigning due to health difficulties. Kathy was Vice President for three years, active in promoting our China Projects work, and extensively involved with local activities such as auctions, raffles, catering, and hosting. She attended several National Conferences and was a member of tours groups and a Huangshi delegation. Kathy and Michael offered their home many times for NZCFS homestays and branch gatherings, and together contributed in many practical ways to the work of the branch. Kathy will maintain her enthusiasm for China Friendship, but we will greatly miss her contributions to branch activities. Many thanks Kathy, and our good wishes for the future.

At the end of May, Bill Findlater led a group of educators to visit Lin’an and Sister City Huangshi.

We had a wonderful visit to Huangshi, hosted by the Foreign and Overseas Chinese Affairs Office of Huangshi Municipal People’s Government. The greatest delight of this was Zugui was our specific host. After our official welcome, we visited the Huangshi City Planning Exhibition Hall with Deputy Mayor Su Meilin and officials from the Municipal Education Bureau. From here we were privileged to attend a meeting with the Municipal Education Bureau. The people at this meeting included Deputy Mayor Su Meilin, Director of Education and Xu Yuanping from the Foreign and Oversea Chinese Affairs Office. We exchanged valuable comparisons of the education systems in our two countries.

In the afternoon we visited No 3 Middle School, which many Nelsonians have visited in the past due to the long relationship with Nelson College for Girls. We were treated to dinner in the school’s canteen that evening.

The following day we visited Huangshi Experimental High School and meet with the School Director, the School Secretary and Mr Liu from the Education Bureau. From here we visited Huangshi No 2 High school. This visit was followed by a press conference with the Mayor of Huangshi, where Bill Findlater presented Mayor Dong Wemin with a Nelson flag which will fly in the city’s Nelson Garden due to open in September. A meeting with the Mayor, Director of Education Fang Xiayang, and International Trade Minister Huang Wei, was followed by a very jovial lunch with Mayor Dong

We concluded our day with a visit to No 8 Middle School and Hubei Polytechnic, where Tony Gray, CEO of NMIT joined us. We were able to be present at a prizegiving ceremony here. Our hosts in Huangshi were, as always, wonderfully hospitable and it was so great to spend time again with Zugui and Miss Ping! They both sent all good wishes to their friends in Nelson.

Looking forward – Sunday, September 25: Our “Spring” garden party in the Huangshi Garden.
Friday, October 28 – Report from opening of the Nelson Garden in Huangshi

There will be a focus on Chinese language and cultural arts during New Zealand Chinese Language Week at the regular programme of cultural activities in which Mark Soper and Lillian Li-Kurtovic are involved. These programmes cover dance, artisan crafts, and language and are run at Nelson’s Community Artworks building in Achilles Avenue (ex Hunting and Fishing building).

Last year Nelson was a registered participant in the first NZCLW as part of our Schools’ Art Exchange.

Mark is requesting Chinese DVDs for showing at NMIT Moon Festival and during Chinese Language Week. If you can help, contact him: [email protected]. Alison Roxburgh has sent in this photo of the mode of transport seen so often by NZers on early trips to China. The loads carried by these converted ‘rotary hoe trucks’ and bicycles were amazing to behold – and feature in many tourist albums.

Below, a photo from the Ward’s album, was taken at a roundabout near Beijing on the way to the Great Wall. It captures the four other transport modes seen on that road in 1988: truck, bicycle, donkey-cart and foot. What does this bit of ‘highway’ look like now? A full pdf version of this newsletter is available at NZCFSNelsonAugust2016.pdf 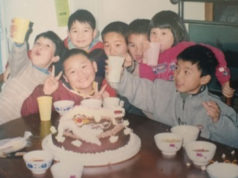 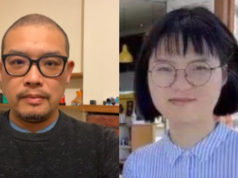 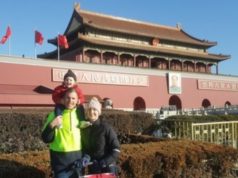