Nelson celebrated China Week and Chinese Language Week with an exciting range of events held in The Trafalgar Centre from Wednesday 28 September to Saturday 1 October. The Nelson branch of the New Zealand China Friendship Society actively participated in this celebration that was organised in conjunction with Nelson City Council and the Chinese Association and supported by other local organisations.

The Nelson Branch of the China Friendship Society hosted Race Relations Commissioner Meng Foon for the opening of China Week on Wednesday 28 September. Meng was a delightful guest with an informative, entertaining and thought-provoking address.

Meng talked about the long history of Chinese people in New Zealand. The first Chinese came to New Zealand to work the “new gold mountain” but did not want to stay as they had left their families in China and just wanted to make a fortune.  He acknowledged the Nelson descendants of Appo Hocton, the first Chinese man to come to New Zealand in 1842 and become a naturalised New Zealander. (Appo Hocton became an important member of the Nelson community and is highly regarded by our branch).

Meng, who speaks Cantonese and the Seiyap dialect as well as being fluent in Te Reo, stressed the importance of language in understanding people, their culture and the environment in which they live. He used Te Reo examples to demonstrate how place names can give meaning and clues by describing local characteristics. Understanding a language is key to understanding a culture.

Culturally there are similarities between Asian, Maori and Pacific people not always recognised by others. Being told to “look at me” when being spoken to may be acceptable in European cultures but is considered disrespectful by Asian, Maori and Pacific people. He told the story of the SS Ventnor that sank off the Hokianga while returning the exhumed bones of Chinese miners back to China. The local iwi showed respect by recovering and burying many of these bones.

Meng noted the apparent recent rise in racism against the Chinese saying that these things tend to come in spasms. Covid and media commentary on China’s presence in the Pacific have contributed to this. Racism and discrimination start when kids are young. These behaviours need to be called out. Peer pressure and supply chain are very powerful in shaping the way people think. He is pleased to see the new New Zealand history curriculum being introduced in our schools and says we should not be afraid of our history. Meng has high hopes for the success of the new National Action Plan on Racism, (perhaps something NZCFS should take time to consider fully). The more we learn, the more we understand. It is important that government is not discriminatory and that racism is not systemic. Drawing on lessons learned from his father, he said the best way to harmonious communities is to “have a cup of tea and talk with people”.

Reinforcing what we in NZCFS already know as being highly important, he said “When people get to know your culture and understand the value of culture it lessens discrimination and racism.”

As part of Nelson China Week 2022, we held two business events; Doing Business With China and Nelson Tasman Chamber of Commerce – Business After 5 with a Chinese theme.

This was the third attempt at holding the event because of earlier postponements due to Covid restrictions.

China Week was initiated in 2017 in conjunction with the then Chinese Consul General and Nelson Mayor with the view that how can you do business with our largest trading partner if you don’t know anything about their culture.

This year we again had very high calibre speakers from Australia, Auckland, Wellington and Nelson to share their knowledge. Our speakers were:

The speakers were very well received with very positive feedback from attendees. Dr De Leonardis also spoke at the Chamber of Commerce function.

Testament to the interest in the event was that three attendees drove up from Christchurch especially for the presentations.

China’s National Day culminated on Community Day on Saturday 1 October. This proved to be an extravaganza all Nelsonians could enjoy with table tennis, calligraphy, and Mahjong to try, as well as wonderful Chinese food prepared by members of the Nelson Marlborough Chinese Society with support from the Chinese Cultural Society of Wellington.

The Nelson Branch NZCFS had books to sell, and to give away, as well as a selection of Chinese mementoes gifted by the Consulate in Christchurch for the many children to take away. The branch was also responsible for the display of gifts presented to Nelson by sister cities Huangshi and Yangjiang, and for the exhibition of paintings by local children that had been digitised and sent to Wuhan for display in celebration of NZ/Hubei Week. Books and photographs relating to Appo Hocton, New Zealand’s first naturalised Chinese settler were of great interest and Alvin Schroder, a great-grandson of Appo and branch member, was acknowledged.

During the day the items presented during the dance and musical evening on the previous evening were performed again, as well as many more. Nelson Branch supported two talented musicians and a dancer from Christchurch and also contributed to the expenses incurred by performers from Blenheim.  With performers from Nelson, Christchurch, and Blenheim there was an amazing array of talent, and demonstrations of Chinese culture including a dragon dance and a parade showing Han Fu national dress, and Qipao.

This was an event to remember: bright and lively, entertaining, and a bringing together of the people in our community. 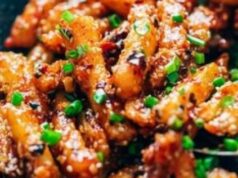 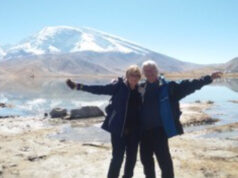 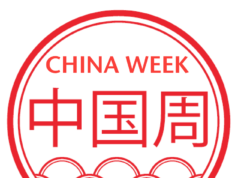 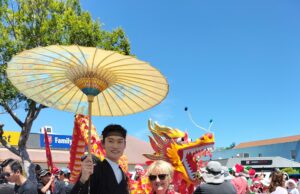 7 December 2022
The first Santa Parade in Nelson for two years was a multi-cultural event with several local cultural groups participating along with other more traditional Christmas floats. The parade was held on Sunday 4 December. Some members of the Nelson Branch...