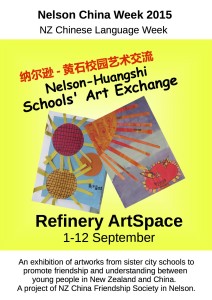 From 1 – 12 September,  the Refinery Artspace in Nelson is exhibiting artworks from sister cities schools in Nelson and Huangshi, Hubei Province.

NZCFS Nelson was awarded RAFE funding (Rewi Alley Friendship and Exchange Fund) in 2014 to arrange this Nelson-Huangshi Schools’ Art Exchange. Friendship and understanding between young people is being promoted by exchanging and exhibiting messages and artwork that has been generated in classrooms in the two cities. Two high school sister schools, two primary schools and two special education schools have works on display.

It has taken a year for the art exchange to come to fruition. Participating school classes have been taught about the educational legacy of Rewi Alley, and the long history of friendship between Chinese people and New Zealanders. Their teachers have helped students to think about the concepts of friendship and cultural symbolism, and to plan how to represent these ideas on paper.

Originals from Nelson, on display in the gallery, will be photographed and sent to Huangshi for display there later. Photographs of Huangshi art have been digitised and sent to Nelson for printing. Some originals have been brought to Nelson by recent delegations, including a range of calligraphy scrolls with friendship messages that have been presented to NZCFS Nelson to celebrate 20 years of their sister city relationship.

Over a hundred works are exhibited alongside explanatory notes in Chinese and English. Videos of participating school children will be shown, along with films of Huangshi scenery and history. At the opening on Tuesday 1 September, participating children, and their teachers and families, will be served Chinese teas and cookies to further enhance this cultural exchange. Throughout the two-week exhibition, Nelson NZCFS members will guide visitors and answer questions about the society and sister city relationships.

Our photos show three Nelson students preparing their artworks for the exhibition.