Shandan is on the move when it comes to starting up new co-operatives and rejuvenating old ones!  Black millet is a new product (at least to Shandan – we can buy it in NZ!) now identified as a very nutritious health food and one of the co-ops visited by Dave Bromwich [NZCFS President] during his recent China visit is already producing it with a new food in mind – it may be possible to make a thick ‘milk’ or a porridge gruel for busy Shanghai people ‘on the run’ out of this new product.  Machines normally for soybean milk-making (in the household) can be used to make the new products and Dave savoured the pleasant flavour during his recent tour of Shandan, as part of a tour of co-operatives in Gansu and Qinghai, with 12 Shanghai members of Gung Ho. (Members may remember that the Gung Ho co-operative movement was established by Rewi Alley in 1938 during the Japanese invasion of China.  After 1942, however, when Rewi was dismissed by Chiang Kaishek’s corrupt government, the movement petered out.  Forty years later, when Rewi was 85, he, with others, revived the movement.  The NZCFS  has continued the tradition since his death. )

This visit was invaluable for the two very different groups to meet and discuss opportunities for mutual assistance and to exchange ideas.  Name cards were exchanged and connections made to extend discussion for possible collaboration in marketing ideas.  The black millet venture was so inviting that the son of the co-op leader, having graduated from Medical School, chose instead to return home to be part of the business.

Dave was in the unusual position of being the only person present who was known to both groups, as Liu Guozhong, the NZCFS/Gung Ho co-operatives manager in the NW, was away in Sichuan leading training.  Fortunately, some forward planning had already been done when the Shanghai Gung Ho group met Dave at the unveiling of Rewi Alley’s statue in Shanghai  earlier in September.

The one-day visit to Shandan by the delegation, in addition to visiting the millet seed co-op, also took in two other co-ops, one being the Ronghua Green Production co-operative and the other, a potato co-op. The Shanghai people were most interested in medicine herbs at the Ronghua Green Coop and the co-op leader, Mr Ying, was invited to introduce his co-operative’s functions and outline their needs.  As a result of this discussion, they hope to introduce the co-operative to a researcher of herbal medicine to advise the co-operative and assist with a marketing channel.

Shandan is fortunate to be able to grow much of its production without pesticides or artificial fertiliser, a very important factor when marketing the Chinese Traditional Medicine products,(as with all produce from Shandan). Investment assistance is another possible option to be further explored.

The third co-operative was a potato venture and several different potato varieties are grown there, the delegation sampling several types for themselves.  One specimen was very dark purple, another a lighter purple, a third had red flesh, as well as the ubiquitous white.  The exotic species are already distributed in China, including Shanghai, but the profit gains for co-op members are low, at only about NZ$120 per tonne.  However, a yam co-operative leader from Chongming Island, alongside Shanghai, suggested they may be able to assist with marketing through their yam distribution channel, which is only one of several advantages made possible by the get-together.

This first visit to Shandan by the Shanghai delegation appears to have been a success and the possibilities for ongoing collaboration with Shanghai Gung Ho are very promising.  It is hard to say what the outcome will be at this stage, but as all participants on this tour are Gung Ho members, it will be feasible for the Society to encourage similar collaborations.

The millet-seed co-operative is a new start-up, whereas the Ronghua Green and potato co-operatives were participants in NZCFS co-operative development projects in 2006.

After the Shandan/Shanghai Gung Ho meeting, Dave stayed in Shandan for a further two days, and teamed up with NZCFS new Shandan teacher, Jane Furkert, who, as the students at SBS were undergoing a week of military training, was free to join him on this and other activities. These included a meeting with the Shandan Bailie School principal and discussing possible further ventures, which are still only on the drawing board at this stage. Dave also managed to meet the Shandan mayor and had a useful talk on Shandan.

Dave’s final comment on the trip was: “On the train back to Lanzhou, the countryside was the greenest I have ever seen it. This may be a combination of a controlled grazing policy, helped by some recent rain.  However, the foliage cover indicates there is definite impact from lower grazing which is very promising.” 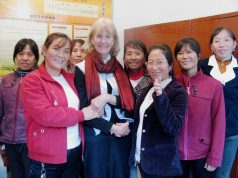