Three events were held over three days to commemorate the 125th anniversary of Rewi Alley’s birth.

Themes of contribution, compassion, achievement and spirit were presented. Here I will recount just one story retold by Mike Lee.

“ Willis Airey, who travelled in China and was a biographer of Rewi with his ‘Rewi Alley, a Learner in China’, was a history professor at Auckland University. One day he asked then student Michael Bassett if he would carry out a special mission for an important visitor. Michael agreed and went to pick up visitor to New Zealand Rewi Alley from a given address to be transported across town. The car waiting outside Rewi’s place of stay was noted, obviously SIS keeping a close watch on Rewi, and it duly proceeded to follow. After some distance Rewi remembered he had forgotten his pills, so they did a U-turn. His car paused, Rewi wound down his window and called to the following car “Don’t worry, I’m just going back to get my pills, be back soon.” That was during Rewi’s 1960 visit.

After lunch, Pat  Alley told family stories about Rewi from when he was growing up and later, news from when he was in China. Rewi had a close connection to his near family, and kept in regular contact with letters, and family made some visits to see him in China.  Dave Bromwich spoke a little on his own experience of Rewi during his travels representing NZCFS, and then the meeting was joined by friends from China. Michael Crook, Chair of Gung Ho, Li Jianping, Rewi’s secretary for the last 5 years of his life and now a VP of Gung Ho; Duan Haiying, daughter of Rewi’s first adopted son, and Kuang Ying, historian of the Shandan story. The afternoon concluded with a screening of the excellent video “Two Blades of Grass”. Narrated by David Lange this video captured the journey from Canterbury to writer and peace activist, and activity between.

The value of continuing Rewi’s spirit and his ongoing significance to the New Zealand China relationship and international peace and friendship were certainly an ongoing theme in this warm symposium.

Saturday December 3, a forum with a youth focus. A very impressive group of Chinese students, mostly engaged in ph.D studies in New Zealand, and one young man who is president of the Chinese High School Students Association. Dr Pat and Dave continued their stories, with much opportunity for open discussion. The students were moved to learn more about Rewi Alley’s family background and how his social conscience and development of social enterprise came from his parents. The young people were moved by Rewi’s sense of da ai 大爱 that he developed and practiced in his long service to China, its development and his devotion to the Chinese people.

Both days included tours through the exhibitions of the Rewi Alley Commemoration Hall.

Sunday December 4 was a picnic in the Rewi Alley Memorial Park on North Shore, alongside Rewi’s statue. Some brief speeches from Mike Dawson, Chris Lipscombe, Dave Bromwich and Feng Yan (Nancy – more about her soon) were followed by ten performances from different Chinese community groups on the North shore. Nancy, president of the Chinese Association of North Shore, Auckland City, was a tower of strength in helping to organise all three days. Other members of the planning committee were Mike Dawson, Caroline Li and the ever supportive Cathy Zhang, from the Rewi Alley Commemoration Hall in Symonds St, the venue for Days One and Two. I contributed as well.

How will our relationships be at Rewi’s 130th? Still promoting the spirit of Rewi Alley: rejuvenated if the reverence shown by the young people who participated are any indication. 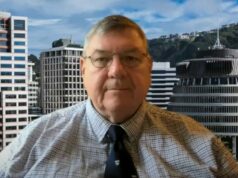 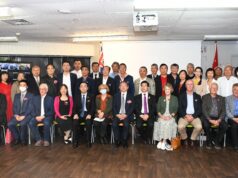 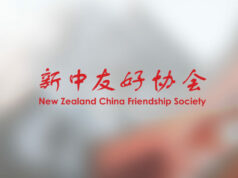