An earthquake, and a further acknowledgement of Rewi Alley. 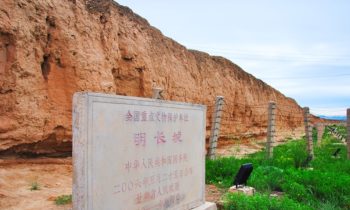 On January , at 1.45am local time, a 6.9 magnitude earthquake was felt in Menyuan county, Qinghai province, 140km north-northwest of Xining. The epicentre is on the south side of the Qilian Mountain range that separates the Hexi Corridor in Gansu with the high grasslands of northern Qinghai province. It is just 114 km from Shandan, and was felt strongly in Shandan. Liu Guozhong at Shandan Bailie School informed ‘it was strong and woke us up, some damage near the centre’.

Reports state that in Qinghai at least 4000 homes were damaged and 9 were injured, and a further 4380 in Zhangye (Gansu, the city that administers Shandan county). A 2 metre section of the Ming Dynasty Great Wall in Shandan collapsed. In Qinghai, a 22km long crack has appeared. It is reported that this is part of the subduction of the Indian plate pushing the Eurasian plate, part of the Qinghai-Tibet plateau push.

Guided by Xi Jinping Thought on Socialism with Chinese Characteristics for a New Era, the project thoroughly implements the spirit of General Secretary Xi Jinping’s important speech when he inspected Gansu. The college, the Shandan Bailie School in Gansu Province, and the Red Culture formed in the historical evolution and construction and development of the Shandan Rewi Alley Memorial Hall, dig deep into the unique red resources of Rewi Alley and Bailie School, and give full play to Rewi Alley’s spirit and Bailie culture. The function of casting soul and educating people is to build a high-level vocational education red cultural research and study travel demonstration base with prominent themes, rich content, distinctive characteristics, and the combination of production, education and research.

The demonstration base will further develop the Bailie Vocational Education Red Culture Research and Study Travel Course, highlight the revolutionary spirit, national spirit and spirit of the times in the research course, vigorously promote the internationalist spirit of Rewi Alley’s love for peace and the pursuit of justice; The Gong He spirit of “work hard, work together”; the spirit of education and practice of “using hands and brains together, creating and analyzing”; the fraternity spirit of caring for the people and selfless dedication, allowing vocational college students to receive red education, further strengthening their ideals and beliefs, and fostering family and country feelings, to strengthen the spirit of craftsmanship, to cultivate excellent skills, and to join the great cause of power.