Annual General Meeting: The first meeting of the year always includes the branch’s Annual General Meeting. Please give some thought between now and then as to whether you would like to stand for the committee. This is an opportunity to become more involved in our society’s activities. We are all committed to the NZCFS; here’s your chance to give your talents to achieve the aims of our organisation. Nominations from the floor will be accepted on the night for the roles of President, Secretary, Membership Secretary, Treasurer, and members at large.

IMPORTANT please note that to vote at the AGM, you need to be a financial member (subscription payment details below, or you can pay at the meeting).

Donna Favel graduated from Ashburton College and later went to live in Australia.

She returned to Ashburton in 1997 and bought the Regent Cinema which she and husband David run as a seven days a week operation.

In 2010, Donna ran for Ashburton District Council so she could advocate for her community, and in the latest election she successfully stood as a mayoral candidate.

As Ashburton has a rapidly growing multicultural population, Donna is very keen to see all the various ethnic groups represented by the Ashburton District Council. She wants to see her community benefit from the diverse cultural richness these groups bring to Ashburton. Donna is a strong supporter of the local Chinese people, many of whom are descended from the earliest Chinese settlers in New Zealand. She will speak at our meeting about the Chinese Village in Ashburton.

Annual Subscriptions are now due!!

I/We would like to renew/commence membership of the Christchurch Branch of the New Zealand China Friendship Society Inc. for 2017 (the financial year is January to December):

Please send your cheque (with clear name details) to:

IMPORTANT: please be sure to enter your name.

Over the last few years we have had the pleasure of several Chinese cultural groups visit us, and to be honest they just seem to get better every time. This performance certainly proved to be no exception. From start to finish, the audience was entranced.

The Wuhan Acrobatic Troupe was formed in 1953. The troupe is divided into three groups; each is headed by a leader who is usually a retired acrobat. The acrobats put in 7 hours of daily practice. Boys and girls are normally chosen at the age of 7 and training usually lasts for 6 years. A good acrobat can perform up to the age of 35 for females and 45 for males. The visiting 28 acrobats were accompanied by 7 singers, musicians, and dancers from the Wuhan Singing and Dancing Theatre. The acrobats performed items such as long-pole spinning saucers, contortions, and hand balancing performances, as well as traditional rope and Chinese hoops acrobatics. There was plenty of humour and play, from “cooks” juggling kitchen items to naughty 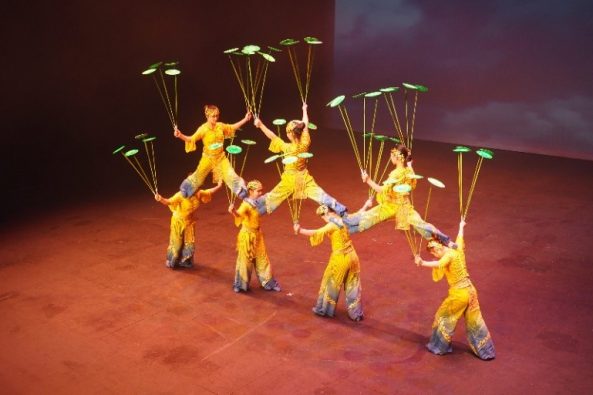 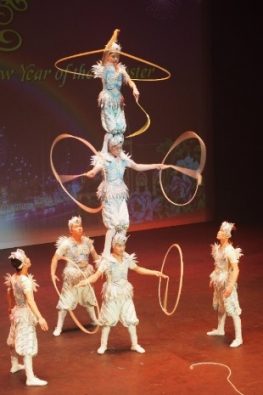 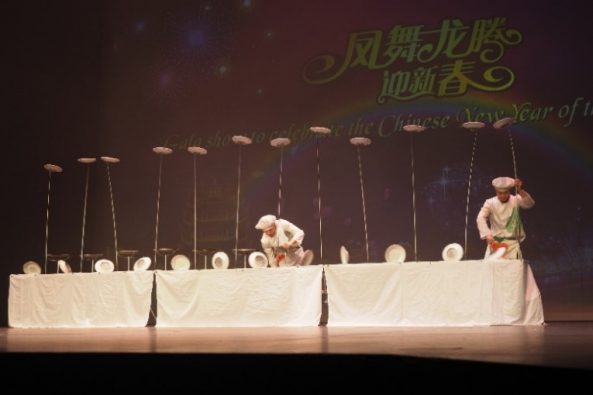 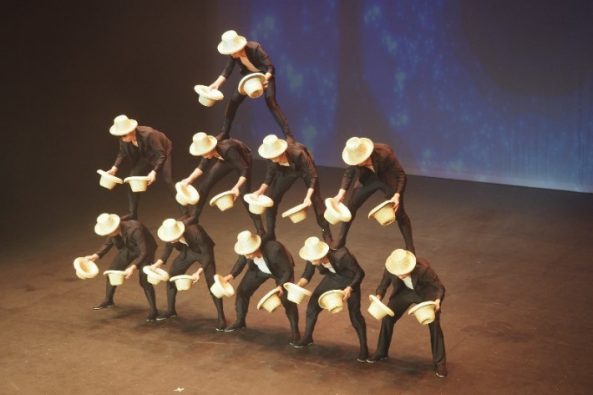 On 29 January we had our usual large crowd at what has become a very popular and anticipated banquet, which was held at North & South in Lincoln Road. The food was good, and everyone seemed to really enjoy themselves. We were honoured with the presence of Mayor Lianne Dalziel, Consul-General Mr Jin Zhijian, Speaker of the House The Right Honourable David Carter MP and Mayor Donna Favel of Ashburton. After a few words from each of them, we had a surprise – a short speech from David’s daughter Laura – in Mandarin! She has just returned from two years in China. Branch member Izzie Guo’s parents and brother are here from Gansu province at the moment, so it was great to have them come along and be our special banquet guests. 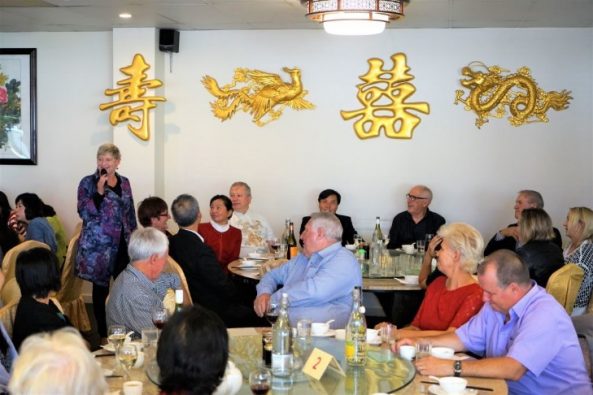 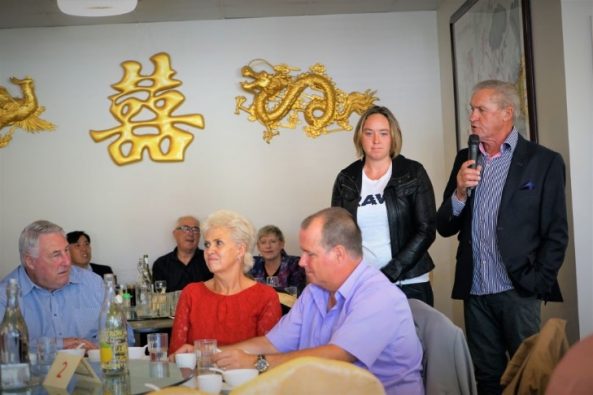 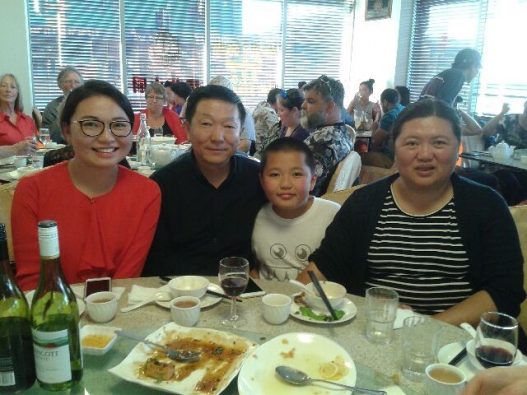 This was organized by the Overseas Chinese Affairs Office of the State Council, and was performed by about 40 artists from China Opera & Dance Drama Theatre.

It was two and a half hours of non-stop entertainment from dancing, face changing (amazing!!), erhuand flute solos, right through to acrobatics (of course there would be acrobats, it was a Chinese cultural festival after all!). However, I have to say my personal favourite was the male quartet. Their beautiful close harmony made the hair on the back of my neck tingle.11 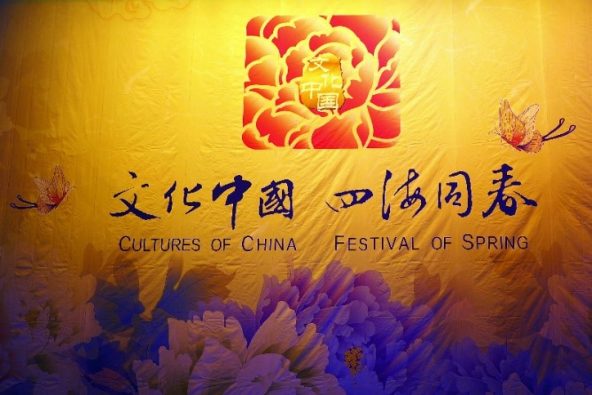 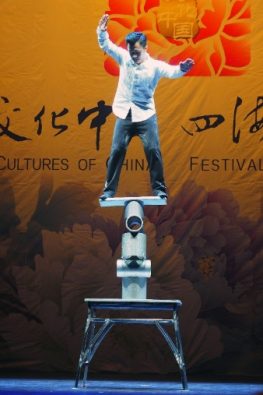 One of the projects the RAFE (Rewi Alley Friendship and Exchange) Fund committee allocated funding to in the last funding round is a Chinese garden to be built in Amberley’s Chamberlain Park. The Alley family moved from Springfield to Amberley in 1898 when Rewi was only a few months old, as Frederick had become headmaster of the school. The garden is to celebrate the work and legacy of Rewi Alley, and recognise the recently formed sister district relationship between Hurunui District and Beijing’s Changping district. Local Chinese garden designer Erin Diao and I visited the site recently and met up with youth council chair Sean Ryan and council CEO Hamish Dobbie. Erin is going to help them with design and advice. It is hoped the completed garden will include a bridge and other features. As this is the 120 th anniversary of the birth of this a

The society does annual tours in China, usually two of them. Several of our branch members have been on these tours, and know how great they are. The tours committee has recently completed its five year tours plan; details as follows:

These educational tours are semi-adventurous, and go into areas not commonly offered by commercial tour operators. They require a certain fitness and mobility, and need to retain an element of mild adventure and backblock travel. The travel is contained in specific regions. However, this does not exclude the need for some big travel days in order to deliver the ‘explore’ element. This does not exclude some big city and top attractions in each itinerary. They will include a range of scenic and cultural experiences.

2019: The South East – (Fujian, Jiangxi, Zhejiang), possible inclusion of Taiwan, to be determined.

Greater Tibet, a chance to get beyond the normal tourist route – could include Qinghai, and SE of Gansu on the Yellow River, or Sichuan, Chongqing and Yangtze River cruise.

Look at repeating the NW/Silk Road Tour again earlier than 2022.

Financial help from the 2015 RAFE funding round enabled three women from the Gansu NW China Women’s Handicraft group to visit Christchurch, Nelson, Palmerston North, Rotorua and Auckland in November 2015.  We had an article in our January 2016 newsletter on this visit.

During this time, they visited a variety of craft groups, workshops, markets etc etc and saw all kinds of craft work, including spinning and weaving, glass work, embroidery and quilting. Two of them wore their traditional clothing, and they all brought with them many examples of their finely-detailed embroidery, which caused a stir everywhere they went. The tour was a huge success, and those involved quickly realised the potential there was for a craft group tour from here to China.

The outcome is Dave Adamson intends leading a craft group tour to China in about April 2018, which will involve meeting with many ethnic communities, and experiencing their craft work and culture, taking part in craft activities as well as sightseeing too of course.