Michael Powles will speak on

China and the Pacific: An unusual (and challenging) conference in Samoa

Michael Powles, the President of the New Zealand China Friendship Society Wellington Branch, will speak on the recent conference, China and the Pacific: The View from Oceania, at the next branch meeting. Michael was hired by Victoria University to organise the conference which attracted over 150 participants, including many academics, politicians, and officials from the Pacific, China, New Zealand and elsewhere. The Conference was sponsored by Victoria University, National University of Samoa and Sun Yat-sen University of Guangzhou and was held on the campus of the National University of Samoa.

An optional Chinese buffet meal, supplied by the Fujiyama Café, will follow the meeting at 6.45pm. Orders for the $12 meal (please pay at the door) will be taken up till 6pm.  If you think you may be arriving late, please let the Secretary know at least two days before the meeting.

Please remember that 2015 membership subscriptions renewals are now due. We will endeavour to contact any members who have not yet renewed.

The dates Connolly Hall has been booked for monthly meetings this year are May 20, June 17, July 19 (Sunday), August 19, September 16, October 21 and November 18. This year’s June meeting has been changed to a Wednesday because the hall is not available on Sunday.

On Wednesday 18 March 2015 the New Zealand China Friendship Society Wellington Branch held its Annual General Meeting. President Michael Powles welcomed everyone to the meeting and acknowledged the presence of Bernie and Elaine Richmond who after many years of service to the Society are leaving Wellington. Michael presented Bernie and Elaine with a gift in appreciation for their commitment to the Society both locally and nationally. Bernie responded and expressed thanks for the support given by members and wished the Branch continued success. Michael also thanked the Committee and retiring members and especially noted Ray Brownrigg for his work in the production and distribution of the monthly Branch Newsletter, and Annette Meates for her work maintaining the membership database. The President’s Report is available on our website at https://nzchinasociety.org.nz/20196/wellington-branch-presidents-report-for-2014.

The following nominated members were elected to the positions of: Following the Annual General Meeting, Michael Powles introduced the guest speaker, Patrick English who provided an up to date account of New Zealand’s trade with the People’s Republic of China. Pat English, currently Executive Director for the New Zealand China Council, spoke about his life and work in China. In the course of some 17 years working for New Zealand Trade and Enterprise Pat spent more than 12 years living and working in China. He spent time as Trade Commissioner in several of China’s major cities and for three years prior to his posting as Consul General and Trade Commissioner to Guangzhou, he was part of the New Zealand China FTA negotiations team. In his present position with the New Zealand China Council he continues to visit China, often with the Council Chair, Sir Don McKinnon. Patrick’s talk was entertaining and frequently light-hearted and covered numbers of the pleasures and challenges of expatriate life in China. 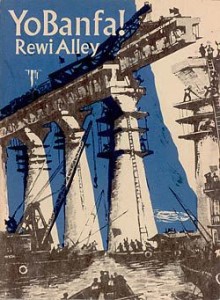 Planning is in progress by the Nelson branch which is hosting this year’s Conference. The theme chosen is “有办法 YO BANFA: There is a way!”. The focus of the Saturday programme will be presentations about initiatives being taken to pursue society goals in fresh ways, especially relating to youth work. The venue will be at the Muritai Centre at Tahunanui School. More details are in the Invitation and Draft Programme. If you are interested in attending please contact the Branch Secretary. Wellington Branch will make a subsidy of $60 towards the registration fee of its first 10 financial members who register. Register early for just $100 using the Registration Form, and you can check the accommodation possibilities and map here.

Remember to check the NZCFS Youth Website, which is available at www.nzcfsyouth.org. The site contains articles from members of the NZCFS, showing their experiences from New Zealand and China, as well as information and events. This site will be running in conjunction with the main NZCFS website. If you would like to add an article to the website, feel free to contact Kirk McDowall ([email protected]). Make sure to check out the Facebook page as well, www.facebook.com/NZCFSWellington, to learn more about this group.

Mandarin Corner (Wellington), established in 1995 by NZCFS, is a weekly event where students learning Chinese meet with native speakers of Chinese for conversation and cultural activities in a friendly, relaxed setting. Mandarin Corner is currently run by a core team of Mandarin Language Assistants. If you wish to improve your Chinese language skill, share your China experiences or talk to someone who has been or lived there, this is a great place to go. Snacks and drinks are provided. For more information contact Flora Hao at [email protected].

Please note the Mandarin corner does not run during the school holidays. It will resume on Saturday 2 May. 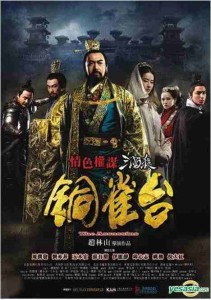 Set in the Three Kingdoms period of Chinese history, the story focuses on Cao Cao in his old age, exploring the areas of military tactics, love, and the relationship between father and son.

RED EXHIBITION BY MADELEINE SLAVICK – The Red exhibition by Madeleine Slavick runs from 26 February to 30 June on Level 3 in the main library. A collaboration between the VUW Library and the Confucius Institute, this art space showcases contemporary works that respond creatively to Chinese culture, history and society. 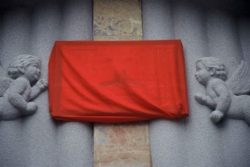 Red is the quintessential Chinese colour – double happiness, the national flag, Chinese New Year, Dream of the Red Chamber. But red is not just one colour – there are as many shades of red as there are ways of looking at them. Madeleine Slavick has lived on the outskirts of China for twenty-five years. She has on occasion ventured inland and brought back photographic memories, many tinged with reds: a shop window in Yunnan, a courtyard in Beijing, worn carpets at a hotel in Xinjiang. In this exhibition, a suite of eight photographs, entitled RED, is juxtaposed with one of Madeleine’s poems, also entitled ‘red’.

Join us for an evening of poetry to reflect on language, roots and heritage, amidst seasonal, geographical and personal change, on the ground floor at Wellington City Library.

Ya-Wen Ho and Liang Yujing, two talented Millennials who make bilingualism look easy, will read their work in English and Chinese, and share the thrills (and tribulations) of shuttling between languages and cultures. Poet, artist and zine innovator Ya-Wen Ho published her first volume of poetry with an international publishing house in 2013. Renee Liang gets inside her brain. Liang Yujing (not related to Renee) moved to Wellington from China five months ago to pursue his PhD at Victoria. His poems and translations have appeared in Salzburg Review, Modern Poetry in Translation, Westerly, Boston Review, Asia Literary Review, and Poetry NZ. 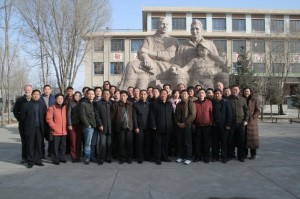 NZCFS seeks suitably qualified people to fill this position each year. Currently the position has been filled until July 2015, and a new teacher is sought to start late August 2015. A degree or teaching qualification is required. Salary offered is 3000 rmb (around US$450 per month). Airfares and accommodation are provided as part of the package. A one year position is preferred. However one semester placements will also be considered. Semesters start in late August and late February.

Shandan Bailie School has a unique nature through its legacy with Rewi Alley, and the educational approach of ‘hands and mind together’ – combining academic and vocational training. NZCFS has had a long term relationship with this school, and teachers living and working here can enjoy the benefits this brings. NZCFS has also assisted with developing and funding of small rural development projects based at the school.

For further information about this position, contact Dave Bromwich, NZCFS at [email protected]. Please note that teachers are regularly required to teach at SBS. If you are interested in this position, but the timing of this vacancy does not suit you, please indicate your interest in future vacancies to Dave. This position is filled by New Zealand applicants whenever possible.

Wellington is the Home of New Zealand’s First ‘Chinese Corner’ 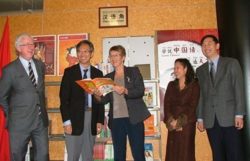 On 23 March, the ‘Chinese Corner’ sponsored by the Confucius Institute Headquarters was officially opened at the Wellington City Library, in New Zealand’s capital city. Chinese Ambassador to New Zealand Mr Wang Lutong, Wellington Mayor Celia Wade-Brown and Chairman of the Board of the Confucius Institute of Victoria University of Wellington Mr Tony Browne were among the guests that attended the opening ceremony. Ambassador Wang and the Wellington Mayor jointly unveiled the plaque for the ‘Chinese Corner’, announcing its official opening to the public.

Chinese Corner is an international book donation program sponsored by the Confucius Institute Headquarters supplying Chinese Language Teaching (CLT) books as well as other kinds of Chinese publications to academic/university libraries, public libraries and libraries in middle schools, free of charge. Besides CLT, the donation covers multimedia publications & traditional publications in fields of Chinese history, geography, art, culture, tourism, economy and social development, etc. The libraries will include the books in their collections and on their online catalogues for the public to read and borrow.

Wellington Girls’ College was the first girls’ secondary school to teach Chinese in New Zealand, and has done so continuously for 27 years. Principal Julia Davidson expressed her deep gratitude to the Confucius Institute and Hanban for the honour of being selected for a Confucius Classroom. She pledged the full dedication of the College in continuing to teach Chinese language and culture to more students in the years ahead.

Read The Radio New Zealand Voices programme about the opening of the Confucius Classroom. 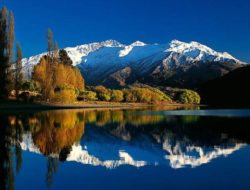 New Zealand is expecting strong demand for its 2015-16 Working Holiday plan for Chinese citizens, which opens for application on May 19, according to the country’s immigration office. Last year, the Immigration New Zealand website crashed due to the volume of traffic when working holiday visa applications for Chinese opened, and the quota of 1,000 visas was filled within nine hours. The program was launched in 2008 as part of the free trade agreement signed by New Zealand and China. An annual quota of 1,000 working holiday visas is allocated to Chinese aged from 18 to 30, allowing them to travel in the country for up to 12 months and work part time.

“To grab a working holiday visa to New Zealand is like scrambling for a train ticket during the travel rush at Spring Festival,” said Wang Lan, chief director of the Australia and New Zealand department at New Oriental Vision Overseas Consulting. Alan Barry, a counsellor at the New Zealand Immigration Office in Beijing, said that the recent introduction of the Australian Work and Holiday Arrangement to Chinese citizens is expected to complement his country’s working holiday program rather than be considered as competition. But New Zealand made a change last year to strengthen the attraction of its program. Applicants approved from Dec 8, 2014, onward, can now work for the same employer for a period not exceeding six months, instead of the previous three months. “This change was made to provide greater flexibility to New Zealand employers and to Working Holiday Scheme participants,” said Barry.

Sun Xiangfeng, who visited New Zealand from November 2011 to February 2013 with a working holiday visa that was extended by three months, welcomed the change. “Participants can now apply for a greater variety of jobs. Three months are enough for farming jobs, but technical and office employers expect a longer period,” Sun said.