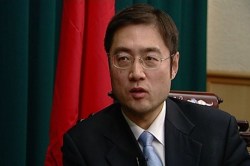 Counsellor Cheng Lei, Chinese Embassy, will speak on China’s economy and China-NZ trade relations since the signing of the Free Trade Agreement”

Cheng Lei commenced as the deputy chief of mission at the Chinese Embassy in New Zealand in December 2010.

He joined the Foreign Service in 1992 starting as a desk officer at the Department of North American & Oceanian Affairs. His first overseas post was in Washington, D.C. (2001 to 2005) where he was in charge of bilateral political relations.

Cheng holds a BA from Canton Foreign Studies University in China and a Master Degree of International Public Policy from the School of Advanced International Studies at the Johns Hopkins University. He is married with a daughter.

MEETING DATES FOR THE REST OF 2012 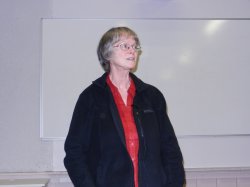 After the SGM, Margaret Hobbs (right) and Alison Viskovic (below) gave the audience a lively pictorial presentation of the April 2012 NZCFS Photographers’ Tour that saw them becoming part of the spectacular Li River scenery featured on the RMB 20 yuan banknote in Guilin; waiting patiently in line among a large group 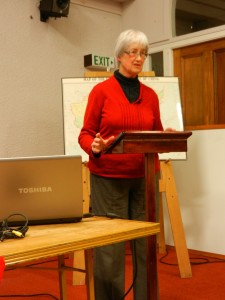 of photogenic Chinese tourists to take a picture of the most breathtaking landscape carved out of Planet Pandora on the precipices of the Zhangjiajie National Park; catching a glimpse in the mist of the gravity-defying pines of the Yellow Mountain; venturing into the ethnic Miao villages amongst local women dressed with sumptuous traditional costumes and heavy bling-bling headpieces under a giant Golden Phoenix totem; witnessing thousands of koi carp feeding in the picturesque West Lake in Hagzhou; and marvelling at the organised chaos at an intersection in Shanghai.

Captivating Images of landscapes, people, street scenes, shapes and colours surely whetted the appetite of many as the audience were treated with a nice visual overload of snippets of oriental charm, so much so that Margaret and Alison were frequently requested to “please go back to the previous photo” throughout the presentation.

Wellington branch members hosted Ma Baoru to lunch at the Grand Century on 18 June. She and Liu Guozhong, two of the three NZCFS National Honorary Members from China, visited Wellington after attending the Society’s 60th Anniversary Conference in Auckland. Guozhong and Dave Bromwich were in Wellington to participate in an International Cooperatives Conference, and Guozhong was the speaker at our branch meeting later that Sunday.

Ma Baoru works for the Hebei Tourist Bureau in Baoding, and has been extremely helpful to New Zealanders wishing to visit Kathleen Hall country, starting with Tom Newnham’s first visit and including the Kathleen Hall Centennial Tour in 1996. Recently she has monitored our He Mingqing Scholar Shen Qianqian through her nursing studies and kept in contact since her graduation.

Thanks to Mary Hall for providing homestay and looking after Baoru. They were invited to a small “hen-party” lunch at Mary Gray’s home.

Nothing is impossible for a willing heart; Faith moves mountains.

The New Zealand Contemporary China Research Centre is organising this conference with the theme: The Chinese Model of Modern Economic Development and Social Transformation

Registration is open now; NZ$65 for each participant which covers access to the opening session, roundtable, all the panels, lunch, morning and afternoon tea. Free admission for students. To register, RSVP prior to 10th August to Nastassja Van Gucht ([email protected]) with your name, title and name of your company/institution.

The worst rainstorm in Beijing in 61 years that started on Saturday (21 July) afternoon and continued late into the night has caused major disruption in the city and killed at least 37 people. 170mm (6.7 inches) of rain on average was dumped on the city with reports saying that West Beijing was hit the hardest by a mammoth 460mm downpour. Among the dramatic pictures posted on the internet by netizens and reporters showing parts of Beijing turning into fishing ponds and people picking up number plates washed away from a bevy of luxury cars stranded in the flash floods was a photo that has enthralled the public and shone like a beacon of hope for the millions affected.

It was taken by a netizen named “Rabbit” who was on the way home after work when she discovered that two workers clad in reflective clothing who looked so calm and collected stood in storm water drainage wells that had their covers blown away by water pressure in the flash floods to protect unsuspecting pedestrians and cars in the mad dash home. This photo had over 60,000 hits on Rabbit’s blog on the night the rainstorm hit and was aptly named the “Most Beautiful Lighthouse” in the world.

Set in the Cultural Revolution, the story is about how a young man undergoes a gradual transformation from “chess fool” (qi daizi) to “chess master” (90 minutes, English subtitle)

The Confucius Institute at Victoria University Wellington and VUW Continuing Education will jointly offer two Chinese language courses that will start in September 2012. ‘Chinese 1’ is an introduction to Mandarin for beginners and ‘Chinese 2’ offers a series of classes for students with a basic knowledge of Mandarin. Enroll now and enjoy the early bird fee! http://www.victoria.ac.nz/cceshortcourses/ 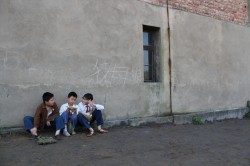 The Confucius Institute at VUW is proud to sponsor the Wellington (2, 3, 4 and 11th August) and Auckland (29 and 31st July) screenings of ’11 Flowers’ at the New Zealand 2012 International Film Festival. Directed by Wang Xiaoshuai, ‘11 Flowers’ tells the personal story of 11-year-old Wang Han who grows up during the Chinese Cultural Revolution, a year before the death of Mao Zedong. The setting of a rural Chinese village in the 70s, superbly shot against the background of a suppressed Chinese society makes this film an absolute must see. Wholeheartedly recommended by all CI staff! For more information on the screening schedule throughout New Zealand, visit www.victoria.ac.nz/ci/news-events/events.aspx#11Flowers

Following last year’s success and together with Manawatu Chinese Trust, the CI will jointly sponsor ‘Childhood Memories’, a concert of piano music featuring Jian Liu (Head of Piano Studies at the New Zealand School of Music) and a number of his students. This concert will be held in Palmerston North on 25th August and has been made possible with the kind assistance of Creative Communities Scheme. 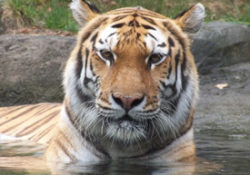 World Tiger Day, Sunday 29 July, was marked in China by the release of dozens of deer near its border with Russia in order to attract Siberian tigers over the border. Currently, there are about 500 tigers living in Siberia. The numbers have dropped alarmingly in recent years because of denuding forests and poaching. It is estimated that about 20 tigers currently reside in China. The World Wildlife Fund and local authorities co-operated to release 12 red deer and 12 sika deer into the forest at Wangqing, near Changbai Mountain in Jilin province. The deer are expected to complete the food chain of the Siberian tigers and lure more of them into China.

Fan Zhiyong a director of WWF China was quoted as saying that there are plenty of suitable places in the Changbai Mountain region for Siberian tigers to settle. Other initiatives in the region to mark World Tiger Day include reforestation, anti-poaching campaigns and population monitoring. Recent regular sightings of Siberian tigers in north east China have prompted calls for closer cooperation with Russian authorities on tiger protection and the expansion of natural reserves. (from zeenews.india.com)