Wednesday, 21 August 2013, at 5.45 pm
We shall be showing the historic documentary
Inside Red China (1957)
on restricted loan from the New Zealand Film Archive

In 1957, the Chinese People’s Association for Cultural Relations with Foreign Countries invited NZCFS President and poet RAK Mason and others to visit China.  Film makers and Society members Rudall and Ramai Hayward were part of the group, and made the documentary film Inside Red China.

The distinction of being the first English speaking foreigners to film unfettered in communist China was significant.  Rudall, born in England, had a family background in theatre and cinema and his wife Ramai, of Ngāti Kahungunu and Ngaitahu descent, were pioneer New Zealand film-makers.  A spirited, independent woman, Ramai had her own photography studio by the time she was 19 years old.  Later, she was a leading actress in Rudall’s early movies and became a talented cinematographer with her husband, producing travel, education and feature films.  They filmed in Canton, Shanghai, Peking and Wuhan.  It was a small window of opportunity for Westerners to gaze on a country that was largely a mystery to the outside world since 1949.

In 1958, the documentary screened before Rank feature films in cinemas around the country and was subsequently acquired by the Department of Education for use in schools.

The 28-minute film includes Ramai presenting a beautiful Māori feather cloak to Chairman Mao Zedong.  The cloak, a precious Maori taonga, is on loan to Te Papa and is on display until 20 October 2013.  NZCFS has partnered with Te Papa to bring the cloak to New Zealand.

After the film President Michael Powles will lead a discussion on the changing aspects in China.

An optional Chinese buffet meal, supplied by the Fujiyama Café, will follow the meeting at 7 pm. Orders for the $11.00 meal (please pay at the door) will be taken up till 6 pm.  If you think you may be arriving late, please let the Secretary know in advance. 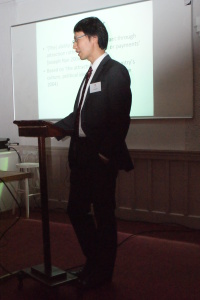 After welcoming special guests from the Chinese Embassy and NZCFS National Executive, Branch President Michael Powles introduced Dr Luo Hui, Director of the Confucius Institute at Victoria University of Wellington (CIVUW) to present his talk entitled “Whose Soft Power? Confucius Institutes from Local Perspectives”.  Wikipedia defines Soft Power as “the ability to attract and co-opt rather than coerce, use force or give money as a means of persuasion”.  While the term is generally used in a political context, Dr Luo was speaking from a local NZ perspective, as the ‘foreign director’ (i.e. the local representative) of CIVUW.

After describing the relationship between CIs and the Chinese Government, being more closely related to Education than Foreign Affairs, Dr Luo compared CIs with Alliance Française and the Goethe Institute, which also exist to promote language and culture. Comparing the numbers of such similar institutes and their inception dates showed that the Confucius Institutes have spread much more widely than most and certainly more rapidly than any of the others.  This rapid growth, says Dr Luo, has led to some people to view the CIs as a threat, and by others as a government vehicle. One key fact that should alleviate such worries is that the Institutes, while housed within a university, do not actively participate in academic affairs, except through teaching support.

While the local presence provides a way for the organisation to engage with local communities, there are several benefits to the host country.  These include the availability of a variety of resources to the local community, a say in what the Institute becomes involved with and the visits of Mandarin Language Assistants (MLAs), who visit from China to help schools with their teaching of Mandarin.  These MLAs are generally Chinese Masters students who stay with a host family and encounter the local culture and hospitality.

Dr Luo did mention how there were some sensitive situations that had arisen in his time as director.  These tended to be related to cultural differences which needed understanding and cooperation to resolve.

In conclusion, Dr Luo emphasised that CIs should be understood as vehicles of cultural diplomacy ‘with Chinese characteristics’, that soft power is a process of participation and negotiation, and that local stakeholders can augment their own soft power through the activities of the CIs.

After answering several questions from the audience, Dr Luo was invited to participate in the official announcement of the Chinese version of the NZCFS website (see next article).

After the Wellington branch meeting, the Chinese language version cn.nzchinasociety.org.nz/ of the Society’s website was officially declared open by Dr Luo Hui.  Christine Strickland, Website Administrator, presented on the screen the layout of both website versions.  She said that the English website had been running since 2011.  At the end of last year the Society’s newly appointed Honorary Patron Simon Deng Li agreed to fund the set-up and maintenance of a Chinese language version.

National President Dave Bromwich said “The Chinese language version of the website is a significant milestone in enabling the Society to inform Chinese language speakers about our objectives and activities.”  He thanked Christine and the website team for the hard work they put in the last few months.

Members who attended Mandarin Corner in the past will continue to receive notices from the new management.  For more information please contact Jingyuan Kong [email protected], phone 04 463 9549.

Tremendous thanks to our member Ellen Yang who has worked tirelessly as Mandarin Corner co-ordinator for the past four years. On 3 August, Mandarin Corner was re-launched according to an agreement between NZCFS, NZCLA (Wellington branch) and the VUW Confucius Institute.  The weekly social gathering for conversational Chinese practice is now managed by a core team of Mandarin Language Assistants at the VUW CI.  NZCFS and NZCLA will continue to support Mandarin Corner and promote it amongst their membership.  Our new philosophy of creating a friendly, fun and free space for language practice has proven attractive. We have had 20-30 people attending each week.  Whether you are a beginner or a veteran, or a native speaker keen to share your language and culture, you are most welcome to join us. Saturdays 3:15pm during school terms.  Seminar Room, 20 Kelburn Parade. 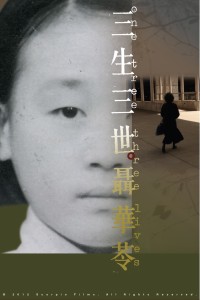 Another exciting new tour in the highly recommended “Projects” series, led by Dave Bromwich, is being offered this October.  It combines a visit to a NZCFS project, where you will meet our project partners and visit rural communities, with a comprehensive itinerary traversing diverse natural, cultural and historical sites.  Suitable for reasonably fit people looking for a total China travel experience not normally available, this tour traverses from Yanan, Shaanxi Province, in the North, to Guilin, Guangxi Zhuang Autonomous Region, in the South.

The itinerary is now up on our Society’s website and it looks superb.

The September meeting, Wednesday 18 September, will feature Lynda Chanwai-Earle who will speak about aspects of her work as a writer and broadcaster.  Also next month on Sunday September 22nd there will be the usual China National Day Dinner in conjunction with other Wellington China-focussed organisations (more details in next month’s newsletter).  Then the last two meetings for 2013 will be on Wednesday 16 October and Wednesday 20 November.

THE WELLINGTON CONFERENCE ON CONTEMPORARY CHINA 2013

The NZ Contemporary China Research Centre has organised this annual event for 20-21 August in the Hunter Council Chamber, Hunter Building, Kelburn Parade, Victoria University of Wellington.  This year the Conference brings international scholars and policy analysts together for a two-day international conference.  They will examine the trends and emerging pattern of China’s international trade, investment, and activities in other international economic sectors, analyse and explain how these trends and patterns shape global and regional economic order, and assess what medium and long term impact they have on the national economy, politics and policies of individual countries.

Minister of Economic Development, Hon Steven Joyce and Professor Xing Houyuan, Vice President of the Chinese Academy of International Trade and Economic Cooperation at the Chinese Ministry of Commerce, will deliver keynote speeches.

For conference programme, schedule and other information, please go to the conference website:

One part of the above Conference is the launch of a new discussion paper entitled China, the World Economy and New Zealand. Date: 20 August 2013, Time: 4.45 pm

Victoria University of Wellington’s Continuing Education is pleased to offer the lecture series Speaking out in China: From Confucius to the Internet – a 4 week course starts Tuesday 22 October 6:00pm-8:00pm cce.victoria.ac.nz/courses/137-speaking-out-in-china-from-confucius-to-the-internet.

Your Committee is struggling to provide the level of service to which our members have become accustomed.  Various commitments that committee members have mean that not enough time is left over to devote to society matters.  This is a call for assistance in the roles of Treasurer and Newsletter Editor, both of which are currently vacant, and the role of Secretary, which will become vacant at the AGM next March.  What we would like is for volunteers to come forward to assist the current committee in these roles, with a view to perhaps standing for the Committee at the AGM next March.