A CHINESE GARDEN FOR WELLINGTON 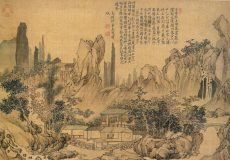 What were the various functions played by the private gardens (yuanlin園林) of China, historically, and what are some of the challenges faced in seeking to reconstruct the history of these particular cultural institutions? And what roles can such spaces play in a twenty-first century context, once transplanted elsewhere? In this talk, I will discuss some of the aspects of the Chinese garden proposed for Wellington, and the debate that has surrounded it. 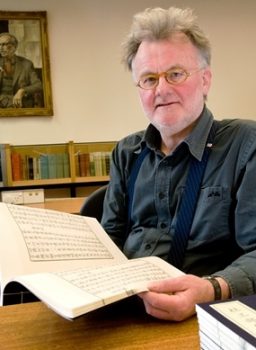 Duncan M. Campbell has taught (Chinese language, modern and classical; Chinese literature, modern and classical; and aspects of Chinese history and civilisation) at the University of Auckland, Victoria University of Wellington, and the Australian National University in Canberra. In 2015, he was the June & Simon K.C. Li Director of the Center for East Asian Garden Studies and Curator of the Chinese Garden with The Huntington Library, Art Collections, and Botanical Gardens in San Marino, USA.

An optional Chinese buffet meal, supplied by KC Café, will follow the meeting at 7pm.  Please email the Secretary in advance or book on Eventbrite before 16 August, if you wish to join us for the $13 meal. Payment for the meal can be made in advance to our ANZ bank account 11-7200-0080836-11 (please use your name as the reference) or cash at the door.

NEW MEMBERS
NZCFS extends a warm welcome to Lisa Terreni. We hope to see you all at our future meetings.

SUBSCRIPTION RENEWAL REMINDER
Please remember that 2017 membership subscriptions renewals are now due. Please renew if you have not already done so – download form here 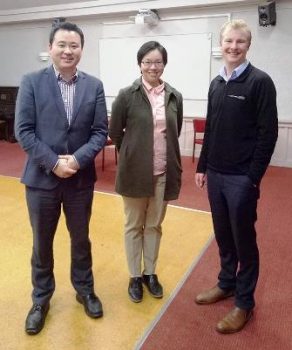 To kick start July’s branch meeting, Barbara Francis gave an impassioned speech about how the NZCFS and its members gave her the courage and belief to undertake the daunting task of assembling and typing up Agnes ‘Nessie’ Moncrieff’s letters written during her time as the YWCA secretary in China throughout the nation’s most turbulent historical period.

Following this, Jenny Chu the leader of the recent NZCFS backed Engineers delegation to China outlined the broader successes of their trip.   Highlights included gaining the opportunity to match delegates with their Chinese counterparts in areas of interest, and subsequently providing an excellent sphere for both technical, engineering based dialogue; and for facilitating greater inter-cultural understanding. She went on to cite the importance of retreading Rewi Alley’s footprints through Beijing, Shanghai and Sichuan, with fellow delegate Tom Wollerman noting the significance of the delegation’s first stop at the Rewi Alley residence in Beijing. Jenny also highlighted the improvements to accessibility within China, and the ease of travel between the major centres.

Jenny concluded by reminiscing about the fantastic hospitality the group had enjoyed throughout their stay, including the seemingly never-ending celebrations and servings of both birthday noodles and cake put on for a delegate’s birthday in Beijing.

Tom Wollermanthen took the reins, giving us an insight into the finer details of the delegation’s itinerary and activities. He noted the fantastic support provided via the New Zealand embassies and consulates in Beijing, Chengdu and Shanghai and their very different areas of emphasis within the wider New Zealand/China relationship. Where Beijing and Shanghai articulated the current state of play with a noticeably diplomatic and trade based slant, the newly opened consulate in Chengdu gave greater emphasis to notions of accessibility and regional administration.

Tom also reiterated the cultural connection felt by all delegates during their visit to the Rewi Alley residence as the first stop on their tour. This highlighted a connection which, in the eyes of the delegation, continued throughout their time in China and was demonstrated clearly in discourse with Beijing Construction and Engineering Group (BCEG), a multinational, state-owned enterprise which, in addition to conducting massive scale projects in China, is also currently involved with projects in the United Kingdom and Auckland.

He went on to present pictures of the exquisite hospitality provided by BCEG and noted that whilst the discussions gave the kiwi delegates a treasure trove of knowledge to take back with them, it also gave BCEG an equally unique and fresh perspective on shared technical issues and how the New Zealand engineering industry has adapted and innovated. The meeting with BCEG finished with the delegation getting the opportunity to venture onto a live construction site in Beijing, where both parties could discuss comparative health and safety measures, and our delegates could observe the practical application of Chinese engineering.

In addition to meeting with BCEG, the delegation also had the opportunity to discuss Beijing’s ambitious metrolink transport plan and the various technical stages and skills required to complete it. Further, delegates were treated to a tour of a working tunnel-bore machine similar to that which recently made such an impact in Auckland, but naturally on a much larger scale.

Consistent with the theme of ‘modern wonders’ Tom also spoke to the scale model of a Shanghai cityscape built on a ‘shake table’ in order to create realistic simulations of structural responses during an earthquake. Tom recounted the incredible repossession of a Shanghai bus depot, and it’s transformation into an eco-friendly outdoor space, with innovative solar panels designed to blend in seamlessly with the surrounding design. 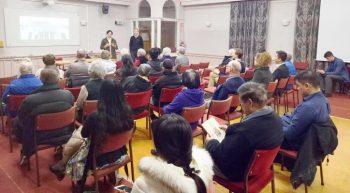 Tom concluded by giving some background on himself, the work he does in NZ for Transpower, and what comparisons could be made between NZ and China within the industry. Domestically, Tom works with the engineering infrastructure required to move bulk electricity from the geothermal, hydroelectric, and standard generator power sources, to identified load centres, and then on to local distributors, this latter stage being places like the Wellington city grid.

Although the basic premise of energy transmission is largely the same around the globe, the sheer scale necessary to achieve that objective across the world’s second largest energy grid leads to exponentially more resources across the board. Examples of this can be seen through the fact that China has enough power cable to reach the moon and back twice; and through the sheer volume of hydroelectricity produced through the Three Gorges Dam and other renewable energy sources.

It was the subject of renewable energy that lead Tom to reflect on the ambition of government driven energy projects within China, and internationally: the Chinese government’s ability to unilaterally cap coal usage in the production of electricity in 2013; the commitment to building 100,000 new transmission lines per year; and finally China’s aim to connect global energy grids in order to facilitate greater energy production through harnessing natural resources around the world. The scale and viability of China’s energy ambitions are truly a modern wonder to behold.
Text by Sam Macintosh

NZCFS Wellington President Luke Qin JP MC’ed the show with National Class One actress Zhu Danping. The performance included scenes from Yue Opera classics such as “The Peony Pavilion”, “The Injustice to Dou E”, “Jade Hairpin”, “Legend of the White Snake”, and “Butterfly Lovers” – the Chinese equivalent of “Romeo & Juliet”.

Professor Gerald Chan suggests that a new theory has begun to emerge as a result of the implementation of the ‘One Belt, One Road’ initiative since 2013. He calls this new theory ‘geo-developmentalism’ or ‘neo-functionalism with Chinese characteristics’. This theory complements yet challenges the existing model of development championed by the West under the Bretton Woods system. In this seminar, he will identify the essential features of this theory, based on evidence drawn from the launching of various mega infrastructure projects under the initiative around the world.

TheBeijing Youth Federation is pleased to invite youth members of the NZCFS to attend the 2017 International Youth Organization Forum & Beijing Sister City Youth Camp from October 23 to 29, 2017 in Beijing.

The event, co-hosted by Foreign Affairs Office of the People’s Government of Beijing Municipality, Beijing People’s Association for Friendship with Foreign Countries and Beijing Youth Federation, aims to enhance communication, cooperation and friendship among international youth organizations, expand their influence in the world, and provide a platform for them to publicize and make contact with each other.

The theme of the 2017 International Youth Organization Forum is “Youth and Innovation”. We wish to promote communications between Chinese and foreign youth with interest in the relationship between youth and governance, technology and entrepreneurship. The Beijing Sister City Youth Camp consists of a series of exciting activities, which aim to promote cooperation and development among international youth organizations.

Accommodations, meals, and local travel will be covered by the Beijing Youth Federation.  Participants will be responsible for their international travel fares and their personal expenses.

Please get in touch with NZCFS National Secretary Simon Appleton bythe 25th of August at [email protected] for more informationabout how to apply.

Following the highly successful Youth Leadership Camps in 2011, 2013 and 2015 – New Zealand Chinese Association is hosting a fourth camp on 14-17 December 2017 at Camp Adair, Hunua.This is a great opportunity for High School students of Chinese Descent in Year 11 (Form 5) to Year 13 (Form 7). The camp offers a comprehensive leadership, cultural and team building experience for Chinese students from across our community, with the added energy and enthusiasm of Albert King (inspiration and leadership motivation consultant based in Singapore).

There will be great interaction over the weekend with key speakers from a diverse cross section of leaders across our community, whilst alumni facilitators will motivate a versatile outdoor and cultural programme. The activities cover confidence courses, Chinese calligraphy, Chinese traditional dance, career booth rotations and much more to ensure an intensive and fulfilling programme for all participants.

The benefits will translate into the participants becoming more confident and capable young leaders within our community and beyond. The camp provides a stepping stone to other NZCA leadership initiatives, being the Leadership and Development Conference (for ages 18 – 30) and the social business networking forum – Future Dragonz.Please spread the word to your family, friends, sons, daughters and wider network – and register now!

The visit of three women’s handcraft cooperative leaders from NW China to Christchurch, Nelson, Palmerston North, Rotorua and Auckland in November, 2015, sparked a lot of interest among those who met them. The tour was a huge success, and those involved quickly realised the potential there was for a craft tour group from here to China.

Meet the craft workers themselves and look at various aspects of their industry from traditional styles to new product development, from training and production through to marketing.

For expressions of interest and any enquiries, please contact [email protected].