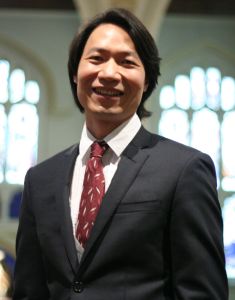 LUO Hui is Director of the Confucius Institute at Victoria University of Wellington, and a Lecturer in Chinese at the School of Languages & Cultures. He studied English and Comparative Literature in China and the US before earning his PhD in Chinese Literature at the University of Toronto in 2009. His main research interest is Chinese literature and film. He is also a prolific literary translator, with particular interest in modern Chinese poetry. When he is not busy teaching and organising cultural events, he plays the clarinet with OrientXpress, a Wellington-based band specialising in old Shanghai-style jazz.

NZCFS CHINESE WEBSITE At the end of Dr Luo’s talk we will have the official launch of our newly set up Chinese website. The website was funded by Mr Simon Deng, Honorary Patron.

Goose feather sent from afar, a trifling present with a weighty thought behind; It’s not the gift that counts, but the thought behind it

Thirty plus Wellingtonians braved a chilly afternoon to hear Dave Bromwich, recently elected National President of the New Zealand China Friendship Society, present his vision for the future. Dave’s passion for China dates back to 1990. Since then he has spent over four years, (including 25 visits), in China.

After reminding everyone of the society’s proud history of building positive relationships between the two countries over the past 60 years, he then challenged the audience by asking; what is the role of NZCFS in the coming years?

• Do we need to regenerate?

• What changes we may need to make?

Having recently returned from China where he joined New Zealand Prime Minister John Key’s delegation in Beijing, Dave highlighted the growth in business relationships, sister cities programmes and commercial tourism being examples of the changes in relationship both countries now share. He noted that NZCFS is now one of a number of players engaging in the China-NZ relationship.

Dave identified six activities that he wants NZCFS to be part of the regeneration process for the future of the organisation.

Rural poverty reduction projects remain in NZCFS’ focus for the future. To date we have contributed to the success of 54 co-operatives in three districts across two provinces. These serve as effective models, involving training for cooperative members, leaders, managers as well as promoters and agricultural technicians. We will continue to play a part in providing advisory services, coaching and mentoring for cooperatives. Dave described the ‘dynamic work’ of a 29 year old woman who formed a cooperative assisting 110 craft workers promote, market and sell their handiwork.

Accessing new sources of funding is another focus for NZCFS. Changes in NZ Government policy mean that some traditional funding opportunities are no longer available. Dave shared recent success in obtaining project funding in collaboration with a generous businessman, He Wanying 何万盈, in China. Mr He has recently obtained NZ residency. The RAFE and DENG Funds both provide new opportunities for NZCFS.

A blank slide in Dave’s presentation alerted everyone to the vacancy for a NZ teacher at Shandon Bailie School.

Attracting and engaging Youth is vital for the future of NZCFS. We need to develop innovative ways of capturing the interest of young people from both countries. Expecting young people to attend monthly meetings may not cut the mustard to achieve this goal.

Dave gave high praise to our fellow member, Christine Strickland, for her excellent work maintaining the Society’s website. This is a vital means of communication. Future enhancements in the pipe-line include a Chinese version of the website content.

Capacity building for the society’s branches is another focus for the future.

Dave reinforced his vision for a Dynamic NZCFS by quoting Rewi Alley; “有办法yǒu bàn fǎ: There is a way!” 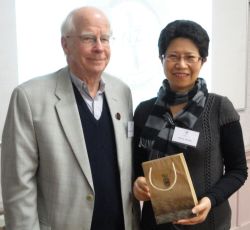 A regular participant at Wellington branch meetings has been Ms Olga Wang. Olga completes her service at the Embassy of the People’s Republic of China this month. Michael Powles presented Olga with a pounamu pendant in recognition of the contribution she has made to NZCFS during her time in Wellington. Dave Bromwich also thanked Olga and referred to her as a true friend of NZCFS, as opposed to being a ‘diplomatic friend’. In response Olga spoke of her warm affection for New Zealand and the relationships enjoyed through her association with NZCFS.

Olga introduced the new Cultural Attaché at the Embassy, Ms Yuan Yuan. Ms Yuan received a warm welcome and we look forward to her participation at our meetings in the future.

From 9-24 July, the Confucius Institute at Victoria University is sending 28 high school students of Chinese to join a 100-member New Zealand Student Summer Camp for a two-week programme of cultural activities, sightseeing and language classes in Beijing and three other Chinese cities, including Wellington’s sister city Xiamen. The 28 students recruited through the VUW CI come from a dozen different schools in the lower North Island, and they will be accompanied by three Kiwi teachers who work as tour leaders throughout the camp. This special summer camp was initiated by Mme Liu Yandong, Vice-premier of the State Council of China, on her visit to New Zealand last year.

For two consecutive weekends, on 13-14 July and 20-21 July respectively, the Confucius Institute will conduct an intensive teacher training programme in Palmerston North. Twenty-five local teachers of Chinese have enrolled in the programme. The training workshops are developed by VUW CI instructor Mr Liu Yaru ([email protected]), and this popular programme will be rolled out in other cities in the lower North Island later this year.

In August the VUW CI will kick-off another round of lively and top quality cultural events. On 28-30 August, ‘Chinese Literature Re-imagined’, a literary festival of texts, images and ideas will be held at various venues in Wellington. The programme, including a book launch, a lecture, a film screening, and a photographic exhibition featuring a fine roster of scholars, artists and writers, will be offered free to the public. For details and updates, visit our website: www.victoria.ac.nz/ci 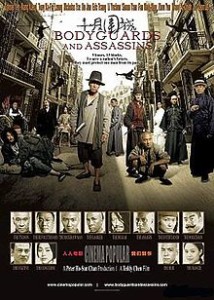 Featuring an all-star cast, this is a gripping martial arts blockbuster set in the bustling metropolis of Hong Kong in 1905. Revolutionist Sun Yat-Sen visits Hong Kong to discuss plans with Tongmenghui members to overthrow the Qing dynasty. But when they find out that assassins have been sent to kill him, they assemble a group of protectors to prevent any attacks.

THE WELLINGTON CONFERENCE ON CONTEMPORARY CHINA 2013

The NZ Contemporary China Research Centre has organised this annual event for 20-21 August in the Hunter Council Chamber, Hunter Building, Kelburn Parade, Victoria University of Wellington. This year the Conference brings international scholars and policy analysts together for a two-day international conference. They will examine the trends and emerging pattern of China’s international trade, investment, and activities in other international economic sectors, analyse and explain how these trends and patterns shape global and regional economic order, and assess what medium and long term impact they have on the national economy, politics and policies of individual countries.

Minister of Economic Development, Hon Steven Joyce and Professor Xing Houyuan, Vice President of the Chinese Academy of International Trade and Economic Cooperation at the Chinese Ministry of Commerce, will deliver keynote speeches.

For conference programme, schedule, and other information, please go to the conference website:

Your committee has organised the following meeting dates for 2013. Please mark these dates in your diary:

Open to all ages, all levels. One to one, or small groups.

13 July – Introduction of the Development of Law in China 中国法律发展简介

CHEATING NOT AN OPTION (by Luke Qin 秦瞳) 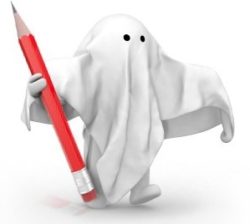 Much has been said recently about international students paying ghost writers to help with university assignments and essays. The media has a point that many international students, especially Chinese students, are under huge pressure to achieve academically and the odds are certainly against those with limited English and who are struggling to deal with life in a foreign country on their own.

Exactly how many students are gullible enough to even entertain the idea remains the question. Unfortunately we may never find out how many have fallen prey as they are unlikely to tell anyone even if they paid their money but didn’t receive the promised “goods”.

As in any culture, most students are honest and hard-working, and will go on to achieve great things in life. It’s just not worth the risk to cheat, because chances are you will get found out sooner or later. The reasons are simple. These days most lecturers/tutors will have some sort of ideas about a student’s academic ability especially in smaller classes, and most courses are structured in a way that involves a series of assignments and a final exam under supervision. Any noticeable discrepancy in writing style, grammatical usage and academic reasoning can easily raise alarm bells.

Despite the ludicrous claim that the “write-to-order” assignments are original and can get pass detection mechanisms such as Turnitin, can the guarantee from somebody who is providing a cheating service be taken seriously? Who is to guarantee a ghost writer won’t spit the dummy and get a bit creative with “copy and paste”, and is there ever going to be a refund if the student subsequently gets done for plagiarism? Will the ghost writer be disciplined for cheating? It really sounds more like a Tui billboard one-liner.

For those that got away with cheating for the time being, it wouldn’t take much for their future employers and themselves to find out that they didn’t really learn much at University and it would be difficult for them to build up the reputational quotient required to be successful in life. In the unlikely event of a cheat becoming successful, there have been plenty of cases of high profile individuals who were found to have fudged their CV or qualification, and falling from grace does happen overnight.

Try as they might, those who have offered cheating service on social blogs probably have not had much success as they would invariably have their posts shut down and their online ID’s kicked out often within minutes. Those “agents” with exemplary cold-call skills and brainy ghost writers had better channel their energy and talent into something legit and productive as it won’t be long before they bump into an undercover cop if not already. If the Police get their hands on some evidence or a list of names who have ordered cheating services, everything will come out in the wash.

I do know for a fact that one could still achieve a good grade for an academic essay with the comment “English slightly idiosyncratic but a good read notwithstanding.” The idiosyncrasy ought to be worn as a badge of honour when the honest ideas from a different perspective are able to be understood and appreciated.

However the media likes to portray it, cheating is an individual issue, and nothing will take away the fact that Chinese students are among the highest achievers in New Zealand schools and Universities.

Victoria University of Wellington’s Continuing Education is pleased to offer the lecture series Speaking out in China: From Confucius to the Internet, a 4 week course starting Tuesday 22 October, 6:00pm-8:00pm. For further details, see cce.victoria.ac.nz/courses/137-speaking-out-in-china-from-confucius-to-the-internet

Congratulations to Wellington nominees Pat Stuart (Prominent Person) and Elaine Richmond (Society Leader), who have just been selected by National Executive to take part in the tour. Pat is the Chief Executive, Wellington Museums Trust.

This is an annual invitation from the Chinese People’s Association for Friendship with Foreign Countries (Youxie). The delegation of 10 people this year will be led by Bernie Richmond, National Vice President North Island Central and Wellington Branch Immediate Past President. They will visit Guangzhou, Kunming, Xi’an, then onto the beautiful city of Wuhan, and finally departing from Shanghai City.