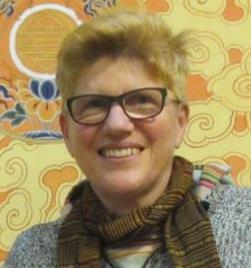 Lisa and Rachel will discuss a curriculum innovation between two kindergartens – one in Beijing, China, and one in Wellington, New Zealand. It involved a specific story which was used as a stimulus within their regular early childhood programmes. Teachers worked with the story and the children in different ways,  reflecting the different cultural and pedagogical contexts. The story telling project enhanced young children’s sense of place and cultural identity (their own as well as that of others), through the learning opportunities that were generated by the shared storytelling. 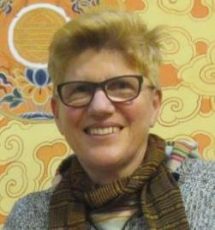 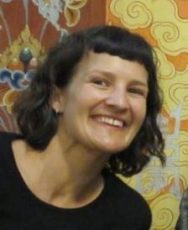 Rachel is currently undertaking a PhD at Victoria University of Wellington’s Faculty of Education. She has been involved in early childhood education as a kindergarten Head Teacher and as a childcare centre supervisor.

An optional Chinese buffet meal, supplied by KC Café, will follow the meeting at 7pm.  Please email the Secretary in advance or book on Eventbrite before 15 November, if you wish to join us for the $13 meal. Payment for the meal can be made in advance to our ANZ bank account 11-7200-0080836-11 (please use your name as the reference) or cash at the door. 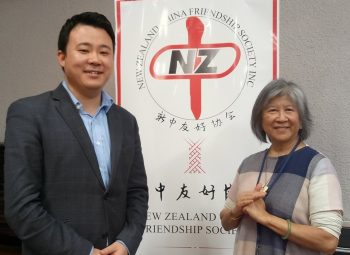 NZCFS Wellington hosted Lynette Shum, Oral History Adviser at the Alexander Turnbull Library, National Library of New Zealand at our October branch meeting. As a third-generation Chinese New Zealander, Lynette spent the first year of her life in her grandmother’s laundry on the edge of Haining Street, the then Chinatown of Wellington, and went on to complete a MA thesis about Chinese settlement in Haining Street, which she hopes to one day turn into a book.

More than a hundred years ago, Chinese immigrants congregated here and turned the street into the biggest Chinese settlement in Wellington, establishing churches, community halls, restaurants, groceries and laundries… Freshly made noodles and roast pork attracted people of other races and saw the start of cultural exchanges and integration on Haining Street. This street was also where white supremacist Lionel Terry gunned down Chinese immigrant Joe Kum Yung in cold blood in protest of the “alien invasion” in 1905, and was often an easy target during the darkest hours of Chinese settlement in New Zealand. In the present day, as Chinese immigrants are gradually accepted and assimilated by New Zealand Society, there are no longer traces of the old Chinatown. Apartments housing professionals and students have replaced the hustle and bustle of Chinese livelihood. Perhaps “disappearing” is the best ending of the old Wellington Chinatown? 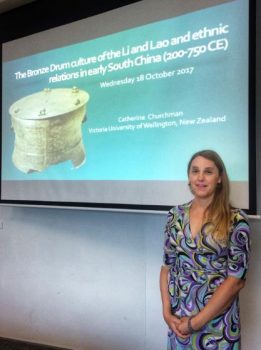 Dr. Churchman’s seminar discussed the lesser-known history of the Li and Lao people, and the impact that Imperial Chinese nationalism has had on their society. She challenged the common narrative surrounding Chinese ethnic history, particularly regarding the history and cultures of South Chinese peoples as a result of Sinicization.

The Bronze Drums, referred to as Heger drums, were the embodiment of political authority and cultural identity amongst the Li and Lao, often owned by their chieftains. However, despite Imperial China’s efforts over centuries to absorb and Sinicize them, the culture of the Li and Lao persisted. Today, these drums continue to be found in great numbers in the regions once occupied by them.

Sandwiched between the Imperial Chinese states of Jiaozhou and Guangzhou, the Li and Lao and their land were eventually conquered. Thus their history and culture, much like their drums, have largely been buried over time as the result of this Sinicization. Yet by extension, the unearthing of their drums have also come to symbolise the revival of an appreciation for the Li and Lao, and of other South Chinese cultures like theirs, as well as a refocusing on their independent place in Chinese history.  Dr. Churchman discusses this topic in depth in her book, “The People between the Rivers – the Rise and Fall of a Bronze Drum Culture, 200–750 CE” (2016).     Words by Jean Chua 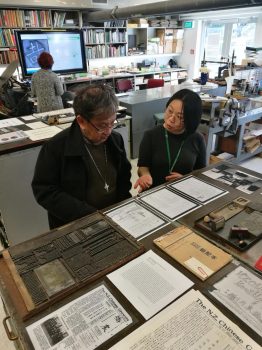 The Moon Festival celebration 2017 at Wai-te-ata Press, hosted  by Sydney and Ya-Wen, brought together members of the Chinese community plus supporters, donors and funders of Victoria’s Chinese Scholars’ Studio and Chinese Heritage Type restoration project. 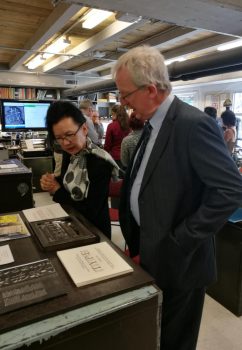 Attendees had the opportunity to view the only surviving collection of Chinese metal types in New Zealand, on long-term loan from the Dominion Federation of New Zealand Chinese Commercial Growers. Master of Literary Translation student, Ya-Wen Ho, demonstrated how she is using a high-powered microscope to capture individual sorts, flip the images, then use a web-based programme and touchscreen to hand draw and digitally identify each character for their inventory.

Some had the chance to handprint a unique Moon Festival greeting bookmark using the types. Tea, dumplings, and moon cakes which rounded out the occasion. 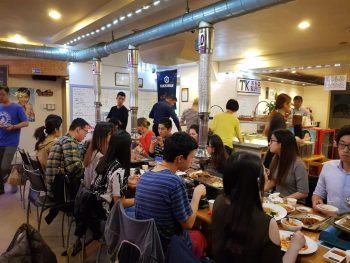 CHINA ON MY MIND, 1978 – PHOTOGRAPHS BY BARBARA LYON
Victoria University of Wellington Library and the Confucius Institute 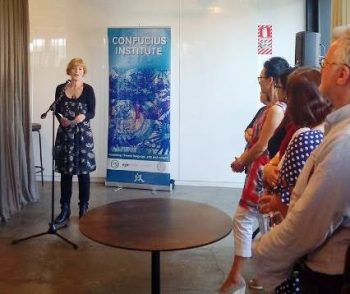 In 1978, Barbara Lyon enrolled in an Extension Studies course with the University of Canterbury, which took her across China, from Guangzhou, to Foshan, Guilin, Changsha, Shanghai, and Beijing. At that time, Mao Zedong had just passed away and the Gang of Four were no longer, making for a politically and socially unstable period in China’s history. As the Cultural 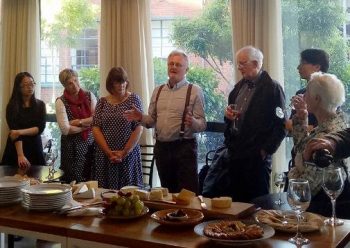 Revolution drew to a close, Barbara was there to capture the everyday impacts of these events – a nation at its height of change.

The exhibition opened on 31 October, accompanied with wine, cheese, and brief speeches from Rebecca Needham (Director at Confucius Institute, Victoria University of Wellington), Dr. Luo Hui (Confucius Institute Art Consultant), and Barbara herself. The photographs can be viewed on Level 3 of the library.                      Words by Jean Chua 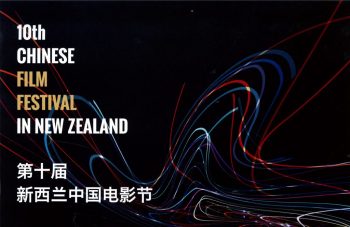 To celebrate the 45th Anniversary of the establishment of diplomatic relations between New Zealand and China, the 2017 (10th) Chinese Film Festival in New Zealand will be held from 6 to 28 November 2017, in Wellington, Auckland and Christchurch. The Opening Ceremonies in those cities were a huge success.  The Wellington opening featured speeches by distinguished guests and organisers, followed by a viewing of Operation Mekong. The festival continues efforts to showcase excellent Chinese films made in recent years to New Zealanders and strengthen the relationship between people and film makers of New Zealand and China.

Great results have been achieved in communication, understanding and cooperation between New Zealand and Chinese film industries since the commencement in alternative years (from 1998) of the Chinese and New Zealand film festivals.  In particular, significant progress in the bilateral relationship of the two countries’ film industries was made after Rt Hon. John Key and Chinese Premier Wen Jiabao signed the New Zealand and China Film Co-production Treaty in July 2011 and Television Co-production Treaty in November 2014 during the Chinese President Xi Jinping’s official visits to New Zealand.

The 2017 (10th) Chinese Film Festival is co-organised by the Film Bureau, the State Administration of Press, Publication, Radio, Film and Television and the New Zealand Film Commission. The Festival is coordinated by the Pacific Culture and Arts Exchange Centre (NZ) and China Cultural Centre in New Zealand, and is supported by the Chinese Embassy and Consulates.

In Wellington, the 11 movies comprising the Festival will be screened at Brooklyn’s Penthouse Cinema from 16 to 19 November.  General admission is $16.50, Seniors $14.50 and Children $12.50.  See here for a full programme. 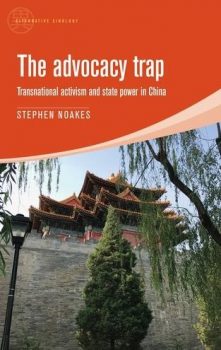 What does China’s rise mean for transnational civil society? What happens when global activist networks engage a powerful and norm-resistant new hegemon? The Advocacy Trap combines detailed ethnographic research with cross-case comparisons to identify key factors underpinning variation in the results and processes of advocacy on a range of issues affecting both China and the world, including global warming, intellectual property rights, HIV/AIDS treatment, the use of capital punishment, suppression of the Falun Gong religious movement, and Tibetan independence. Built on a unique blend of comparative and international theory, it advances the notion of “advocacy drift”-a process whereby the objectives and principled beliefs of activists are transformed through interaction with the Chinese state. The book offers a timely reassessment of transnational civil society, including its power to persuade and to leverage the policies of national governments.

Dr Stephen Noakes is Lecturer of Chinese Politics, jointly appointed to Politics and International Relations and Asian Studies. His research has appeared in journals such as Pacific Affairs, China Quarterly, Journal of Chinese Political Science, Problems of Postcommunism, Political Science Quarterly, and elsewhere. He is the author of The Advocacy Trap: Transnational Activism and State Power in a Rising China (forthcoming Manchester University Press, 2017), a regular commentator on China’s role in international affairs, and a frequent advisor to the aid community on governance issues in the PRC. Prior to joining the University of Auckland, he was a SSHRC postdoctoral fellow at the University of Toronto’s Munk School of Global Affairs, and a Visiting Research Scholar at Fudan University’s School of International Relations and Public Affairs in Shanghai, China.