Ahakoa he iti, he pounamu.
Although it is small it is precious like jade.

Sharon Painter-Arps has been a practicing artist since graduating with Honours from Otago Polytechnic in 1987. Although she majored in painting, she was equally drawn to sculpture and produced a number of Limestone carvings at art school.  Sharon believes the carver’s purpose is to bring out life in the stone.  Carving is a vehicle for social, cultural and personal commentary.  Sharon’s earlier carvings focused on cross-cultural issues and cultural identity. 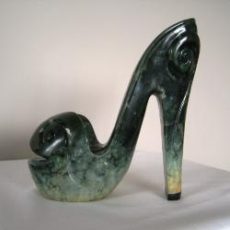 Sharon lives in Porirua and works part-time as a Host and Tour Guide at The Museum of New Zealand Te Papa Tongarewa.  Sharon’s recent ‘Unwearable Art’‘ uses contemporary carving to comment upon the pain and discomfort women put themselves through in the name of beauty.  Stone is used to amplify the hard and unwearable nature of high heels, corsets, false fingernails and eyelashes. Stone renders the object unwearable and enhances the expression of tensions between social and sexual conformity. Unwearable Art is currently on exhibition at Toi Box Gallery at Pataka Museum in Porirua.

Sharon travelled to Suzhou, China in September 2015 to participate in the National Zi Gang Bei jade carving exhibition and competition. She was awarded a silver medal, placing her ‘Masquerade Mask’, a wearable masquerade mask carved from Canadian Jade, in the top 15%. There were over 700 entries from the best jade artists from the Western world and China. Last year Sharon returned to Suzhou and secured a Gold Award for a black rose sculpture titled ‘The Temporary Nature of Life’. She also gave a presentation on New Zealand jade to the carvers and will be returning for the 10th Zi Gang Bei exhibitions and awards in November this year.

An optional Chinese buffet meal, supplied by KC Café, will follow the meeting at 7pm.  Please email the Secretary in advance or book on Eventbrite before 19 September, if you wish to join us for the $13 meal. Payment for the meal can be made in advance to our ANZ bank account 11-7200-0080836-11 (please use your name as the reference) or cash at the door.

THE GARDEN OF BENEFICENCE 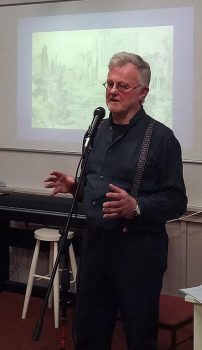 Members and friends who attended our August meeting enjoyed an insightful presentation given by Duncan Campbell on the topic of Chinese Gardens through the ages.  Duncan’s wealth of knowledge and enthusiasm on the subject captivated everyone’s interest.  Before providing an update on the development of the Wellington Garden of Beneficence, Duncan gave a short history of famous Chinese gardens.  Reference was made to Gardens located in the People’s Republic of China and beyond; including Liu Fang Yuan Garden of Flowing Fragrance located in Los Angeles, California.  Although styles have evolved throughout the dynasties, the essential elements of a traditional Chinese garden remain.  They include water, rocks, plants and structures.  Examples of structures span from sculptures to pavilions of significance to culture.  Elaborate pavilions provide poets, musicians, artists and printers with a beautiful environment to engage in their work.

Speaking as a member of the Wellington Chinese Garden design team, Duncan shared an outline of the planned Garden of Beneficence proposed for development at Frank Kitts Park.  While retaining the principles of tradition, the garden will be a modern 21st century design comprising of a series of themed spaces.  Visitors will be able to experience the story of the Chinese people’s past, present and hopes for the future in New Zealand.  Entrance to the garden will be through an elegant three arch Pai Lau named the Gate of Friendship.  A description of the various spaces of significance within the garden is available at https://nzchinasociety.org.nz/wp-content/uploads/2017/03/Chinese-Garden-Brochure.pdf. 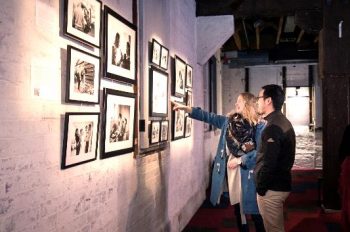 Monday, the 28th of August, saw the opening night for Lotus Roots, an art exhibition discussing experiences and perceptions of Chinese culture in New Zealand.

Featuring work from a variety of Wellington-based artists, the exhibits cover a range of media, including paintings from Aria He; a photo essay by Liam Yu; a paper-cut from Maria Ladygina; and ink drawings by Jean Chua. The exhibition also includes screenings of East Meets East, a short documentary film produced by Julie Zhu that explores the lives of first-generation Chinese migrants.

“It’s powerful stuff. Really emotional.” One patron commented, as the film came to a close, the elderly interviewee isolated in the frame before a cut to black.

The show is being hosted by Wellington Museum’s Flux Co-operative, and with the support of the Friendship Society. Lotus Roots aims to raise awareness of Chinese diaspora communities in Wellington, and to encourage engagement with Chinese culture. 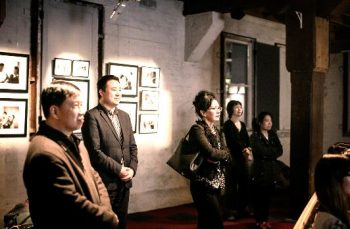 The event has been well-received, with avid discussion between the audience and attending artists during the opening night, and continuing to have steady foot-traffic through the week.

James Hurley, NZCFS Wellington Branch Committee member and the organiser and curator for Lotus Roots, hopes that the show will open the door for further events that could help make Chinese culture more accessible to New Zealanders.  Lotus Roots will remain open for two weeks, concluding on the 10th of September.

See here for more photos the NZ Embassy in Beijing shared on their weibo account.  Xinhuanet also had an article about this event.

Handcraft cooperatives and workshops visited throughout the journey will include embroidery, weaving, clay figurines, farmers’ painting (folk art), cloisonné, tie-dying, Dongba characters (ancient ‘hieroglyphic’ writing), paper cutting, straw pictures … and the chance to do some hands-on craft work.  Meet the craft workers themselves and look at various aspects of their industry from traditional styles to new product development, from training and production through to marketing.  See itinerary.

Present were representatives from the Chinese, US, Japanese and Korean Embassies, New Zealand Government agencies, City and District Councils, and member organisations of SCNZ. SCNZ President Hiromi Morris and Vice President Ray Wallace hosted the event and thanked the representatives for their continued support and contribution to the sister cities movement. NZCFS Wellington was recognised for its role in helping promote a SCNZ youth tour to China in April next year put together by SCNZ Youth & NZCFS Wellington Committee members Michael O’Neill & Elisha Hsiao. All representatives then took turns to introduce the work of their organisations, and expressed willingness to work closely together to foster international friendship and mutually beneficiary connections for New Zealand.

Wu Man has caught the world’s attention with her virtual reinvention of an ancient Chinese instrument—the lute-like pipa. Her performances have relaunched the reputation of this 2000-year-old instrument in the West, with multiple Grammy Award nominations and Musical America naming her 2013 Instrumentalist of the Year. 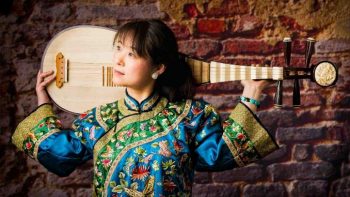 Celebrating its thirtieth season in 2017, the New Zealand String Quartet has established an international reputation for its insightful interpretations, compelling communication and dynamic performing style. The Quartet is known for its imaginative programming and for its powerful connection with audiences of all kinds.

Together Wu Man, the New Zealand String Quartet will perform a programme that spans the centuries, beginning with traditional Chinese folk music and embracing arresting contemporary scores, including pieces by Tan Dun, known for his celebrated soundtrack to Crouching Tiger, Hidden Dragon.

Following the highly successful Youth Leadership Camps in 2011, 2013 and 2015 – New Zealand Chinese Association is hosting a fourth camp on 14-17 December 2017 at Camp Adair, Hunua. This is a great opportunity for High School students of Chinese Descent in Year 11 (Form 5) to Year 13 (Form 7). The camp offers a comprehensive leadership, cultural and team building experience for Chinese students from across our community, with the added energy and enthusiasm of Albert King (inspiration and leadership motivation consultant based in Singapore).

The camp provides a stepping stone to other NZCA leadership initiatives, being the Leadership and Development Conference (for ages 18 – 30) and the social business networking forum – Future Dragonz.

The New Zealand – China Free Trade Agreement has brought increased trade and investment between the two countries. However, the definitions of some key terms in the FTA could result in different standards for Chinese entities and New Zealand entities, and different ambits for persons involved in trade in services and persons involved in investment. As the FTA upgrades negotiation is underway, it’s a good time to revisit the definitions and consider the ramifications. This seminar will discuss key FTA terms in light of New Zealand law and Chinese law.

For more information about this seminar and speaker, read here.
If you are interested to attend, please email Lai Ching or call 04 463 9549 to register. 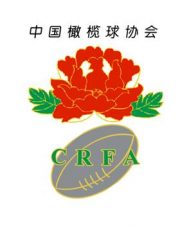 The Chinese national men’s and women’s rugby sevens teams are now recruiting globally!  Are you an excellent athlete? Do you have what it takes to compete on the international stage? Now it’s time to prove yourself! The chosen ones might be able to represent China to participate in the 2020 Tokyo Olympics! Apply now for the chance of a lifetime!

To prepare for the 2020 Tokyo Olympics, and to lay foundation for the planned Chinese Professional Rugby Football League, the Chinese men’s and women’s national rugby sevens teams will be rebuilt after the 2017 National Games. The new Chinese national teams might train overseas on a long-term basis.  All who meet the selection requirements are welcome to apply and applications are not restricted to rugby players in provincial, club, or social teams. This also includes athletes who play other sports, such as football, basketball, handball, and track field.

Recruitment criteria
Rugby players should:
Agree with the five core values of World Rugby (Integrity, Passion, Solidarity, Discipline and Respect)
Be born between January 1st, 1985 and January 1st, 2000 (Applicants with outstanding abilities who are not born during this period of time might also be considered.)