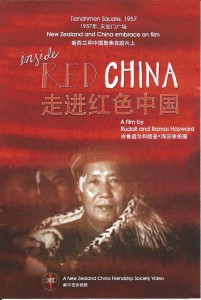 ‘Inside Red China‘, a 1958 film by then-Society members, Rudall and Ramai Hayward, will be relaunched tomorrow evening at a reception to mark the 65th anniversary of the PRC.  It will be held at the Consulate in Auckland and guests will be branch members of NZCFS.  ‘Inside Red China‘ gives an honest and unbiased report of China at a time when the West had a very jaundiced view of communism and includes rare historic footage denied to any outside of China at that time.

The film has been re-mastered into a Society-sponsored DVD,  by George Andrews, Vice President, Northern North Island.   Alistair Shaw, Wellington member of NZCFS, explains how the film came about and its significance for friendship with China; and Ambassador John McKinnon gives an explanation of how the maori cloak presented to Mao Zedong, having been lost for some years, was found again in the National Museum of China.   The cloak was then briefly returned to New Zealand in 2013 and the DVD shows the powhiri made by the Maori delegates at Te Papa [Museum of New Zealand] who received it.

The DVD is already making waves, with lots of media reports in China.  See the following links: