In 2010 NZCFS started a rabbit raising project for hamlets in poor rural areas in the interior of karst Guangxi. On 6 July 2011 NZCFS received a report from Mr. Yuan, the Animal Husbandry Technician responsible for training and advising the farmers. In the 17 households in two villages, 172 rabbits were sold between January and May this year for return of 24 Yuan ($4.50) per kg. This is 700-800 Yuan (NZ$130-150) per household for the 5 winter months when their previous average income was around 700 Yuan for the year.

The households have a range of management styles, with some selling a lot of the rabbits they have raised, while others building up their stock. Overall, eight of the initial families have increased their initial four rabbits to between 20-24, and another eight families to between 15-20 breeding stock. The income for these families is expected to increase rapidly in the second half of this year.

This year, your Projects’ Team is promoting the extension of this project to reach more families. For $80, a new household can receive a team of rabbits to get started. Read more on this website under Projects, Guangxi.

To make a donation Direct Credit to: 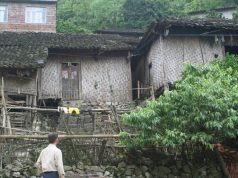