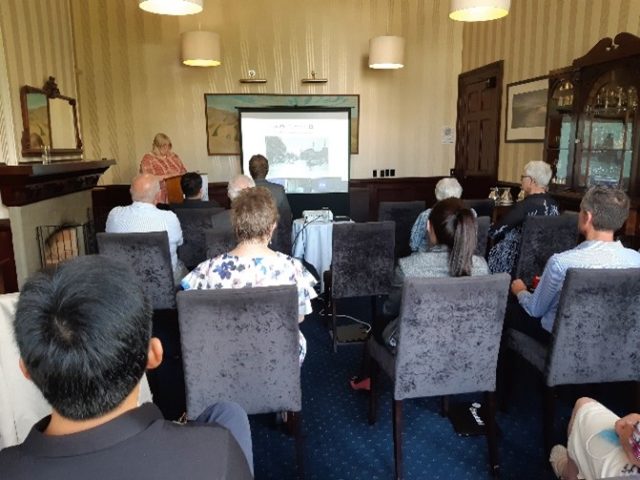 In 2017, to commemorate the 120th birth of Rewi Alley, the Rewi Alley Anniversary Commemoration Committee Canterbury (RAACCC) was formed in Christchurch, composed of representatives of the relevant organisations in the district, and a range of commemorative events were carried out during that time.

It was recently decided to commemorate the 90th anniversary of his outstanding flood relief work in Hubei Province in early 1932, when his actions saved thousands of lives. The commemoration involved the RAACCC linking with the Christchurch China Sister Cities Committee (CCSCC), which looks after Christchurch’s sister city links with Gansu province and Wuhan city. The committee contacted Wuhan City and Gansu Foreign Affairs and from this came the proposal to mark the anniversary close to Rewi’s birthday on 2 December. Because of various clashes, the date settled on was Friday 26 November.

The Christchurch China Sister Cities Committee (CCSCC) held a Zoom meeting at the Christchurch Club with officials from Wuhan and Gansu Foreign Affairs on 26 November, to which the members of the RAACCC and Selwyn and Hurunui sister city representatives were invited. 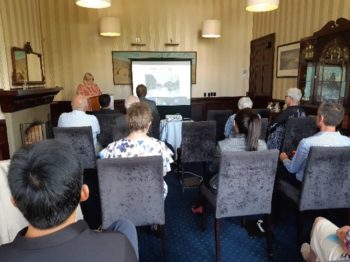 Speakers our end included Councillor Jimmy Chen, who spoke on the importance of Christchurch’s relationships with Gansu and Wuhan. Michelle MacWilliam chair of the CCSCC described the flood event in detail, the lead up to it and the long-term effect the flood has had on that region of China.

Eric Livingstone, Past National President of NZCFS and one time president of the Christchurch branch spoke on the role Rewi Alley undertook during his three or so months acting as the League of Nations representative in 1932, responsible for flood mitigation efforts for a significant stretch of the Yangtze River near Wuhan City. His pragmatic approach and no-nonsense regard for slack officialdom showed his determination to do the best for the everyday Chinese during one of the world’s greatest disasters. His achievements in bringing firm action in chaotic times resulted in the saving of many lives were outstanding, and marked the start of a period when Rewi realised one person could make a difference in such a huge country beset with such tremendous challenges. This talk was so interesting I have decided to include it here; it’s a great story and a real insight into what a remarkable man Rewi Alley was.

REWI ALLEY FLOOD & FAMINE RELIEF WORK IN WUHAN January – March 1932
In December 1931, The League of Nations representative for relief work in China, Sir John Hope Simpson, asked Rewi Alley to undertake the responsibility for the League’s relief work in Wuhan resulting from the tragic 1931 Yangzi River floods as he was committed elsewhere in China on the League’s work. Rewi Alley travelled to Wuhan at the beginning of January 1932 and had the responsibility for the dyke repair around the big three city complex of Wuhan and for two hundred kilometres up and down the river either side. Due to the extreme extent of graft and corruption Rewi Alley would not rely on reports from officials but insisted on inspecting all works himself.

Early in his League of Nations relief work in Wuhan, Rewi Alley travelled with the chief engineer for Hubei reconstruction, to Hong Hu (then called Xindi) a town of 300,000 people to inspect the dyke rebuilding where they found the whole population hard at work rebuilding the main dyke where it had been washed away. Rewi Alley returned to Wuhan and gained reluctant agreement that relief wheat could be sent to them to aid them further. Rewi Alley arranged for three large barges of American aid wheat to be sent to Hong Hu which saved many from starvation. The area around Hong Hu had two years of successive crop failures as a result of the floods and together with the opposing armies blockading the town there was an urgent need for relief food which, when it arrived saved a large number of people from starvation.

Rewi Alley stayed seven nights in Hong Hu in a small local Materials Transfer Post and in recognition of what he did for them, the local people have preserved the building as a permanent memorial to him and today his temporary residence has been restored as a Provincial Cultural Preservation Relic. Also, the Town library has a special room for Rewi Alley’s writings for the younger generation to learn more about this special friend of Hong Hu. Rewi Alley made five visits to Hong Hu and his work is acknowledged in the Hong Hu Memorial Hall. Also, in 2017 a statute to Rewi Alley was erected in Hong Hu.

On one occasion during his relief work, Rewi Alley travelled by a Changjiang River Conservancy launch to Changsha with two armed guards and an engineer. As the launch turned into the Dongting lake on its way down to Changsha it was caught in crossfire from small craft on either side. Bullets whizzed through the boat and Rewi and the engineer got down on the floor. The launch put on all speed and ran the Red blockade.
Of Rewi Alley’s work in Wuhan Sir John’s in his report to the League of Nations wrote:

“ Rewi Alley made himself indispensable to the local people. He is a most remarkable man and his work at Hankow has been beyond praise. As an instance, I may quote the dispersal of the refugees at Wuhan. Of these there were more than 300,000, and the military authorities gave a week’s notice of dispersal, and intended to scatter them at the point of bayonet to four indicated places at a distance of about 100 li from Hankow in various directions, No arrangements for feeding or housing them had been made, and had the plan been carried out, there can be no question but that thousands of them would have died of starvation and exposure. Indeed, it would probably have been a case of tens of thousands.”

“ Alley arranged for camps up and down the rivers on our works, made arrangements for supplies of food to be ready for the journey and on arrival, engaged junks, sampans and tugs, and succeeded in breaking up the refugee camps and transporting these hundreds of thousands to their new quarters without any serious accident.”

“In addition, he acted as personal assistant to General Chen and his adviser in matters regarding the Engineering Staff. He inspected all the works on the relief dykes himself; kept me personally in touch with all that was going on, and with the necessities of the case. As a result we have now 130,000 people at work in that region.” [ Report to Major Cunliffe, League of Nations, Geneva]

Rewi Alley in mid March 1932, returned along with his adopted son Alan, to New Zealand. Rewi Alley wrote in his autobiography “The relief work in Wuhan was rather a big job for me, the biggest I had attempted so far. The bitter scenes around Wuhan deepened my disillusionment with the old order and strengthened my belief that there must be a positive alternative which would give the people emancipation from oppression and suffering. One can hardly forget those days when the lowest level of people’s miseries were reached, when streets were full of flood refugees, dead babies floating on foul waters, when the relief racketeers were feasting each other with champagne dinners at the various big restaurants, when Communist kids were being executed in front of the Hankow custom house, when even refugees who organised local groups in refugee camps to try to improve things were taken away to be shot as communists.”

There were then presentations via Zoom from officials in the Wuhan and Gansu foreign affairs offices. In both cases, as well as speaking on the courageous work Rewi Alley did at a time of terrible disaster for the Wuhan area, they also reinforced the importance and value of their sister city links with Christchurch.

This was followed by a Chinese meal that evening at a local Chinese restaurant. This was a chance for all those who had been at the Zoom meeting, which included representatives from CCSCC, RAACCC and Selwyn and Hurunui districts to get together and exchange Rewi Alley anecdotes, of which there were plenty! 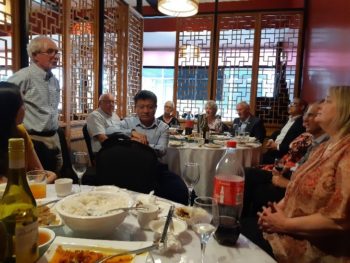 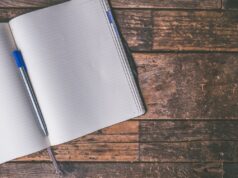 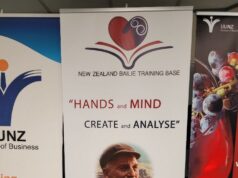