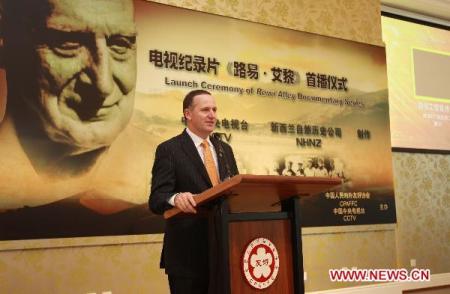 John Key speaking at a ceremony in Beijing to mark the launch of a Rewi Alley documentary.

A television series celebrating the life of an extraordinary New Zealander premiered in China on 9 July to coincide with New Zealand Day at the Shanghai World Expo. The series on Rewi Alley aired on CCTV, which has an audience of 300 million viewers. The five part series is a co-production between China’s state broadcaster, CCTV, Dunedin based production company NHNZ and the New Zealand Ministry for Culture and Heritage.

On 7 July the Prime Minister of New Zealand, the Honourable John Key, officially launched the series, at a function in Beijing, attended by distinguished guests from China and New Zealand, and co-hosted by the Chinese Association for Friendship with Foreign Countries.

The series explores the life achievements of Rewi Alley, a farmer from New Zealand who dedicated 60 years of his life to improving the lives of ordinary Chinese people. From 1927, until his death in 1987, Rewi Alley worked tirelessly in China, firstly as a fireman and factory inspector in Shanghai, and then as the founder of the “Gung Ho” industrial co-operatives, and the Bailie Technical Schools. After the formation of the People’s Republic of China in 1949, Alley was one of a handful of foreigners allowed to reside in Beijing as a guest of the Communist Party, where he became a prolific writer about China, authoring 30 books in as many years.

The biographical series was filmed in New Zealand and China earlier this year and showcases rare archive film footage and interviews with Rewi Alley’s family, colleagues and students. The series provides both a unique insight into Alley’s incredible life and an extraordinary commentary on the tumultuous events of 20th Century China. In October last year Alley won a posthumous award as one of “China’s Top Ten Foreign Friends.”

“Today Rewi Alley is revered in China and probably much better known in that country than in New Zealand,” says NHNZ Managing Director, Michael Stedman. NHNZ is currently in negotiations to create a one hour version of the production for the New Zealand market.

The five episodes, broadcast in Mandarin with Chinese subtitles, can be viewed online at the following links: