The most famous New Zealander in China – Rewi Alley contributed perhaps more than any other foreigner to the Chinese revolution.

He was the founder and inspiration for the NZ China Friendship Society, dedicating 60 years of his life to his adopted country, while remaining a New Zealander at heart.

Rewi organised thousands of industrial co-operatives during the war against Japan. He also pioneered technical training schools, the most famous at Shandan near the Gobi Desert.

Rewi Alley was born in Springfield, Canterbury, New Zealand in 1897. He went to primary school at Amberley and Wharenui (Christchurch) where his father was headmaster.

In 1912 he entered Christchurch Boys’ High School and in 1916 enlisted in the New Zealand Expeditionary Force which fought in France. He was twice wounded and received the Military Medal for bravery. Returning home at the end of World War 1 he bought a farm with an old schoolmate in the Moeawatea Valley inland from Waverley (Taranaki), where they struggled for six years of farming depression.Then he left New Zealand and headed for China, arriving on April 21st 1927. He obtained work in Shanghai as a fire officer and later as Chief Factory Inspector. During this time he saw the terrible conditions of the Chinese workers at first hand and identified with their struggles.

In the summer of 1929 during his annual leave, he travelled far inland to Suiyuan Province helping the China International Famine Relief Commission. Likewise in 1932 he worked on flood relief in Hubei Province. During the mid-1930s he became friendly with many Chinese and foreign progressive people and worked with them, sometimes in underground activities supporting the Red Army.

The Japanese invaded China in force in 1937 and Rewi became actively involved against them. He initiated and organised the Gong He (Gung Ho) movement for industrial co-operative factories in unoccupied China, working in the field in both Nationalist and Communist held areas. By 1942 they had set up about 2000 such co-operatives. Around this time he turned his main attention to schools which were training youth in the skills needed in the co-operatives. He founded these schools and called them Bailie Schools after his friend Joseph Bailie, an American missionary who had pioneered the ideas of integrating theory and practice in education in China.

In 1944 the main Bailie School was at Shuangshipu in Shaanxi Province, where Rewi had appointed a young Englishman, George Hogg, as instructor. However, with the Japanese army advancing nearer and nearer Rewi felt it was time for the school to move further inland. He chose the half-deserted ancient city of Shandan on the Old Silk road in northwest Gansu Province. They dismantled the school with its machines and other fixtures, and trekked mainly on foot over 1000km to establish the school in safety.

Rewi appointed George as Headmaster as he was often required to travel widely on Gung Ho work. Sadly George died of tetanus about a year after the school moved to Shandan. Rewi took over, several other foreign staff including New Zealanders joined him, and in the next few years the Shandan Bailie School trained hundreds of young technicians who did invaluable work in the reconstruction of post-war China.

After the establishment of the Peoples Republic in 1949 the new Government moved the school to the provincial capital of Lanzhou, where it became part of a new technical institute, the Bailie Oil School, associated with the new oil refinery at Lanzhou.

For the next thirty years Rewi worked as a writer and poet. Year after year he travelled the length and breadth of China, and wrote about what he saw, interpreting China to the world.

It was a difficult period as New Zealand had followed the lead of the United States (but not Great Britain) in recognising the old corrupt Guomindang Chinese government on Taiwan. Nevertheless many New Zealanders gave great support to Rewi Alley, especially those in the New Zealand China Friendship Society which was established as a national organisation in 1958.

After New Zealand recognised the Peoples Republic of China in 1972 attitudes changed rapidly and he received many honours in his homeland, including the Queen’s Service Order. 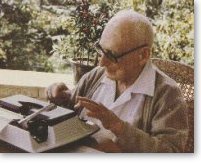 When well over 80 years of age he conceived a plan for a new Shandan Bailie School to meet the new challenges facing that desert region. With the support of the Gansu Provincial Government and friends from overseas the new school was opened on April 21st 1987, exactly 60 years after Rewi first arrived in China.

Rewi died in Beijing on December 27th 1987, not long after his 90th birthday.

The above are available postage free from CHINA BOOKS, P.O.Box 96024, Balmoral, Auckland, NZ.

‘REWI ALLEY OF CHINA’  a biography of Rewi Alley by Geoff Chapple This book is almost out of print but could be available from some bookstores. It should also be available in most libraries.

A Chronology of Rewi Alley’s Life

Review of ‘Children of the Silk Road’ by Bill Willmott (pdf)

A Brief History of Rewi Alley of China (PowerPoint Show)