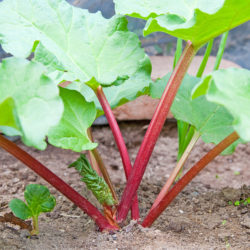 ‘A plant beloved by emperors and bartered for among nations’ – not quite the epithet you would associate with the lowly rhubarb, but that has been part of its history from extremely ancient times. An odd combination of poisonous leaves, delicious stalks and purgative root, it was first recorded in 2700BC in China and cultivated for medicinal purposes. Its name is said to be derived from Rha, the ancient name for the Volga where the plant initially grew.

It was given to the Wu Emperor of the Liang dynasty (reign: 502–549AD) to cure his fever, but only after warning him that it was a most potent drug and must be taken in moderation. It was also taken in times of plague and, in the Yuan dynasty, a Christian was sentenced to hard punishment, but later pardoned, after he healed some soldiers with it.

The Guangzong emperor (1620) is reputed to have been miraculously cured from some severe illness he got “after having had a joyful time with four beautiful women, sent to him by a high official”. Rhubarb cured him (naturally!)  [Editor’s cautionary note: While many references to this tale can be found in a Google search, it is not mentioned in the Wikipedia article for that emperor, the Taichang emperor (whose Temple name is ‘Guangzong’).  He DIED after a so-called cure, which was NOT rhubarb but a “red pill”!!!…..].

In 1790, the Qianlong emperor forbade the export of tea and rhubarb to the Russians after a border conflict and declared that Western countries “will have to manage without rhubarb”. [Editor’s note: It seems that this was based on a misunderstanding on the part of the Chinese].

In 1839, Lin Zexu, imperial commissioner, wrote a letter to Queen Victoria pointing out that “the foreign barbarians will surely die if they do not obtain tea and rhubarb from China and that the queen should stop the wicked British merchants from trading opium”. Unfortunately, Victoria never seems to have had the letter translated and read to her, and when Lin Zexu later the same year wrote to the British merchants in Canton, telling them that a stop to the rhubarb trade would mean death for the pitiful foreigners, the pitiful foreigners responded with cannon boats. Perhaps the Opium War should really be named the Rhubarb War!

On a more serious note, Lin Zexu had been ordered to stamp out the opium trade which he was unfortunately unable to do and thus was exiled. His house in Fuzhou, Fujian province, is now a temple and also a national convention centre for drug-control training and he is honoured as a hero.

It is now known that although various types of rhubarb grow in different parts of the world (Altay, Siberia, the Himalayas, Tibet and Mongolia), true rhubarb, which offers such special active purgative elements, is the Chinese variety (Rheum Palmatum) which is only grown in mountainous regions of Gansu province, NW China.

Marco Polo knew all about Chinese rhubarb and mentions it several times in accounts of his travels in China. As a result and because Venice was an important trading centre, Chinese rhubarb was widely used in European pharmacy. The earliest know usage of rhubarb as a food appeared as a filling for tarts and pies.

In about 1777, Hayward, an apothecary of Banbury in Oxfordshire, UK, began cultivating rhubarb from seeds sent from Russia, which produced an excellent drug and was sold as the genuine rhubarb and sold by men dressed up as Turks. When Hayward died, he left his rhubarb plantations to the ancestor of the present cultivators of the rhubarb fields in Banbury, which, in turn, had been the source of plants imported into New Zealand in the 19th Century.

So, the next time you put manure on your rhubarb plant, show reverence! It has had a long and adventurous history!

Based mainly on information from: http://www.rhubarbinfo.com/history