(Please note that you need to press the buzz to the left of the Wakefield Street entrance, asking the security to let you in if no one is at the entrance. Txt 0210306853 if you cannot get in.) 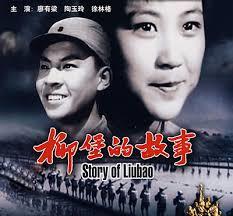 Li Jin, a solider of the New Fourth Army, stayed in Liubao village with his Army. During Lin Jin’s stay, he fell in love with a local girl – Ermeizi. But he had to leave Liubao with his troops for years. Lin Jin and Ermeizi lost contact during the war. Several years later, Jin returned to liubao and met Ermeizi again and they lived happily ever after.  [Its theme song “the Sunny Day” is probably the best known love song in China in the 1950-60s.]