From our new correspondent: “There’s a Chill in China”

Business news editor in Beijing, Henry Acland, has kindly written describing China’s weather and the equally cold subject of China’s current affairs.  He has also agreed to send us articles on a regular basis about current aspects of life in China….., in the style of Alistair Cook’s ‘Letter from America’.

Originally from Geraldine in the South Island, he completed an MA in politics at Auckland University with a focus on Asia and media and at the same time worked for NZ Asia Institute where he presented a couple of papers on East Timor’s independence.  He has also been an NZ Government advisor.

His first article describes the feeling in Beijing at the moment (February, 2014).  He says some parts of the economy are reeling from a drop in luxury goods and services sales.  He goes on to explain that this is because of a huge crackdown by the Government on corrupt officials spending their ‘easy-earned’ cash on luxuries.

Snow and Frugality in Beijing

“It hadn’t snowed or rained in Beijing for over a hundred days.  But snow did come at last – on the first official working day after the Spring Festival break. 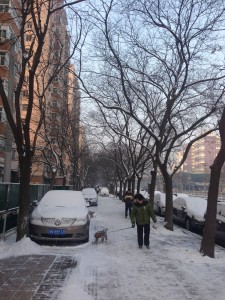 Snow is great!  Aside from giving the dusty old capital a fairytale look, it cleans it and gets rid of many of the germs floating about, or so my Chinese friends say.

It was good to kick off the first working day of the New Year with a bit of a cleanse.

“But much of the cleaning going on in China at the moment isn’t the result of the weather, it’s due to President Xi Jinping’s anti-corruption drive.  Corruption is a big problem in China and Xi is now saying ‘Enough is enough’.

“Actually, so did the previous administration, though Xi’s words seem to hold more weight than that of his predecessor.  Even before Xi became president, the media were full of propaganda about China’s anti-corruption drive.  But what were the results of the drive?  I never heard anything first hand!

“Now, however, it seems everyone is talking about the crackdown on lavish spending by officials.  Although it is not big-time corruption: (overspending on gifts, banquets and overseas trips by officials), it is certainly not condoned here.  You would have been forgiven for thinking otherwise before Xi Jinping.  For years, China’s leaders have been campaigning against such waste of Government funds.  Not until recently though had there been signs that certain sectors of the economy were reeling because of the crackdown (a word the media here love to use).  Sales of luxury goods and services have been hit hard.  It was surprising to hear how detailed the crackdown has become, and I can’t see any other reason why sales of fancy goods and services are suffering when nothing else has been hit that badly.

“It’s become like an anti-drink/driving campaign with Government agents stationed, so I was told, at gas stations over the holiday break, lying in wait to catch officials red-handed.  Apparently they checked Government cars as they pulled up to refuel.  If a car was packed with loads of pricey gifts, the official was then investigated.

“Recently I was talking with an Italian who’d been in China longer than I have. He’d been working selling expensive foreign wine, Italian I suspect, down in Ningbo and he’d just moved back to Beijing, before getting out of the country for good!  He said that sales of high end wines had been hit really hard because of officials not making their usual expensive purchases. And that’s just one story, I’ve heard others.  So economic risks are increasing in China a little as the Government pushes forward with its anti-corruption drive, as Xi vows to strike “the flies as well as the tigers” – that means to fight corrupt officials both large and small.

“There’s a lot of news on this topic and sales of maotai have been seriously hit and also a new regulation forbidding smoking and giving cigarettes to officials at all levels of Government has dented sales of pricey cigarettes. That regulation was introduced just before Spring Festival.

But perhaps the most serious event concerns Zhou Yongkang, who was a member of the previous Politburo Standing Committee and Minister of Internal Security. He’s rumoured to be under investigation for graft.  If he is brought to trial, it will be the biggest corruption scandal in China ever … bigger than the Bo Xilai one because Zhou is more powerful. He would be the highest-ranking Party member ever prosecuted for corruption.

“It’s been obvious for years that something had to be done. Taxi drivers in Beijing, whom I talked with, were disgruntled. They said they’d got nothing out of China’s extraordinary growth, apart from dirty lungs from the air pollution!

“So, is Xi being smart?  As President, he’s moved quickly to quell dissatisfaction among the laobaixing (ordinary folk) by making the officials sweat.  But he would also have made some powerful enemies among the governing elite and, of course, there are many businessmen who are suffering from a downturn in sales, as well.

“This year is going to be a fascinating one for China, as many problems come to a head.  Xi is obviously cognisant that keeping the factory workers and other low-income earners on his side is a wise idea.  It means that that the Laobaixing  are less likely to take their grievances out on him, if, for instance, the country’s shadow banks collapse and liquidity dries up, leaving millions of people out of pocket.  (‘Shadow banks’ are unregulated moneylenders or loan ‘sharks’, an all-too-frequent source of money in China).

“I don’t like to scaremonger and I’ve written positively on China’s economy before (see links below), but from reading what’s in the media, both domestic and international, this year is going to be a challenging one for China.  The economy has to change.  The Chinese leaders acknowledge this, but the previous administration did not do enough, in my opinion.  The Government is struggling to stop property prices from climbing.  A large percentage of properties are merely investments with no occupants in them, even though there is a shortage of housing for the general public. So these two issues coupled with the U.S. Fed’s intention to stem its stimulus is having an impact here – it will dry up the cheap money.

“So how would this all affect New Zealand’s economy?  It has been said that “China is where New Zealand’s economic future is being built”.  At present New Zealand’s exports are doing extremely well, with China now being New Zealand’s  largest export market – mainly due to increased sales of milk products and pinus radiata logs.  Fonterra’s problems appear to have been largely forgotten and hopefully it should not affect their future trade with China.

“So, there are a lot of risks. But even if China’s economy experiences a hard landing, I can’t see New Zealand’s dairy sales to China being hit that hard. And with regard to reining in officials’ lavish spending … well that’s not going to influence New Zealand milk and log sales to China. They are not luxury goods. And the recent change of events should not discourage smaller NZ companies from pursuing sales and co-operation in China.  Companies like Hamilton-based BioVittoria, which has a Chinese subsidiary and specialises in Monk Fruit – a product of China and only grown there, are probably safe if they work in the humble, hardworking style of Rewi Alley.  He was instrumental in helping China set up many successful co-operatives and education programmes and is recognised as one of the 10 well-loved friends of China.

“Territorial disputes, particularly the one with Japan, could have an affect on trade … not only with Japan but also its allies. New Zealand may escape any fallout if it avoids taking sides.  Of course, New Zealand and China have always co-operated in many ways useful to both countries because of their historical ties, so we wouldn’t want to ruin this friendship by wading into a messy territorial squabble.

“Finally, China’s economy is coming off the boil.  Growth is slowing,  but unless something rather major were to happen, either domestic instablility, mass anti-Government protests for instance or conflict in the East China Sea, then I can’t see much change in New Zealand’s trade relations with China.

“New Zealand’s economy today goes hand-in-hand with China’s.  Let’s hope that Xi Jinping can resolve its problems to the satisfaction of most, if not all, his countrymen in the coming months and years.”